Margie Singleton: A country music hitmaker, witnessing for Christ in her 80s 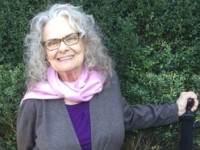 The release of the gospel album 'On The Other Side Of Life' by renowned country singer and songwriter Margie Singleton is remarkable for two reasons. Firstly, it demonstrated that Margie, who in the past had written hits for George Jones, Faron Young and even Brook Benton, could still write memorable songs of gospel truth. Secondly, it showed that even at age 80, she could sing them with passion and power.

Margie was born Margaret Louis Ebey on 5th October 1935. In 1949, at the age of 13, she married Shelby Singleton and in 1957 she signed with Starday Records and released her first single. The following year she made her professional debut on the renowned Louisiana Hayride. In 1959, her song "Eyes Of Love" became a major hit, reaching the Top 20. Two years later, she switched to Mercury Records and with husband Singleton producing, she recorded a duet with country giant George Jones, "Did I Ever Tell You". That was followed by another country hit, "Waltz Of The Angels". In 1963 she made her first appearance on the Grand Ole Opry, had another hit with the song "Old Records" and numerous performers including Tammy Wynette and Charley Pride recorded her songs.

A duet with Faron Young, "Keeping Up With The Joneses", became another major country hit, but the following year Margie was divorced from Shelby Singleton. That same year, she married singer, songwriter and record producer Leon Ashley. With Ashley Records, she enjoyed a Top 60 hit with her husband, "Hangin' On". Margie even charted with a cover version of Bobbie Gentry's "Ode To Billie Joe".

She toured with her husband Leon with the Country Music Spectacular, and with his band, Strings Of Nashville. He died in 2013. Singleton returned to the studio and in 2015 released the gospel set 'On The Other Side Of Life'. More recently, she has issued a gospel single, "Jesus Is My Pusher". Margie still continues to sing and record, and to operate Ashley Records.

This extraordinary singer, songwriter and woman of faith spoke to me from her home in Tennessee. I began by asking her whether the song "Keeping Up With The Joneses" was her biggest hit.

Margie: It probably was - me and Faron Young. Before that, I was the first woman to do a full album with George Jones. My husband, Leon Ashley - he passed away four years ago - we had "Hangin' On", a pretty big hit. And also "Four O'Clock". I had "Old Records" in 1963.

Tony: At Cross Rhythms we play music by Christians because we believe that something of their faith will come through in their music even if they're not specifically singing about the Lord.

Margie: I totally agree. There are some songs that I recorded years ago that I would not sing now, because I am a Christian. But I think that the love songs, the good story about life and love and heartbreak, are still viable to sing. We're called to sing. Some people think you shouldn't be singing the secular music, but I still sing "'Ode To Billie Joe"' - a big hit for me - "'Old Records"' and "'Keeping Up With The Joneses". Those songs are nothing but love and heartbreak songs, not cheating and drinking. I feel perfectly all right to sing those songs. But I am recording gospel now. I have the gospel CD that I did called 'On The Other Side Of Life'.

Tony: One of the criticisms of country music is that it focuses too much on things like drunkenness and adultery.

Margie: I don't do those anymore. I never really did much about those things. I recorded "Walk On By" by Leroy Van Dyke. To me, that's a cheating song. I don't sing it anymore. Much of country focuses on that, but a lot of it focuses on love.

Tony: In Christ we have the best subject matter of all.

Margie: I'm going to be 84 years old in October. My husband, Leon Ashley, we worked for 48 years in the business together, singing and doing concerts all over the country. When he passed away in 2013, I didn't want to sing anymore. I didn't sing from 2006 to 2016. I didn't think I could do it without him. But the Lord brought me back with this gospel CD. I wrote all the songs in it except one. It's from the heart. I'm in the process of doing another gospel album as we speak. I should've had it already out, but I have to go with the flow of who's doing it.

Tony: Tell me about some of the songs on 'The Other Side Of Life'.

Margie: 'On The Other Side of Life' is about my husband's passing. "On the other side of life, if you get there before I do, wait for me. I'll be coming soon." Talking about being at Jesus' feet, both of us together. There's one called "I Chose You", which speaks for itself. Today, when I sing it, it's one of the best songs on that CD, and I do it on every concert; but first of all, God had to choose me. I should've put that in there somewhere. He chose me first, and then I chose him. But I think he understands, because he let that song be there, and he gave it to me to write. "Heaven Bound" speaks for itself. "Peculiar People" is an awesome song. You know in the Bible where it says God's people are a peculiar people? When you hear it, you'll understand. I'm one of those peculiar people made by the hands of God. It's an up-tempo, happy thing. My husband Leon has one, and I put it in there because it's such a good song. My husband and I wrote "Making Payments" together: "Making payments on a mansion, everything you do, each prayer, is a payment." "His Destiny" is a good song. Jesus could've come down from the cross, but he knew that was his destiny. Do you remember "On My Father's Side"? I didn't know at the time it was a big hit. That's the only one I didn't write.

Tony: Were you and your husband Christians throughout your career?

Margie: We both had traumatic first marriages. When we met, we were in the world. But once you've been with God he pulls you back. He knew our destiny. We did come back to the Lord some 30 years ago. We lived for him and we walked the road. We certainly were Christians. Before I met Leon, he was a preacher. He had such a bad divorce - it's a long story I won't go into - he felt he was not worthy to preach anymore. He got out of the ministry, but he never stopped witnessing. I was raised in the Holiness church, the Church Of God; he was in the United Pentecostal Church. The United Pentecostal Church believe in baptism in Jesus' name, according to Acts 2.38. I was raised to be baptised in the Father, the Son, and the Holy Ghost, which is not a name. You've got to say Christ. So he brought me to that understanding by pointing it out to me in the Bible. He said, "I don't want you to take my word for it. I want you to read it and let God lead you." And he did. When I read that, my eyes and my heart opened, and he brought me back to that truth. We were with the Lord at that time.

Tony: Tell me about your single, "Lost In Cyberspace". That's an intriguing title.

Margie: Look on YouTube and you will see it. I am so illiterate where a computer is concerned, so I didn't understand SnapChat and LOL and all that stuff. It's a very funny song. I had the idea for it, and I told my friend Joe Rucker, who is an excellent artist. He thought it was a great title, and we got together and wrote it with a young friend of ours who knew all these things you say like SnapChat and LOL.