Maria Long: A Texan reaching "Basement kids" with her 'Here With Me' album 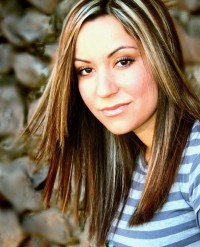 The song "Here With Me" by Maria Long speaks about going through the worst of days and calling on God to be with the singer in her pain. It's a particularly powerful cut from her outstanding 2006 independent album of the same name which has received Cross Rhythms Radio airplay. I meet up with Maria in Nashville. The singer/songwriter may pass for being in her early 20s but she confesses that she's actually 30. "That is what everybody tells me," she laughs. "I think it's mainly because of my great diet of French fries and Taco Bell! Most teenagers are like, 'You at the most look 22!' It freaks them out. But I think that at 22 I just wasn't ready to do this, you know? And I think sometimes God calls you at any age to serve him and he calls you when he knows that he's given you experiences and made you ready to do it."

She continues, "I really feel like that's why now God is pushing me into doing music, because I've had those experiences that I can share. I want to communicate that no matter what they're going through, no matter how hard life gets, there's someone there with them always that will never leave them, that will always love them." It's a very simple message. But she still gets a response. "I have people that will come to me in tears or write me letters later, or give me money because they want to support my ministry. I feel bad! I'm like, 'You need to take some CDs for this money!' They'll just give it to me because they really believe in it. It's funny because I never planned on recording." Maria pauses for a second with tears in her eyes and continues, her voice breaking, "It's overwhelming to me that God would allow me to serve him. It's cool because when you make a CD you think, of course my friends will buy it and my parents, my mom, you know? But you never think that other people will see what you see. I think that's the coolest part about it; that people are really being moved by it."

It seems inevitable that Maria Long would throw her entire life into making Christian music. Her parents were travelling gospel singers in Texas and beyond. "My parents are very passionate Christians. They spent a lot of time with us and tried to get us to understand God better through their lives. My parents were very involved in the church. My dad was the head elder and my mom was the head deaconess. My dad did lay pastoring too. He'd go to other churches and preach. My parents were always ministering and at an early age they got me involved. I would sing every weekend basically because my church would just say, 'Okay it's time for special music. Maria, why don't you come up here and do it?' And I'd just be like, 'Oh my goodness!' I started preparing because I knew they were gonna call me up!"

I reflect that it must have been good training to have done it from such a young age. Did that mean that you got rid of any nervousness about being in public? "I think I still get butterflies," she says. "It's crazy because I still get butterflies and I think that just means that I love it. Right before I get on the stage, but once I'm on it I'm fine. I think the only thing that makes me nervous is that I feel like at that time I'm representing God, and I always try to make sure that I'm using the platform he gives me for the right purpose and saying the right things." 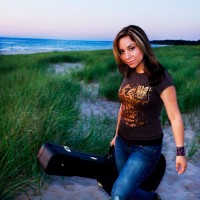 I ask her to describe how she became a Christian. "My parents were doing revival meetings, evangelistic meetings. We had a very diverse community in Houston. There was a very high homosexuality rate there and they were ministering to them as well as many other people. I attended the meetings, by default, because my parents were both there!" she laughs. "I just sat through all the meetings and I'd be drawing but I would be listening to what my parents were saying. And at the end my dad gave a call for baptism and everybody was getting baptised. I remember riding in the car on the way home and I just said, 'Daddy can I get baptised too?' And he replied, 'Of course!' I was a rotten little kid. My dad said when I gave my heart to God it just really changed me. I was a great teenager!"

One of the very special songs on her album is "Inside" and Maria explains, "It was written for one of my Basement kids. I used to have a public high school ministry that I started in Michigan. One of my 17-year-old girls in my accountability group, she had written this MySpace blog and I read it and it was entitled Something Is Missing. Basically she talked about how she had done all these things with a boy because she wanted him to love her. After reading it, it just broke my heart because it's like, you KNOW it's missing. I knew it was missing in her life. I just, instead of preaching a sermon to her and telling her what I thought she should have done, I decided to write a song and show her that there is someone who sees everything, to the core of who you are. How dirty we are, how shameful we are, and he loves us with an amazing love that will never leave. So that's what that song is about."

Maria explains how she writes songs: "I'm a random writer. It always happens at the most inopportune time! Like I'll be in my car, with no paper, or I'll be in the shower. A lot of my songs were written in the shower - half of 'Here With Me'. No. I don't ever think I need to write a song today! It just comes. And I never finish a whole song. So I'll do part of it and then later it'll come a couple of weeks later until it's done."

So what does she hope that people will get from the songs she's recorded? "From my experiences with God and conversations with him, I hope that they just get more connected to God and grow in him, and realise the power that is there and available for them in their lives."

I think it is wonderful the way Maria works with our youth! She takes what God has given her, and uses it to help others. Reading about Maria makes it possible to see an inner peace and beauty that can only come from a close, personal relationship with God. Her music has touched me in such an amazing way. It speaks to your heart! God has truly blessed her in this ministry. Way to go, Maria!!

Awesome Maria.... Your are an amazing artist and i loved reading abotu how you actually got around to becoming a perfessional singer.

I just hope thats the kind of plan god has for me for what i want to do. I woudl also love to go into singing or journalsim. But thats nto what im doign right now.

Now i se through your experience that amybe he just wnats em to do what im doign now and then maybe he will brign me into either singin or journalism. Mayeb id i do go into journalism i will have the honor of interviewing you one day.

that would be awesome. Also i love all fo your songs. They have all helped me in one way or another. Your amazing.

Maria is my seventh grade teacher in Yap. She was one of the person who taught me how to speak English. Maria is awesome and cool. I will never forget her. She is someone so special to me.

I am so thankful that Maria is doing this because I know that there are many teens out there who does not know Christ and through her songs they will come to him. And that is the most awesome thing about Maria. Her songs are so awesome. I love all her songs, especially "So in Love." I am going to treasure this CD forever. Maria, I love you and I am so happy that you are part of my life. You take care out there.