Marian Anderson: From the old spirituals to arias and lieder 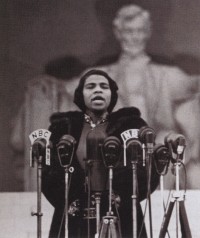 It was Easter Sunday in 1939. There before Washington DC's famed Lincoln Memorial a vast throng of 75,000 people stood entranced as the elegantly dressed black woman ended her recital with the spiritual "My Soul Is Anchored In The Lord". The singer's rich, vibrant contralto poured heavenward and at the completion of the song there was a deafening thunder of clapping, shouting, cheering and stomping. After such a response the singer Marian Anderson had little option but to perform another song. Again it came not from the classical repertoire for which she was now famed, but from the slavery origins of the African American church, "Nobody Knows The Trouble I've Seen".

Marian Anderson had certainly seen her share of trouble leading up to her triumphant Washington concert. The epoch making event, now noted by historians as hugely important in the growing God Rights Movement, had been birthed in "trouble", specifically the racism which still had a powerful grip on America.

In January 1939 in response to an invitation by Howard University to play in Washington DC, Marian's manager Sol Hurok had sought to book Constitution Hall, which with a nearly 4,000 capacity and home to the Washington Opera Company and the National Symphony Orchestra seemed perfect for a singer who, against all the odds, had risen to international classical music popularity. But the auditorium was owned by the Daughters Of The American Revolution (DAR), a hugely influential patriotic society. DAR had banned all African American performers from the venue and refused to accept Marian's booking. News of DAR's shabby actions reached the White House where the president's wife, Eleanor Roosevelt, took action. As a direct descendent of a Revolutionary War veteran, Mrs Roosevelt was a member of DAR. America's first lady wrote to the DAR president resigning from the organization and announcing her decision in her nationally syndicated newspaper column. Immediately newspapers across the US took up the issue and with media interest reaching fever pitch Walker White of the NAACP (National Association For The Advancement Of Colored People) suggested the concert be held on the steps of the Lincoln Memorial. Secretary of The Interior and President Roosevelt both approved the plan, and so a concert took place which was later to be referred to as "America's first civil rights rally."

Marian was born on 27th February 1897 in South Philadelphia to John and Anna Anderson. On Sundays Marian's father served as head usher at Union Baptist Church, one of Philadelphia's oldest and most well known African American churches. While Marian and her sisters joined their father, Anna - a devout Methodist - attended another church nearby. It was at Union Baptist that Marian first demonstrated her incredible musical talents and extraordinary abilities as a singer. In South Philadelphia's larger African American churches, such talent was especially encouraged and appreciated, and Union Baptist was no exception.

Alexander Robinson, Union Baptist's junior choir director, is credited as being the first professional musician to appreciate Marian's exceptional talents. In addition to his role at Union Baptist, Robinson was also a director of the Arion Glee Club, one of the most prominent African American choral groups in Philadelphia. When performing with the junior choir, Marian was most comfortable singing as a contralto (the lowest female singing voice), but she was also able to sing parts in soprano, alto, tenor, and even bass - a feat that was highly unusual for someone her age. In addition, her vocal range extended across nearly three octaves.

When Marian was 12, her father was accidentally struck on the head while at work at the Reading Terminal, just a few weeks before Christmas of 1909. He died of heart failure a month later at the young age of 34. Marian and her family moved into the home of her father's parents, Grandpa Benjamin and Grandma Isabella Anderson. Her grandfather had been born a slave and had experienced emancipation in the 1860s. He was the first of the Anderson family to settle in South Philadelphia and when Marian moved into his home the two became very close. Sadly he died only about a year after the family moved in. 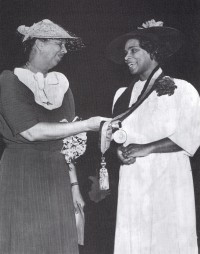 Throughout her teenage years, Marian remained active in her church's musical activities, now heavily involved in the adult choir. She attended Stanton Grammar School, graduating from there in the summer of 1912. Her family, however, could not afford to send her to high school, nor could they pay for any music lessons. Undaunted, Marian continued to perform wherever she could and learn from anyone who was willing to teach her. She joined the Baptists' Young People's Union and the Camp Fire Girls which provided her with some limited musical opportunities. Eventually the directors of the People's Chorus and the pastor of her church, Reverend Wesley Parks, along with other leaders of the black community, banded together to help out Marian. They raised the money she needed to get singing lessons with Mary S Patterson and to attend South Philadelphia High School, from which she graduated in 1921.

After high school, Marian applied to an all-white music school, the Philadelphia Music Academy (now University Of The Arts), but was turned away because she was black. The woman working the admissions counter replied, "We don't take coloured," when Marian tried to apply. Undaunted, Anderson pursued singing lessons privately with Giuseppe Boghetti and Agnes Reifsnyder in her native city through the continued support of the Philadelphia black community. As Marian's reputation continued to grow, more and more opportunities arose for her. Not long after beginning her studies with Boghetti, she was approached by Joseph Pasternak.

Pasternak was the conductor of Philadelphia's Philharmonic Society, a group of highly talented amateur and professional musicians, many of whom also appeared with the illustrious Philadelphia Orchestra. He spoke to Marian about preserving her moving renditions of well known African American spirituals for a larger audience. Pasternak was curious whether or not Marian was capable of producing the same depth of feeling throughout the repeated "takes" necessary for a phonographic recording. After hearing her perform on several occasions, Pasternak was convinced Marian could do it and put her in contact with representatives from the Victor Talking Machine Company, a recording company that produced records. Marian signed a contract and, beginning in 1923, became the first African American concert performer to record spirituals for a major US recording company. Her first recordings were "Deep River" and "I Am So Glad".

Later that year, Pasternak asked Marian to appear as a soloist at the Philharmonic Society's Academy of Music. Although many well known performers had appeared there, the Philharmonic Society also promoted the musical careers of upcoming young Philadelphians. Marian was the first African American soloist ever invited and on 23rd December she performed in front of an audience of three thousand guests. In 1928, she sang for the first time at Carnegie Hall.

Despite her many concerts throughout the United States, Marian felt she had reached a crossroads. Her lack of foreign-language study and the ability to truly appreciate and understand the meaning of the words she was singing, particularly those of German lieder - or soulful songs - were stumbling blocks to her career. More than one reviewer, while praising the strength and beauty of Marian's voice, had commented on her lack of depth when singing in another language. Marian began to think seriously about travelling to Europe to study.

Marian now had enough money in savings to support herself for a few months without performing. She made the decision to travel to Europe to study. "I was going stale," she later wrote in her autobiography. "Progress was at a standstill."
In October of 1927, Marian sailed for England on the SS Ile de France. Arrangements were made for her to study with Raimund von Zur MÃ¼hlen, a prominent instructor in German lieder. 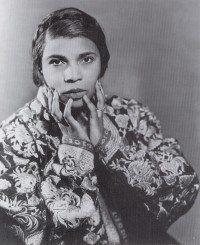 A concert at London's Wigmore Hall led to several other bookings, among them Marian's first appearance at London's world famous "Proms" (the Promenade concert series). Critics, one biographer noted, praised her performance "without reservation." Offers came in from several British recording companies and Marian was approached about giving a recital to be broadcast on the BBC. A photo of Marian following her Royal Albert Hall appearance was published in London's Daily Mail.

At nearly six feet in height, Marian was tall, slim and quite beautiful. It was not uncommon for Europeans to stare at her as she walked down the street. In the summer of 1930 she went to Scandinavia where she met the Finnish pianist Kosti Vehanen who became her regular accompanist and her vocal coach for many years. She also met Jean Sibelius through Vehanen after he had heard her in a concert in Helsinki. Moved by her performance, Sibelius invited them to his home and asked his wife to bring champagne in place of the traditional coffee. Sibelius commented on her performance that he felt she had been able to penetrate the Nordic soul. The two struck up an immediate friendship which further blossomed into a professional partnership, and for many years Sibelius altered and composed songs for Anderson to perform. He notably made a new arrangement of the song "Solitude" and dedicated it to Anderson in 1939. Originally "The Jewish Girl's Song" from his 1906 incidental music to 'Belshazzar's Feast', it later became the "Solitude" section of the orchestral suite derived from the incidental music.

And still Marian rremains in my heart. She had the most beautiful voice I have ever heard'''

I am desperately trying to find recordings of Marion Anderson. Like Toscannini I think her voice is one in a hundred (or more) years. When I first heard her voice I was bedazzled- it was SO beautiful. I and heard Marion. Her choice of songs set my heart on fire, yet fill my eyes with tears-even now as I write. She will live forever in my heart.
I must add, I really appreciated the finding and reading of your arfticle. I shall keep that too!