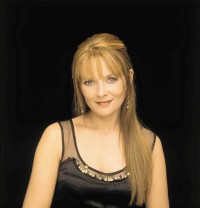 The career of the popular Irish country singer has for years been closely linked with that of another best selling artist, Daniel O'Donnell. Regular touring and recording with Daniel has given Mary a platform to find her own fan base and her stream of albums on Rosette Records have been steady sellers. Last year though Mary surprised her fans with the release of 'Voice Of An Angel'. Not only was the album full of hymns and inspirational songs but it encased Mary's rich soprano in symphonic accompaniments that few devotees of her MOR country output could have expected. May came to the Cross Rhythms studio to talk about her music and her Catholic faith.

Tony: Your latest album 'Voice Of An Angel' will be a bit of a surprise to some of your fans, won't it?

Mary: It probably will because it's totally different from any of the previous ones. The previous albums were mainly country, easy listening and a bit bluesy, some of them a little Celtic. This one is inspirational and I have to say it's a dream come true for me to record this album. I've wanted so long to do an album of this nature. The first place I sang was in church as a child, with the school choir. Then I went on to Secondary school and got friendly with the choirmaster there and he invited me to sing in the school choir there. At Christmas time we used to put on big carol services, I'd sing 'Holy Night' - I still do that at home every year on Christmas Eve for mass. I've just always sung in church. After schooldays myself and the same fellow, he played piano and keyboards and we used to go round and sing at weddings. We did that for a number of years. I suppose he got me into that kind of music. He was going on to be a priest himself and he was very involved with that type of music and what song was appropriate for what occasion. For example what song to sing at what part of the mass, what song was most appropriate. He knew a whole lot and I got a love of music from him. He taught me a lot of great songs like 'Ave Maria' and he taught me the Latin because going on to the priesthood he could speak it properly. I never did it at school. So I did the 'Panis Angelicus' - I learned that from him as well, he taught me the right pronunciation. So, the album is a life-long dream achieved!

Tony: The Church has almost been like a training school for singers down the centuries. Yet since the development of popular music, particularly '50s, '60s, '70s, we often saw singers who had a church background, as they got into show business - touring, money, girls, booze, drugs sometimes - would lose their faith.

Mary: You get caught up in this mad world really, and all that goes with it and you think everything's going well and you forget about your relationship to God for a while because you think you don't need it. Then things take a turn. I think in this life you can't say it's Heaven on earth because there's no such thing. If there was, there wouldn't be a Heaven. Everyone gets a small amount of happiness and then you get something to knock you down. No one is happy all the time. That's life. So, as you say, I think you may have a great time then something goes wrong - maybe somebody who belongs to you dies, maybe you get a serious illness - then you turn back to religion, and back to what you really believe and start thinking about your life. And you go back to music as well that would inspire you to live maybe life better.

Tony: So the fact is that the majority of singers who started out in the Church, even though they may have had a long wobble in the middle, and everybody from U2 to Tom Jones would say that, eventually they will return to the faith. It's hard to shake it off when you know Jesus is the Lord of all.

Mary: Deep inside you really do believe and sometimes you get in with a crowd and it's not the in thing to do, to admit you believe in something.

Tony: That is the difficulty, isn't it? In this company, we do a lot of work with young people and what we have to recognise is that Christian faith isn't considered cool.

Mary: No, it's not. Particularly young people don't want to admit it. Even people I come across in the business they just go: this is rock and roll, this is what we do. This probably sounds ridiculous; I always carry holy water with me. Always have done. When I was singing in talent competitions long before I met Daniel O'Donnell, or even heard of him, a friend of mine used to come along with me and she had a little tiny statue about two inches high of St Martin and she used to bless me with him before I went on stage. Every night she did this and I always ended up winning these competitions. The last competition I won she gave me the little statue and she said I think you deserve this more than me because he's worked with you. I said thank you and I still have him and he comes everywhere with me; him and the holy water. I bless myself with both before I go on stage and when I come off. You have to have something to believe in and if I didn't have him there I would feel there is something missing. That's the truth.

Mary: In Ireland at home we were brought up to go to mass every Sunday. It's now Saturday night you go - you have a choice. It's been changed. But obviously when we're touring so much it's not easy to do that. It's impossible in a lot of cases because our shows are at 7.30 and then you just can't get up early the next morning because you'll be travelling on somewhere and you're exhausted and if you get up you've no voice for your show which is what your livelihood is about. But I don't think personally that you have to actually go to church to pray - you can pray anywhere. You can pray in your bedroom, you can pray here in this studio.

Tony: Let's talk a little bit about music. You started off as a teenager doing rock and roll, didn't you?

Mary: I started off with my father and his band singing mainly country songs, easy listening. Then after schooldays I did the talent competition thing and got with a band called Jukebox who were starting off and they were a rock and roll band in Ireland. We did some of the modern chart songs as well just for good measure. I did that for a couple of years and I loved it. It was a different feel for me from the country. I used to get dressed differently, I used to wear leather trousers and waistcoats and had my hair chopped really short and peroxide blonde. We did the old Chuck Berry songs. I had a great time and then the scene in Ireland got really bad for live music and I went back to shorthand and typing for a while. That was in the '80s.

Tony: Why did the live music scene go bad in Ireland? Was it because of discos?

We just returned from Branson Mo. we thoroughly enjoyed your Christmas show....beautiful voices, and beautiful message. Thank you.

Has marry duff remarried, she is such a beautiful woman, she needs some one to love her ❤️

Hi Mary You have new song called Snowbird and Down by the Twist and Shout That Wonderful.

Mary I found your song call goin' gone on youtube.

Hi Mary.
In 29 years you sing one bird on a wing that wonderful. God Bless You.

My sisters and I did go to see you and Daniel O'Donnell,enjoyed the show very much,enjoyed the song you sang " Working Man".Listing to you on youtube ,a great song you do is "Walking on The Moon". Had our picture taken with both of you.

The Best to you both,from Calgary Alta

I listen to you a lot on youtube and makes good listing.

My 5 sisters and I have bought tickets to see Daniel O'Donnell in Calgary,I hope you will be there,I really enjoy your singing.This will be the fourth time we have seen you and Daniel

h,i mary heard you version of the cliffs of doneen recently on some radio station iv never heard it sung better spellbinding