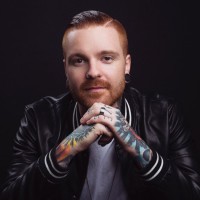 As any fan who likes their rock hard and heavy will tell you one of the biggest and most exciting acts around are the Dallas-based metalcore group Memphis May Fire. Their albums 'Challenger' (2012), 'Unconditional' (2014) and 'This Light I Hold' (2016) have all been rapturously received by their legion of fans and their main songwriter and vocalist Matty Mullins has been much admired for his musical ability but sometimes vilified for his outspoken Christian views. Now with the release of his second solo album Matty is likely to find acceptance among some sections of Christian media but criticism from those hardcore enthusiasts of metal who have found his new solo project 'Unstoppable' to be a pop rock set clearly targeted at US Christian radio. Cross Rhythms spoke to the Memphis May Fire frontman about his unexpected side project.

Tony: So why a Christian music album? On the album you're collaborating with Matthew West whose music is miles away from metal.

Matty: I grew up on Christian music - MercyMe, Audio Adrenaline, Jars Of Clay, dc Talk. In high school I got into heavy metal because of Tooth & Nail Records; there was starting to be a new wave of Christian metal. I started to pursue that and it went really well: God opened a lot of doors, and I still play in that band fulltime. Memphis May Fire are going to be over in the UK at the end of May for the Slam Dunk festival. My love for Christian music has never gone away; it's been such a staple in my life. When I'm home from tour I don't listen to metal, I listen to Christian music, and Matthew West's one of my favourite artists. Having the opportunity to write with him was a huge blessing. God continuously tells me this is where he wants me. He wants me to be pursuing this project as well as the band. Matthew is hard to get in a room with, because he's so busy - and he's such a talented writer - so for me to have my first co-write ever be with him was astonishing.

Tony: You've written on 'Unstoppable' with Jordan Feliz, who originally came from the metalcore scene. Did having a similar musical background help you write together?

Matty: Not necessarily to write together - I don't think the metalcore background aids to this project - but it was really cool how it worked out. I saw him perform "The River" at an award show. I sent him a tweet - I didn't know him at the time - I said, 'Hey, Jordan, you did a great job.' He tweeted back to me, 'That's a great honour, coming from you: I'm a fan of the band.' It was crazy we connected over social media. I asked if he'd like to be a guest vocalist on the album, and he said yes immediately. That was a really big blessing, an amazing door God opened for the record.

Tony: I know a mainstream musician who was told by his record company that eclecticism doesn't sell, and he needed to settle on a genre if he wanted to find a fanbase. You seem to be flying in the face of that view.

Matty: I don't expect Memphis May Fire's fanbase to follow me into Christian music. It does bless a lot of people, and there's a large group of my following that supports both projects, but it's not something that I expect. More than anything I want to write music that encourages people that do love Christian music. From an outsider's perspective, it looks strange to be existing in both worlds at the same time. It's a miracle. God uses me to be a light in dark places, in metal; and he uses me to encourage believers and non-believers alike through Christian music. It's a real blessing that the path has been nothing short of amazing thus far.

Tony: I know you are hugely busy. Do you get involved with Beneath The Skin?

Matty: That's my wife's non-profit. She started to serve young adults that were struggling with anxiety and depression. Beneath The Skin is a peer-to-peer mentoring programme, and she pairs up people that are struggling with people that have already been through those seasons and overcome them. They meet an hour a week, four times a month. They've seen some incredible success taking people away from their phones and social media, putting them into real one-on-one human interactions - how God intended it. You see relationships blossom. People's negative emotions fall to the wayside because they have someone to share it with. I believe God created us to be in community. The Bible says, 'Weep with those who weep.' It's totally her thing that she started, but I am a big supporter of it.

Tony: Your first solo album had a sleeve that suggested metal.

Matty: It's true. I've got tattoos all over my hands, all over my body. The album cover was saying, 'This is me. I'm here. Check out the music and see if you like it.' The way that I look doesn't at all affect the style of music. 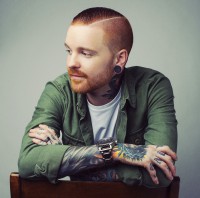 Tony: Are any of the other members of Memphis May Fire Christians?

Matty: One of the other guys is. He's a fairly new believer. It's tough in that realm. They see how much flack I get for being open about my faith, and it can be discouraging for me. If the Holy Spirit uses me to influence them to follow Jesus, that's amazing. I really do hope that happens. But it might take something totally different; it might take somebody from outside of our camp. I hope so dearly that all of them decide to follow Jesus. At this point it's not that way, but they are not at all disrespectful of my faith: they're supportive of it, they do stand behind me and the words that I choose to share with people. It's as healthy as it can be.

Tony: Surely there have been band members or industry people who have said, 'Don't go on about the Lord so much.'