Being told about Jesus by his record producer made Marcus Pagnum, better known as MAX, give up music for six months. Now he records self-penned albums, gigs with Bliss and moonlights with a Beatles look-alike band! Ian Boughton reports. 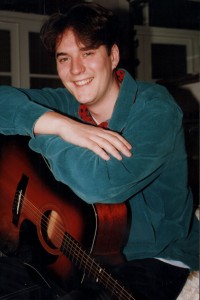 Which is hardest - to play CCM to audiences who know the answer and are on your side to start with, or to play it to secular audiences? "No problem about it," says singer/songwriter Max, from Cheadle. He's session guitarist with Manchester's World Wide Message Tribe, plays a part in the northern Message To Schools project and takes his own band Bliss on the road to non-church events.

Is that the hard way of doing it? Is this more laying-yourself-on-the-line than going out and playing a Christian festival audience that doesn't really have to be won over? "I don't have a problem with this at all. A lot of what I play is in front of the 'unchurched' and a lot of my themes are about change, which is something I find important, because it was very meaningful for me - but I don't treat it as a mega-evening of 'this is the Gospel'.

"Most of the shows I play are for unchurched people, but seem to be organised by the church; we had a completely secular audience of 200 in Northwich the other night and I haven't the faintest idea who got them there! But I have never experienced any anti-Christian thugs in front of the stage saying they'll beat me up because of my message. Most people are sympathetic to the message so long as they enjoy the music.

"And I don't have any trouble with the message," continues Max. "I can relate to teenagers not knowing what they're living for, because I've been there, too. So if this is the hard way of doing it then I have to say I enjoy doing it the hard way!"

Manchester is, of course, big in sanctified dance evangelism and Max plays guitar and occasionally gigs with the World Wide Message Tribe, a band which came from an imaginative drive to take Christian music into local schools. It was that project which brought Max out of the curious semi-retirement that struck him after he first met Jesus.

"I became a Christian five years ago, from a completely unchurched background. Music is what I lived for and it was Zarc, the Tribe's producer, who played a large part in my making a commitment: I used to keep him company at his job in a filling station at night and we'd talk until four in the morning, then I'd go home and go to work. I must have been mad!

"Looking back, Zarc was dragging me towards it, but at the time I was oblivious to what was happening. Then there was one very big step in coming to terms with God being real and I remember at one stage thinking: 'now I really do believe -great, I'm a Christian!'

"It stresses somewhere in a book, either in Why Jesus? or Journey Into Life, that you say the prayer and then tell people; so I went through the motions of saying the prayer, but I still didn't know where Jesus came into it all, so for six months I didn't write a song or play a thing, because I was getting to know God: then, reading the book of Mark, it all clicked!

"Now, I don't read a lot of books, so having a Bible thrust at me was rather an event - but it says a lot for the power of Scripture that, even though I'm not a book-reader, the Bible had God speak to me."

And after six months, the songs came back - but the return to music was forced on him. "It turned out that Mark from the Tribe was just getting his Message To Schools idea off the ground and asked if I would play a support spot, just three songs. So I had to write them! For me, this was writing Christian songs for the first time ever. Before that, my songs had been the usual meaningless drivel, but this gave me direction.

"Mark's vision was quite clear from day one: go into Manchester schools and play lessons and lunchtime shows. I'm very fortunate to have seen it right from the beginning, even if my role has been just an occasional support singer."

What was the reaction from schools? "From what I can gather, some headmasters warned them not to be too religious or forceful, but most were just happy to let them get on with it. There's one particularly rough school which is notorious for fights and during the whole week the Tribe was there, there wasn't a single fight!

"They've thought of expanding it (Message To Schools) around the country, but they felt there was too much still to do in Manchester, so the real reason for the Tribe doing festivals has been to encourage other people to do the same thing."

It encouraged Max himself. "My own band Bliss was formed with a message in mind: to be involved in youth events that are evangelistic. We play random youth events all over the country - we're a bit of a Pot Noodle as bands go, because as we're backing tracks with guitars over the top, we can be ready in no time at all! We're a jazz-funk trio, we're way up to date, but so far we are an unrecorded trio."