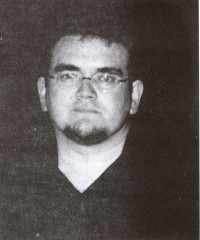 The girl in the song is in a bad way, so she turns to the Church for help. And, in nine Christian songs out of 10, this would lead to a happy ending. Not in "Jenny's Song", a track from Michael Cameron And Frontline. In this story, the Church does not help, and the girl is left completely alone and friendless. It's an uncomfortable thing to hear, but Michael believes that a committed Christian songwriter can't gloss over the awkward situations.

It is an attitude that came from an awkward situation of his own, an illness that cost him his job. "At the time I developed ME, I had been out for seven nights in a row to a music conference at my church. I came home elated, and the next morning I couldn't move - I thought I had 'flu, so 1 spent a couple of days in bed, then went to work and had to be brought home again. ME is a viral thing which just weakens your whole system. I had been a very active person up to then. I had supported everything I could at my church, and I thought my church would be supportive of me...and on the first day I was laid off, they were. Then it was as if someone had just rubbed our names out of the register.

Being let down so badly by a local church hugely affected the Belfast-based singer/songwriter. "Hand on heart, I did go through a period of bitterness. But I also realised that I myself may have been neglectful of people in need, so I concocted the story of Jenny, somebody in a bad way who saw a sign about a friendly church, but just found that the people inside were all bound up in their own cliques."

What was the reaction at the church that had let him down? "Well, I never performed it in that church, because by the time the album came out, we had moved to another one. But a lot of people heard it and read between the lines."

Michael doesn't regret the song at all. "My heart is now in cutting through the formality," said Michael. "Previously, I might have played somewhere and thought that perhaps I'd better not offend people by singing certain songs; now I do, and I find that people come up and say that they've been through the kind of thing I've been singing about. It makes me realise that society has changed and that the Church should react to it."

The song appears on Frontline's 1997 album 'Hard On Your Heels' (now available in the UK through New Dawn Management) and is typical of the band's challenging attitude. "Our role is to challenge Christians not to just go along with it all for the ride," continued Michael. "We all talk about how wonderful God is, and how well he has everything organised and that's easy to do from a secure background. Suddenly I was faced with everything I was singing about being tested, and I got very confused about my whole religious scenario. Looking back, I realise I had been singing songs telling people how to cope with things that I hadn't had to cope with myself. I think this was God saying, 'Ok, son, let's see how you handle it!'

"So a lot of what I write now is written with the benefit of experience, and my songs on that album reflect the struggle of facing up to the fact that life is not all a happy 'isn't it all wonderful' singalong. We decided that our music should leave people with something to think about, which has annoyed the ones who just come to church for a nice time, not to think! For myself, it has made me a lot more aware of other people's feelings."

There is another surprise on the album. "If I Said" is pure blues, a style that thanks to guys like Glenn Kaiser and Darrell Mansfield is now returning to CCM. Said Michael, "I was thinking one night about those situations in which you've been praying for a while when suddenly reality comes upon you and you realise that you've actually stopped praying and started thinking about what's going to be on Match Of The Day... I thought, 'What if an audible voice came back to you to get you back to the subject, then what would you do?'

"It became blues because we just jammed it that way, and for a couple of years we finished gigs with it and it always went down well, even though a lot of people still believe here that blues is attached to the Devil. You see, over here you have two camps in religious music. You have those who challenge and those who just sing nice songs; this means some people don't like some of the things we do, but we just say 'Bless you' and move on!"

The "over here" is in Belfast, where the prospect of religion in song may seem tricky. Do Michael and his songwriting partners find that a Christian band in a divided city has to tread carefully? "I could say in return that the image we get of England is of riots at every football match, and if I asked you if every street in England had a Fred West living in it, you wouldn't like it!" retorted Michael without any malice. "The reality is that this is a beautiful country with a lot of very decent people in it, and the image of a conflict situation obscures the masses of ordinary people who are getting on with their lives.

"We're a Protestant band from a Protestant area, but we play Catholic areas and the occasional priest walking in to one of our gigs has been made very welcome; we do cross-community events. Northern Ireland is a place with a lot of challenges attached to it. There are people who call themselves religious and who say a lot of 'God' things, without putting any love into it and there are others who pray for God to come and heal our land, which gives me this vision of God looking down at us and asking 'What do you think I put you there for?' I think of Christians as having responsibilities to get involved, not sitting back and watching. Let's own up to the difficulties, talk to each other, strengthen each other, and help each other move on."

With a new album planned for 1998, Michael Cameron also has plans to play in England. He will be here in February for a one-off in London beside Carolyn Stillwell and Loose Goose, his stablemates in the New Dawn organisation, but has ambitions for a more constructive cooperation, which would see him in England more often.

"I think there's room for some networking - we would set up dates for Christian musicians over here if they would help us with dates in England. There's too much rivalry and judgment in contemporary Christian music. It doesn't really matter if we dig each other's music or not, let's start encouraging and helping each other!"

Even back then you were forward thinking and ahead of your time...refreshing. I really enjoyed reading your thoughts/opinions and about your music. You need to do more!!! X