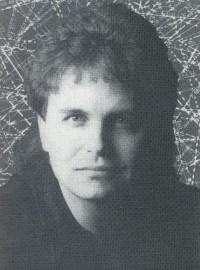 Michael Gleason may be an unfamiliar name, but it's likely you have heard him. Gleason was part of the touring Kansas band in '83, and was with Kansas' Dave Hope and Kerry Livgren in the band AD until its recent break-up. Gleason's new album 'Children Of Choices' is, in radio parlance, AOR-edged CHR (or, in plain English, rock that has a melody you can sing with). The best description is that it's sort of like Kansas through a modern pop filter. The touches of Kansas, and AD are everywhere, but usually they're subtle, lurking in the mix. I'm originally from the state of Kansas and I grew up around Wichita," explains Michael, "I'm considerably younger than Kerry and Dave. When I was in high school and early college I was an admirer of the music that was coming out of the band. I did some multi-track studio work that I sent to a post office box, which was on Kerry's first solo album, 'Seeds Of Change'. Lo and behold, a couple of months later, he called me back. He apparently liked what he heard, and asked me if I could join him on his next solo album."

"One thing led to another, and I ended up going on the road with Kansas, because they had a slot to fill for someone who could play and sing. I was on the road with them in '83, and then the AD records. From a pragmatic standpoint, I got a big jumping-off point from being able to work with Kerry in the studio; I owe him a great bit." "I performed for years in nightclubs before I went on tour with Kansas," says Gleason, "but obviously, it's a whole different ball game when you're playing arena rock." Not only are the audiences different, but Gleason was faced with coming in as the new guy in an established team. "From a spiritual standpoint, I guess the biggest thing was just to learn how to live with other people." Even though he was exposed to the supposed allure of the big-time rock scene for a while, don't look for one of those 'been through hell and back' stories from Gleason. "I had the very good fortune of being raised in a home with two parents who were strong committed believers. So whether Jesus Christ was the truth or was real was never really a question. It was in my earliest upbringing. It was a natural part of me as a child. Of course, there came that moment of truth later on as an adolescent where I internalised that and made it my own. I'm committed to it, and have seen it borne out in the lives of people around me."

It seems to be a natural part of his music, too. He tries not to lapse into the kind of language that waves a red flag in front of the general-audience bull, yet the point still comes through. Some people might say he's selling a line. So what does Gleason say to that? "I think everybody's selling a line, unless you consider your life to be absolutely meaningless. It doesn't matter who you are. It appears to me that the way artists live their lives comes through in their music in some way." "I think my view is viable because what I'm trying to say happens to be related to the truth I've seen borne out in my life. I think that a lot of this record is issue-orientated, which seems to be very much in vogue; we almost have a 60s revisited these days. There is a lot of issue-commentary on this record, but it is written from a very specific worldview - a Christian worldview. I believe in an Absolute, and I believe that it is found in Christianity. It's the most valuable line to be sold, and it's worth buying."

Gleason takes aim at the a la carte approach to life in the title track "Children Of Choices," by asking what (or better, who) it is that we are seeking to make ourselves into. "We are all products of a collective set of choices that we've made all our lives," as Gleason sees it. "Every day is just adding to the product, and every choice we make is pushing us in one direction or another. Being a child of choices means that I am the product of the decisions I have made. There's a direction that's implied here. But directions can be changed."

In the song "True To Myself," Gleason rebels against the attempts to bully or goad him into going a different direction.

"There are a lot of hidden agenda things in that particular tune. It has some very personal experience behind it. There's a certain amount of angry young man in that song. People, and particularly artists, will find that you have people trying to constantly turn you one direction or another, to lead you down this path or that path. Or, 'Why don't you treat your writing this way or that way?' It doesn't matter who you are, you always have somebody pulling at you. But I hope that the song reflects a 'justified rebellion,' if there is such a thing, against being tossed about to and fro. The idea that you need to follow your convictions and to stick to them."

There are other pressures on him, too, such as the pressure to follow Christian music formulas. A good artist sometimes wonders about the value of making music that grows from faith in Christ, and whether there is any power in song - especially when it aims to be heard by Christians and non-Christians alike. Awareness makes for a better understanding of what one is doing.

"I am under no illusion that music is what changes people's hearts and saves souls. I think it's a tool. The work of changing people is entirely God's and God's alone. He may do that through a number of different vehicles; I don't feel my responsibility, as a musician is to do something so powerful that it changes people. My responsibility is to be a good steward of the abilities that God has given to me, be a good steward for the ideas that I've been given, and put them out there. The Lord may choose to use them in a powerful way, but the power is His. There's a lot of emotional pull that can be accomplished in the music, but I don't think that it's an end it itself."

Gleason now spends much time producing recorded music for local artists who specialize in small-scale, personal ministry. He also does music for commercials and promotional films. No longer touring, he now has time to spend with his wife and five children, ranging in age from 10 to two. It's also a more peaceable setting for enriching one's spiritual practices. He seems quite at peace with being a child not only of his choices, but also of the One he chose to love.

The opinions expressed in this article are not necessarily those held by Cross Rhythms. Any expressed views were accurate at the time of publishing but may or may not reflect the views of the individuals concerned at a later date.
About Bob Longman
Bob Longman Jr is an American journalist who has contributed to many publications.

To whom it may concern?
l am looking for the CD of Voices from the old world, as an instrumental cd it so encouraging & a pleasure to listen to. l am a kansas fan & had the pleasure of meeting the band in Topeka kansas & Kerry Livgren after the show a very generous & caring man. l have the entire AD collection which lead me hear Michael Gleasons solo recordings he is a very blessed musician with so much God given ability a pure joy to listen to his music God bless Bruce from Australia.

I receive my daily bread
My soul is fed
I gotta place to lay this big olâ head!
I was on the edge also dead
But Iâm alive and well instead
Thank God for Jis amazing grace
I need it in this place to fill an empty space
I run this race just to see Him face to face
He makes blind men see
I think it was me
Who saw nothing but misery in front of me
He opened my eyes to what would set me free
He makes lame men walk
It ainât just talk
He changed my thoughts, forgave my faults
Now Iâm on my feet like I canât be caught
He makes dead men live
To my life He gives what canât be killed
Iâm eternal with the blood he spilled!
Iâm eternal with the blood He spilled!

I was lucky enough to spend a year in Band with Mike when his father was our band teacher. He was a fabulous trumpet player, but I didn't know he sang. I will have to check out that song.

Children of choices is one of my all time favorites. I use it to sound check a system I am using live. This way I can play it before a show and most folks say " who is that!" It opens a door to witness for Christ. Michael has a drop dead great voice and I hope to meet him in glory someday!⏳

Is this the Michael Gleason who did "Lifetimes" on the '87 compilation album "Jazz Flavors Cats IV" from the Atlanta 94Q "Jazz Flavors" radio show? (got to be) I've always loved that piece. This is you too, right?:
http://www.youtube.com/user/KJCMuzique
What album are these two on? Love your harmonies and melodies. Thanks, Chris Turner, christurnermail@msn.com

Wow - Gleason is quite an artist! I still listen to his work from the mid 1980s! Does anyone know where he is these days, or if he is still performing, privately or publicly?

Michael played for North Point Church in Alpharetta for years and can still be seen on Sundays there, although he is not on stage much these days. Great guy.

HELLO EVERYONE, JUST BUY CHILDEN OF CHOICES (PAKADERM1990)FROM MEICHAEL GLEASON FROM EBAY.AUSTRALIA EXPENSIVE BUT I LOVE THIS MUSIC AND MICHAEL GLEASON .WHO CAN HELP ME WITH A DRES OF MICHAEL GLEASON AND A DETAIL CD DISCOGRAPHY PLEASE CAN ANYBODY HLP ME THANK YOU HAVE A GREAT DAY . KIND REGARDS ROBERT .