Michael Kiwanuka: The British Ugandan with an album "among the decade's best"

Tony Cummings reports on the "You Ain't The Problem" radio hitmaker, MICHAEL KIWANUKA 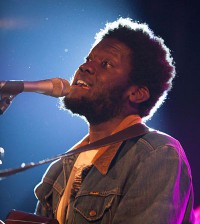 If you're a follower of the soulful end of pop music, you will know the name Michael Kiwanuka. Michael's latest single, "You Ain't The Problem (Claptone Remix)" from his hugely acclaimed 'Kiwanuka' album, has just been added to the Cross Rhythms playlist. Aficionados will have already bought the first two albums by the singer/songwriter from London's Muswell Hill. The son of Ugandan parents who escaped the Idi Amin regime, Michael has established himself as a mainstream soul star having long been acknowledged as an exceptional guitarist, playing sessions with producers Chipmunk and Bashy. His regular appearances on UK TV and tours with Mumford & Sons and Adele have made Michael one of the UK's most praised singer/songwriters.

What has often gone unnoticed or undocumented is Michael's strong Christian faith. He grew up in church - at St James', Muswell Hill - and said that it has had a huge influence on his songwriting. But he was surprised when, early in his career, his record company decided to release "I'm Getting Ready", with its refrain "Oh Lord, I'm getting ready to believe", as a single.

Kiwanuka's church-going influenced his writing "in a huge way", he told Church Times. "Probably 95 per cent. Five per cent is being a musician, and the other 95 per cent is the stuff that you write about, sing about, which is inspired by my upbringing in church. And also what music can do - that emotion." It was 2011 that Michael came to the attention of Communion Records, who released his first two EPs. Also that year, he signed a deal with Polydor and was included in the BBC's Sound of 2012 poll and was named as the winner on 6th January 2012.

His debut full-length album, 'Home Again', was issued in 2012 and went on to make number four in the UK album charts, selling over 70,000 copies. It was four years between the release of 'Home Again' and his big breakthrough release 'Love & Hate', which peaked at number one on the UK album chart. In 2016 he spoke to the Irish Times about the inner turmoil in creating a cutting edge follow-up to his debut.

If the critics praised 'Home Again' and 'Love & Hate', they went absolutely gaga about the 'Kiwanuka' album released on 1st November last year. The Guardian newspaper suggested it was one of the best albums of the decade. They wrote, "Michael Kiwanuka's first two albums established him as a folksy symphonic soul man akin to Bill Withers and Terry Callier, and set the bar pretty high. This one knocks it skyward. Together with producer-to-the-stars Danger Mouse and London hip-hop producer Inflo, the British-Ugandan 32-year-old has broadened his territory to stretch from Donny Hathaway-style melancholy soul through to Rolling Stones-y gospel rock, psychedelic soul and breakbeat. There are strings and harps, samples of civil rights campaigners, Hendrix-type frazzled guitars and Burt Bacharach-type orchestrations. The dreamlike, revelatory quality is reminiscent of Marvin Gaye's 'What's Going On' and Primal Scream's 'Screamadelica'."

When he's not touring, Kiwanuka now attends St Luke's in London. He told Irish Times, "It's a part of me and I put a part of me in all the songs I do. It inspires the lyrics, the sound of the chords and how I live as well." But his faith is also something that he thinks the music industry would prefer him not to talk about. "You get advised not to say anything about it by labels and media people. I don't know why that it is. It's not seen as cool and people want cool. I believe there are a lot of people out there exploring their spirituality, but if you're around record labels and TV shows and magazines, it's different because the people who run those are older and have certain strong feelings about religion. But I think kids and young people out on the street don't think like that. It's a fascinating subject because people don't talk about it."