Michael McMillan: The Scottish songsmith with a heart for the homeless

The latest album by MICHAEL McMILLAN is the latest chapter in the long and colourful life of Glasgow's singer/songwriter. Lins Honeyman finds out more. 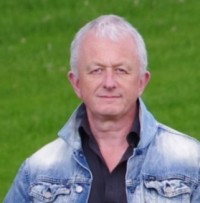 The cover of Michael McMillan's third album 'Meet Me At The Cross' sees the Glasgow-based singer/songwriter standing, guitar by his side, at a remote and dusty crossroads - an image that sums up a musical career and a life that has involved many directional choices over the years. Continuing to ply his own brand of socially aware songs, there is now an air of confidence about Michael's latest release but he would be the first to admit that the road to get where he is today has been a long one.

Originally taking up the bagpipes in his early teens, Michael left school at the age of 16 to play drums with various bands in the burgeoning '70s London music scene before returning to his native Glasgow and appearing with well-known local groups such as the Downtown Flyers and the successful Thin Lizzy tribute band Black Rose. Forced to choose between ever-increasing music commitments and a career in the police force, Michael opted to quit music for a lengthy period before a fortuitous meeting with Scottish harmonica virtuoso Fraser Speirs (Van Morrison, Muddy Waters, Paulo Nutini) and Foundry Music Lab producer and Wet Wet Wet guitarist Graeme Duffin started the musical ball rolling once again.

With Speirs' and Duffin's input, 2007 saw the release of Michael's first solo album 'Cold And Roofless' containing songs dealing with the overall theme of poverty and homelessness with sale proceeds going to the Glasgow-based homeless charity City Mission - an organisation that Michael continues to work for on a voluntary basis. Three years later, Michael issued the follow up 'Faith To Faith' before enlisting the help of multi-instrumentalist Scottish producer Sam Gallagher to produce his latest piece of work.

I catch up with Michael McMillan in the cosy confines of East Kilbride's Hunter House Coffee Shop - an increasingly renowned live music venue set in a 17th century house that Michael himself plans to play at later in the year - to ask him how 'Meet Me At The Cross' came about. "The latest album was God-led," advises Michael. "I'd been going through quite a hard time in life and I went to stay in a cottage that my best man lets me use in the Argyll and Bute village of Tighnabruaich. I went there with no preconceived ideas and basically God and I wrote the songs. I know that sounds cheesy but that's what happened. Most of the songs were written to thank God for being with me and asking him to help me be the man he wants me to be whilst still trying to be accessible to listeners who maybe aren't Christians."

With a sound that reflects Michael's love of American acts like the Eagles, Jackson Browne and Crosby, Stills And Nash, it's clear that working with Scottish producer Sam Gallagher - who impressively takes on all instrumental duties on 'Meet Me At The Cross' - has paid dividends. "Sam is a gentlemen and a pleasure to work with," confirms Michael. "You can go into some studios where the engineers and producers have a bigger ego than the artist and make you feel uncomfortable. Sam on the other hand is so laid back but knows exactly what he's doing and how to get the best out of people. Sam makes you feel at ease and listens to what you're saying and his professional input makes your album better. I gave him the ingredients and he made the cake."

Michael's three albums to date have had an overarching theme of social awareness towards the issues of poverty and homelessness in his native Glasgow whilst maintaining an underlying aspect of faith. "When I became a Christian 10 years ago, I heard about people rushing out to mission fields in the likes of Africa and Asia - as they should - but right in front of our noses there are people who don't have a roof over their heads and children living in poverty in our home streets," advises Michael. "I wanted to do something about that so I volunteered to work for City Mission - a charity based in Glasgow that offers Christian care to the vulnerable and disadvantaged. The song 'The City Mission' on the new album has a line in it that goes 'They didn't fall because of how we stood' which is basically asking if we're doing all we can to help people. Can I stand up on the final day and say I helped that person? I'm not saying I always do - we all fall short - but if you keep focussed on helping people in dire need it's more likely to happen and songwriting is part of that. I couldn't write about the plains of Arizona or even the fishing boats of Peterhead. I don't know anything about these things but I do know about the streets of Glasgow and London because I've lived there. I can only write about what I know."

It appears that an early musical encounter with the late entertainer Frankie Vaughan planted the seed of thought in Michael's mind that that both music and social awareness could be intertwined. "When I was in my early teens, Frankie Vaughan was putting on a benefit concert in Glasgow's Alhambra Theatre - he was in talks with the local Easterhouse gangs to try and end the violence that was going on - and he asked the pipe band I was in to open the show. That was my first real taste of playing to a live audience. At that age, music was a real leveller for me. I was brought up Jewish and, through music, I met other people who didn't care about what religion you were or whether you were fat or thin - you were just accepted."

After leaving school at 16 and taking up the drums, Michael soon had his sights set on bigger things. "I played in a band in Glasgow with a good friend of mine called Brian Robertson," he advises. "Brian famously joined Thin Lizzy and we went down to stay in London and I ended up living in a flat with Police drummer Stewart Copeland and rubbed shoulders with members of bands like T Rex, Free and the Pretty Things. I got involved in a lot of stuff that I shouldn't have - I was an angry young man at the time and did everything to excess and then some. I played in various local London bands and it was a good time for music. Then punk came along and it wasn't for me so I returned to Glasgow and started playing drums in a Thin Lizzy tribute band called Black Rose. The band became quite big and toured a lot but I couldn't maintain it with my day job as a police officer so I had to make the choice to quit music."

After spells of working in the police and the motor trade before settling into his current role as an addictions counsellor, Michael gave his life to Christ in 2004. "I was in a really bad in place at the time," he confesses. "A lot had gone wrong in my life - mostly my own fault - and someone had given me a book called Nobody's Child by John Robinson. Basically, the book was about the author who had been through the prison system and, whilst in prison, gave his life to Jesus. At the end of the book, it gave you a number to phone if you wanted to find out more about Jesus. Now, I was a real cynic at the time but I phoned the number and John himself answered. It turned out that he was an addictions counsellor in prisons like me and we chatted for a bit. He suggested that I attend an Alpha Course so I went along to one at a local church and two of the most patient guys you could ever meet welcomed me and answered every single question I had. Those guys stuck with me and, at the end of it, I was convinced and I gave my life to Jesus. I can't say it's been an easy journey but it's been more than worth the struggle."

Shortly afterwards in 2007, Michael set about recording his first solo album 'Cold And Roofless' to raise funds for City Mission followed by 2010's 'Faith To Faith'. "The first album came about after a meeting with harmonica player Fraser Speirs," Michael explains. "Fraser introduced me to Foundry Music Lab producer Graeme Duffin who went on to produce it and it's gone on to sell reasonably well. After I finished 'Cold And Roofless', I got together with a couple of folk musicians and we did a really nice version of what would become the 'Faith To Faith' album using button boxes, dobro, fiddles and whistles. The reason that version of 'Faith To Faith' didn't see the light of day is that those guys - who weren't believers - felt it was too Christian and asked for the name of the album to be changed. I went away and thought about it and had to say to them that in all conscience I couldn't. They said they respected my decision but felt they couldn't be part of the project anymore and we split on amicable terms. I then went into a studio and re-recorded the whole thing."

With the release of 'Meet Me At The Cross' and the formation of a six piece backing group called the Hope Street Band behind him for upcoming live appearances, Michael is keen to keep any relative success in perspective. "I learnt a valuable lesson with the first album," he admits. "I got a distribution deal for it and the album was in every record store in the country. Initially, I thought it was fantastic but then I realised that nobody knew it was there. Unless you're out touring and promoting the album, there's no point in having your CD sitting unnoticed in an HMV store in Oxford Street."

Determined to keep his feet on the ground, Michael adds in closing, "I need to be guided by God in terms of my music and what to do with it now. I feel the next step is doing a handful of gigs a year and continuing to write songs. I'm more than delighted with the new album though and there's something about being content with where you're at."