Michelle Williams: The Destiny's Child singer sings about the Heart Of The Matter 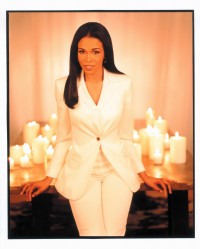 Usually, when a big star of the mainstream records a gospel album the Church - hungry for personalities to give the Christian cause some much needed publicity- reacts with unbridled enthusiasm. The news that Destiny's Child's Michelle Williams was set to release a solo gospel album brought forth a much more muted response. The regular sight of Kelly Rowland, Beyonce Knowles and Michelle Williams cavorting across our TV screens dressed in not very much has caused understandable unease from those asked to embrace Michelle as a sold-out saint. Gospel Today wrote, "Attempting to reconcile the imaging of Destiny's Child with Christian beliefs makes many people uncomfortable. While God judges the heart, man can only judge appearances and actions."

In the same magazine, Michelle responded boldly to the suggestion that Destiny's Child's on-stage outfits were simply too revealing. "Lots of times, as far as the outfits of the group are concerned, I've been kind of covered up. That's been by choice. Even when I was in the Church I hardly ever wore a pair of shorts. In the blazing summer I always wanted to put on some jeans and cover my legs. When I got in the group my manager knew our style was sort of uncomfortable for me. He knows that and he does try to abide by that. I'm still saved and there's nobody in this world who can judge me and tell me anything otherwise."

Michelle is very much a church girl. She grew up in Rockford, Illinois and went to St Paul Church Of God In Christ. Looking back, she appreciates the insistence on the part of her parents to involvement in the Church. "We were in church every Sunday and during the week, 'she remembers'. My Mom would say, 'Go to choir rehearsal. (She went on to direct it) or 'You're going to be on the usher board. You're going to be on the hospitality board."

Michelle's singing aspirations began to take form when, at the age of seven, she delivered her first solo - a rendition of "Blessed Assurance". Inspired by gospel's finest like Yolanda Adams, Kirk Franklin, Commissioned, the Clark Sisters, Hezekiah Walker and Marvin Winans (her all time favourite male singer), Williams became a driving force in two church-based groups: United Harmony and Chosen Expression, but eventually resigned herself to singing as a hobby, reasoning, "Who's going to come to Rockford to see the talent that was there?"

One day the 17 year old sophomore in her second semester in college received a phone call which was to change her life. "A friend of mine who I hadn't talked to in years was playing for Monica (an R&B singer who scored a 1998 hit with "The Boy Is Mine" - a duet with Brandy). He just happened to call out of the blue and was like, 'You know, I'm playing for Monica? So what are you doing?' I told him, 'Nothing. But if Monica needs a background vocal, give me a call!' I was just playing around but he called me a week later and said she was having auditions in Atlanta and to get there. I got there and I auditioned and got the part. I met Destiny's Child when they did a show with us - opening for Monica. I stopped singing with Monica when her tour ended and when Destiny's Child was looking for a new member. My choreographer (who danced for Monica and is now Destiny's Child choreographer) told the girls that he knew of someone who could sing. I went to the audition and sang for the girls and that's how I got in Destiny's Child."

Michelle was once considered "nerdy" by classmates. She has a message for those experiencing trials in trying to "fit in". "Growing up, I experienced a lot of hurts," she recalls. "When you try so hard to be accepted, before you know it, you're being someone that you're not and that's crazy. I was ridiculed and bullied for being a good student and person. Kids were really cruel. I was skinny and under-developed. Everybody else was getting chosen and getting boyfriends, but now, I'm thankful that God saw something and he chose me."

Michelle is adamant that all three members of Destiny's Child are Christians. She commented, "Beyonce, Kelly and I go to church every Sunday that we can. We read our Bibles lots of times instead of going to a party. We get on our tour bus and have church in the back of the bus. We surround ourselves with Christians and people who are Spirit-filled. We trust God and he still speaks to us. We know that he does. I can't let anybody tell me that because I'm in Destiny's Child I'm not saved. We never know why we're placed in this area or why I was placed in this group. I do know that I probably will get some negative feedback from people, but I can't let them discourage me and try to tell me I'm not a Christian and I'm not saved because they're not God. I know what God has done in my life and I know that God is still with me and he still loves me. I'm here to testify about that. We feel God's presence. I still feel his spirit and his anointing on my life. I can't go far from that."

Michelle is thrilled at the opportunity to record a solo gospel album -the first under Integrity Music's new tie up with Columbia Records -and is keen to emphasise how important the songs on 'Heart To Yours' are to her. "They were songs that healed me while I was recording it, so I'm hoping that - as the CD healed me and as it is still healing me - it touches and blesses others. At first, I was trying to be so careful to satisfy the fan base. Should I say God?' Should I say 'he' or him?' Should I say 'Jesus?' I was worried about it reaching the young people, but they need to hear about God and what he's done for me. As the album went on, I couldn't help but mention his name."

'Heart To Yours' lead-in track, "Heard A Word," was produced by the Grammy-winning team of Louis "Buster" Brown and Scott "Shavoni" Parker, whose studio mastery has translated into chart success for Yolanda Adams, Kirk Franklin and The Prince Of Egypt soundtrack, among others. For Williams, it was very much "hands on" in the production of the album from beginning to end, "Heard A Word" establishes the tone for the album. "God talks to us in different ways. He's your friend and he lets you know that he's there with you and everything will be fine," Michelle explains how her faith guided her creative process. "The whole album is about him being there and being my protection." The theme of trusting in God's protection recurs throughout the CD, especially on cuts like "Everything," which she co-wrote, and ""Rock With Me."

Guest artists on 'Heart To Yours' include the contemporary gospel duo Mary Mary, who groove with Williams on the Warryn Campbell-produced cut "So Glad"; Isaac Carree and Lowell Pye of Men Of Standard, who back her on the rousing, quartet-flavoured "You Care For Me"; and R&B crooner Carl Thomas on a CD-only bonus: a remake of BeBe & CeCe Winans' classic "Heaven". The album also includes Michelle's duet with Shirley Caesar on the traditional "Steal Away To Jesus" (also featured on Caesar's Grammy-winning 'Hymns' CD) and a soul-stirring "Gospel Medley" with Michelle backed up on "You've Been So Good"/"Now Behold The Lamb"/"Jesus Loves Me"/"Total Praise" by Beyonce Knowles and Kelly Rowlands, her "sisters" in Destiny's Child.

For Michelle Williams, a self-professed quintessential "church girl", performing gospel music is a step forward in the evolution of her career. "Some people will do gospel when their career fails, thinking, 'Well, I'll go ahead and do gospel,' but I'm choosing to do gospel at the height of the popularity of Destiny's Child," Michelle confesses. "I didn't want to do it because it was a fad. Gospel is my roots. I wanted to do it because it's in me. It's in my heart."