Mike Jenkins: Testimony Of A Troubadour

Port Talbot-based singer/songwriter MIKE JENKINS has a lifetime of experiences to pack into his debut CD. Tony Cummings went to Appletree Studios to meet him. 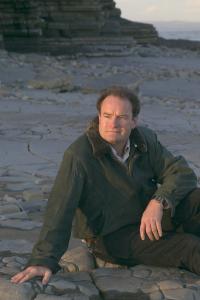 Mike Jenkins is a 45 year old singer/songwriter veteran with literally thousands of gigs and hundreds of songs under his belt. But this is a new experience for him. He is sat in Appletree Studios with engineer/producer Phil Goss recording his first properly produced album. Outside the sun is shining over the beautiful Buckinghamshire countryside but inside the two musos are oblivious as they listen intently to the playback of "Crying In The Sunshine". Mike's voice has a keening, poignant quality as the sombre lyrics conjure up pictures of human lostness. "Crying in the sunshine/Air conditioned rain/Lying in my lamplight/Watching television pain." To my ears, Mike's performance is faultless but Phil thinks there's a better take to be had and also wants to move the mics slightly to bring out all the rhythmic nuances of Mike's deftly picked acoustic. Phil also slightly moves the TV camera which is his visual connection to Mike sat on a stool in the live room. Another take begins.

Later, as Phil goes in search of something to eat, Mike tells me the inspiration about "Crying In The Sunshine". "I wrote it in LA, when I was stuck in a car and everyone was rushing along like hamsters on a wheel." Mike has the kind of fascinating life that would take a book, rather than a magazine article, to tell, but I ask how this world traveller began his spiritual journey. "I'd met a girl in London who ended up coming back to the USA with me. We spent a year surviving in a Volkswagen van. Kim had been involved in the occult and together with the help of some mind bending drugs, we both managed to see some very strange spiritual activity in a wild world adventure. With some near death experiences and exposure to Bible believers of many kinds, I came home with a Bible, but still not surrendered to the Lordship of Jesus. Kim, up until that point, didn't seem to have any interest in Bibles or organised religion, but upon our return to London she had a dramatic encounter with the dark spiritual forces she had been contacting previously, and as a result found a true faith very quickly.

After his relationship had broken up and going off in an ambulance to live in Europe for a year Mike finally came to a point of spiritual decision. "The Holy Spirit finally turned me around to see the real Jesus and my life changed in the twinkling of an eye in the back of the ambulance parked behind the Amsterdam City Zoo. From there I attended Kensington Temple church in Notting Hill Gate for a few years before setting off around the world to 'Go tell.'" Armed with little more than his trusty guitar Mike travelled the world as a musical evangelist. "I have learnt from the Lord how to be effective in many different situations, to witness and minister in church and media situations in over 50 nations to the changing power of Jesus by the guidance of the Holy Spirit. I can only say that the first part of my walk seemed to be learning how to follow Jesus through the particular denomination that helps to bring the truth to light during the beginning stages. Since then I have realised that the Kingdom Church doesn't have stone walls to keep her inside, and that no one denomination has a monopoly on Jesus or the power of the Holy Spirit. I endeavour every day to follow the leading of God's Spirit to give glory to Jesus and know my Father in Heaven as a personal friend; to sing to him as long as I am able and bring other broken people to the foot of the cross to find their own freedom in faith."

Recording some of his starkly eloquent songs have long been a dream for Mike, one that he's finally fulfilling with Phil Goss. "I have found finally found a producer/engineer who has let me play live in the studio, without the click track. To most engineers this sounds like a nightmare scenario, to then try and add overdubs to a track that is not constant with a time clock. I have played live for years on TV, radio, churches, clubs and even on the street and want to keep the songs as real as possible with the best presentation. Only once have I played to a backing track and never wanted to do lip-sinking. The 'X' factor is there when God can flow through what we do; real time or recorded. Phil Goss has similar taste in music to my own and also has a quirky, artistic ear to be adventurous and try things out that stretch the material. We laugh a lot. God's anointing has definitely been around to help us enjoy the process, as well as put something down to touch hearts that are similarly broken." I for one will confirm that the musical collaboration between Jenkins and Goss has produced a truly outstanding album.

FIJI. Your article caught my eye as I have just watch the "Transformations" video "Let the seas roar" about the incredible changes in Fiji when the churchs got together/repentance/reconcilliation took place - even to the point of coral regrowing and and the land becoming more fuitful.

I read about your life and was encouraged as I have just stepped out to follow God in playing the violin prophetically - live music is the best, even if it is not perfect God's presence still comes - great!

Thanks Tony.
Lots to do in Fiji.
Boat out to the islands soon.