Mirrors: Through A Glass Darkly

The second album by independent band MIRRORS from New Hampshire, USA, is out and Mike Rimmer quizzed the band's Ron Adams about their past and present. 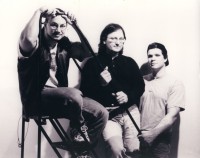 A brief history of Mirrors reveals that the band was formed in 1994 by old school friends, Ron Adams (guitar) and Brett Navarro (drums). Both men had been through periods of drug and alcohol abuse and in the early '90s Ron spent three years in prison for drug offences. It was whilst in prison that Ron became a Christian and on his release he helped Brett deepen his commitment to God. The band began gigging, recorded their first CD 'Brand New Day' and were part of the prison ministry Christian After Care Ministry Aid, CAMAid, which ministers to those first re-entering society from prison. 'Bring It On' is their second album and the band now have Ernie Smallis on bass.

Mike: How would you describe Mirrors' ministry?
Ron: "Mirrors have played at a wide variety of events both big and small. We regularly play coffee houses, Christian music festivals, youth rallies, evangelical outreach doing both the heavy rock as well as the much softer acoustic presentations. We also have had the opportunity to do music at worship services where we also explain who we are and what we are doing. It's important to explain these aspects since there are a lot of people who don't see the connection between heavy music and heavy spiritual topics. We clear it up for them.

"We very much enjoy youth events because of the importance of reaching young people who are forming ideas and positions on spiritual and secular matters and also because there is so much energy that surrounds this group. We are also going to be serving at regional colleges and universities soon by working with the Campus Crusade For Christ.

"A goal of ours is to build strong working relationships with regional and national organisations such as the Salvation Army, Prison Fellowship (headed by Charles 'Chuck' Colson), and Campus Crusade For Christ. We want to build this ministry's musical direction, and establish ourselves with far-reaching regional and national organisations as well as smaller local organisations. Our prayer is to be in fruitful service and that people see and know us as examples of faithful disciples. We also pray about Mirrors becoming a full time ministry and are waiting on the Lord's leading in that.

Mike: How do people respond to the band in a live setting?
Ron: "Playing live can be great fun and a great challenge at the same time. When playing live we've had people yell out to us, while we were explaining Scripture, that 'God doesn't love me!' or 'I'm no good, no-one cares about me!' We've also had people come to us to talk about spiritual matters to learn more or to tell us that they have been pumped by the music and lyrics affirming their faith. We've also had folks simply tells us, 'You guys rock!'

"In the first instance it is time to stop and challenge those people, on the spot. We tell them about what Scripture has to say and that thinking the way they do, they've been lied to! We'll ask them who told them the lie and try to engage them in discovering truth. In the second instance we try to build up seekers, give them something to think about, and attempt to keep in touch with them.

"As part of personal testimony, we also tell them about what we've gone through as individuals and as a group. We have 'lived' a little, paid a price for it, and been saved from it! So, we're on pretty solid ground when it comes to talking about screwed up lives before Christ and straightened out lives after Christ. We are also keenly aware that Mirrors rock is not for everyone. At youth events when you scan the faces there'll be times when you see a stunned parent or other individual. We are a bit energetic playing live and coupled with the music that can be overwhelming to some. With the newly expanded music writing our goal is to appeal to a wider listening audience."

Mike: Tell me about the band's prison ministry.
Ron: "Mirrors is actively pursuing working relationships with various prison ministry organisations to regularly visit and perform in institutions that will permit music ministry in the facility. We have met with limited success, thus far, simply because it is very difficult to 'get in'. Actually, it is harder to get back in to help people than it is to get in other ways! Prison administrations usually balk with a response such as, 'We're not here to entertain.' And, there is training that must be taken, seminars to attend, and a lot of prayer offered in order to realise opportunity. It is a matter of communication and understanding prison culture. Patience is the key operative here, both for those inside and for those outside.

"Having said this, we have played at the chapel at Concord State Prison, where Ron spent three years, which was a tremendous success. We are arranging to participate at Prison Fellowship events in New England, the first of which will be in October this year. We feel we have a unique opportunity here because Ron has been on 'the inside', so prisoners will listen to what he has to say. The afternoon we spent at Concord was an eye-opener for us and a great blessing to watch 100 inmates visit again with 'a friend' and to bring the Gospel to them in music both for those who know him and those who don't know him. We can tell you that the adrenaline was maxed-out that day! We're confident that the Lord will continue to open doors, as he already has, to permit the Mirrors ministry to serve in prisons."

For more on Mirrors visit the Mirrors artist profile