Sixstarhotel: The Irish rockers creating a buzz in clubland

A storming Irish rock band have recently relocated to Glasgow from their Belfast home town. SIXSTARHOTEL are set to do big things, reports Paul Gallagher. 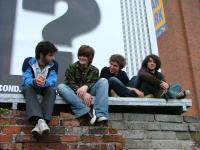 "I've got a pretty weird musical sense... I've actually got a Sarah Brightman album in my room at the moment. Yes, the opera singer." Dave Clements, lead singer and songwriter of hot new mainstream rock band Sixstarhotel, drops this street-cred-destroying bombshell as we are discussing musical influences. Thankfully though, Sixstar are not about to take a leap into the choppy waters of the opera charts. "I like music you actually have to think about", he continues, "like [mind-bending prog-rock grungers] The Mars Volta. It takes me a good couple of listens to understand the intros of their songs, and I like that! Music that makes you think."

For the uninitiated, Sixstarhotel are currently creating a buzz in clubland having relocated in September to Glasgow from Belfast. Formed in 2001 while they were all still at school, Clements, Matt Minford (bass), Tim Anderson (guitar) and Neil Gillespie (drums) spent the next three years tirelessly gigging around Ireland. That hard work was been rewarded with a headline slot at Summer Madness in 2004. But now, their unique brand of emo/alternative rock (a touch of Foo Fighters, a dash of Radiohead, and something completely of their own making) is taking them much further. At Holland's Flevo festival in 2003 they performed an afternoon set on the smallest stage. The crowd's rapturous response prompted organisers to give Sixstar a slot on the main stage for the closing night, playing to over 2000 people.

It's May 2004, and backstage at Rebecca St James' Belfast gig at Whitewell Metropolitan Tabernacle, bassist Matt is taking in the cavernous and plant-heavy reception area whilst ruminating on Sixtars' plans for the year ahead: "We're gonna be gigging a lot more and we'll hopefully be doing a video and recording some more demos. We'd like to do an album, but we don't want to do it on our own. We'd want to do it with label backing, so we could get a semi-decent budget! We would never release something that was half-hearted, or didn't have the best that we could put into it. So basically, we'd like to get signed in the next year." Later on, Clements echoes the same commitment to excellence, but is more philosophical about the outcome: "All of us are going to give it our best shot. And the worst thing that can happen, coming out the other end, is we have to go to uni... which is kind of reassuring! We just want to see if we can do it. And we're all prepared for it to be hard work. I would like to come out of it with a better understanding on life and the sort of work you have to put in, a new perspective and a new direction for us and our music."

For Sixstarhotel, pushing themselves musically will always be the focus, as exemplified by their independent EPs 'Circus Music' and 'Everyone's A Critic'. But in the midst of the pounding rhythms, exploding guitar riffs and impassioned vocals, where does their faith in God fit? "We believe that all of our stuff is God inspired," says Clements, "Every one of our songs links to God in some sort of way. Trying as much as possible not to be cheesy, we wanna show people that Christianity is not always..." He pauses before continuing, "We don't want to shove it down anyone's throats. And we're not necessarily perfect people or living a perfect lifestyle, but we're trying! And I think that's where it fits into the songs: it's about my life, our lives, and how it's fitting in with God and what he's thinking about us, y'know?" You get the impression that, though he is by no means the first person to say these kind of things, Clements really means it. And this is a feeling that permeates all that Sixstarhotel do. Their faith is genuine. Their uncompromising attitude towards making excellent music is genuine. And for once in the realm of Christian music, they have the ability and the creativity to back it up, a fact that anyone who has seen them live will testify to. 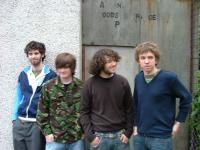 "We're inspired by a lot of great stage performance artists," Clements confirms, "Especially at the moment we're loving At The Drive In and The Mars Volta, and that's one reason why Matt's decided to grow his hair really long and curly! Their stage performance is so energetic and really compliments their music and they love what they're doing, and that's great. Some people might not love our style of music, it might not be their thing, but hopefully they can say, 'Wow those guys are really enjoying it, they're loving what they're doing.' It's also kind of funny, cos At The Drive In went so nuts [onstage], I think, cos they were using 'illegal substances', but we're just showing that you can have a good time and you don't have to be out of it." With these words Clements hits on what is so exciting about Sixstarhotel; they are tapping into a vein of God's creativity and passion that many Christians have been afraid of, or even disapproved of. Sixstar have no such qualms, pouring everything into their music and their energetic onstage shape throwing. They are, in fact, not a million miles from the heart of King David, the man after God's own heart, who threw his body into crazy shapes for the glory of God thousands of years ago.

In a world where talk is cheap, it is this zealous passion for God and surging enthusiasm to make music that puts Sixstarhotel head and shoulders above a host of other bands. Matt Minford puts it this way: "We want people to see something new; something breathtaking almost, that mirrors a bit of who God is. For people who don't know God to see, and hear, and sense a presence of something; something they can't put their finger on. That the music would convey brilliance." A tall order, you would rightly say. But Sixstarhotel might just be the ones who deliver the goods.

yeah six star rock. they played here in dumfries a while ago and completely stole the show. they're such nice guys too! i did an interview with matt "the bass player" minford on my radio show the other night and he was the bestest. they've got the bestest heart for it too. rock on! :D

I agree, SixStar do a super live show!