Moya Brennan: In Search of the Lost Harp

Tony Cummings talks to Celtic singer MOYA BRENNAN about the mystical harp of Tara, the latest King Arthur movie and how she spells her name. 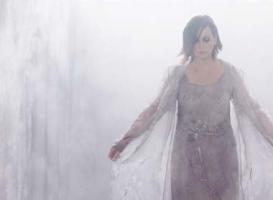 I actually put it down to the spellchecker on my computer changing my name to Marie!" Moya Brennan chuckles as she responds to my query as to why her latest album replaces Maire with Moya. The singer, famed throughout the music world as the "voice of Clannad", continues, "There were simply so many people mispronouncing my name. I know it's a bit late in my career to change it but it seemed a sensible thing to do."

Moya's new album 'Two Horizons' has just been released into UK Christian retail by Fierce! Distribution. It's a stunning concept album. The singer/songwriter has woven the songs around a story rooted in legend based on tales of the hill of Tara and a search for the legendary harp played at gatherings of kings, saints and warriors. "I thought it would be good to approach it a bit differently. People always say they can close their eyes and create different images. I write songs like painting on canvas - I get ideas and I start to build on them. I'm a harp player - outside people love it although it's overused in Ireland as an image. On the road I meet an old man - a 'time stranger' as I call him - and he challenges me with a quest to find the harp of Tara. I wanted to relate to it as a symbol of the way of justice, truth, honour and peace."

Pivotal in the decision to write the songs which were to become 'Two Horizons' was a prophecy Moya received from a couple who attend Moya's church, St Mark's in Dublin. "This couple had a word in America urging 'the harpist to play again' in the presence of 'the high king of all the universe, to spring new melodies.' Back in Dublin the couple came to believe that this word was for me. They would see me playing the harp in the worship band and something connected."

A quote from a 19th century ballad by poet Thomas Moore, "The harp that once played through Tara's halls" also played a key role in a creative and spiritual journey that was to lead Moya to the 'Two Horizons' album. She says, "I was reluctant to go down that path for quite awhile but as soon as I did and started writing the songs I began getting little signs that I was in God's will. For instance, I got this lovely card from someone in our church which had a picture of a harp on it. Then a book arrived for me from the States called The Ancient Harps Of Ireland And Scotland." Moya isn't too concerned that some over zealous evangelicals have suggested that she is courting New Age imagery in her work. "My last album was nominated for a New Age award in America which I thought was hilarious," laughs Moya. 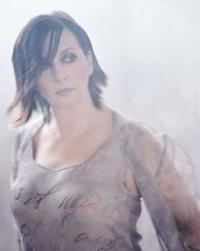 Another exciting development for Moya is the adoption of one of her songs on the latest cinema blockbuster King Arthur. Moya explains how it came about, "I got a phone call after Easter from Hans Zimmer. Now Hans is one of the film world's greatest composers. He's done The Lion King, Gladiator. He asked me to go to Los Angeles and put my voice on what he was doing. After those sessions he asked me whether I'd like to consider submitting something for the soundtrack. On my way back to Dublin I began to get the idea for the song 'Tell Me Now'."

Recorded at London's Air Studios, the result is one of Moya's most haunting songs. I ask Moya what she thought of the movie, produced by Jerry Bruckheimer (Pirates Of The Caribbean, Con Air) and starring Clive Owen (as King Arthur) and Keira Knightley (as Guinevere). "I took my kids to the Irish premiere and they loved it. I have to admit it was a bit brutal but then of course with all those battle scenes it was bound to be. One of the things I liked about it was they took a lot of the magic out of the story and it was quite clear that King Arthur was a Christian."

Whatever the success or failure of the King Arthur epic, it's quite clear that this hugely talented and gentle spirited lady will keep working hard at the music she loves. She has just recorded a song called "Labyrinth" for an album by well known Catholic priest Liam Lawton. Another initiative in the planning stage is a tour of the UK's and Ireland's cathedrals. Enthuses Moya, "I would just love to sing in those beautiful buildings which have uplifted so many down the years. I will sing songs from my two Christian albums and 'Two Horizons' and hopefully will draw in a diverse audience. I'm not sure whether it will be late this year or next year but it is something I am really looking forward to doing."