MxPx: The Bremerton punk rockers back on Tooth & Nail Records 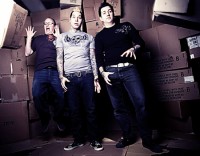 It's been four years since Cross Rhythms spoke to MxPx and a lot has happened to the punk rockers from Bremerton, Washington since then. Most important being they have returned to Tooth & Nail Records, the label which first brought them to prominence. Mike Herrera (vocals, bass), Tom Wisnewski (guitar) and Yuri Ruley (drums) first formed as a bar band back in 1993 but an awful lot of water has gone under the bridge since then. The drivenfaroff website asked what was the secret for being friends in a band for so long. Answered Herrera, "It's just drive and having a focus that's common, which is making music, touring and getting the job done. Obviously, we have our disagreements and we have our own ideas about certain things but when it comes down to it, we just want to get from point A to point B, live life and enjoy life and that's what the band's all about."

So what have been the highs and lows for MxPx? "A lot of the lows came with the highs. As you gain a lot of popularity for the first time and it's all new to you, you get a lot of the bad with the good. You get a lot of criticism. For every person that loves you, there's another person that hates you. You put out a record and it's sort of your little baby and some fans don't like it, 'you're a sellout,' so that's the way it is. The better you do, the more criticism you're going to get. I guess in a way criticism can be good, because it means you are doing well."

2007's 'Secret Weapon' not only saw the band return to Tooth & Nail but working again with the producer who first gave them CCM success Aaron Sprinkle. How did it feel to be working again with Aaron? Replied Herrera, "It was really easy and comfortable. Aaron Sprinkle brought a lot of laid back experience. We've worked with a lot of great producers that we've really enjoyed working with but it was really cool to have the experience of being his first record and over 10 years later, here we are again with him. He's learned so much and gotten so good at what he does. I feel like we did too, you know, through the years. It really made the process super easy and super fun, but it's going to go down in MxPx history as one of the best records we've ever made."

Herrera told jesusfreak website what bands he'd been listening to prior to the songwriting for 'Secret Weapon', "I actually went back and listened to some of our old records and some of my favourite punk bands. . . Rancid, Descendents, Bad Religion, Black Flag and NoFX." Prior to 'Secret Weapon', the band recorded a decidedly raw album, 'Panic' for SideOneDummy Records. At the time of its release in 2005 Tom Wisnewski spoke to fanscape website about the album. "It was kind of a thing where we wanted to go a step backwards. Everyone says, 'Oh, you've matured on this record,' and I think it's kind of like we 'immatured' or 'de-matured', it's kind of like a step back to the way we used to do things. The way we recorded the record, we just busted it out. We did it really quick at our own studio, it felt like the old days. It wasn't like three months recording the record and going out to dinner with the label guy and schmoozing every couple days. It was just bang, bang, bang, in the studio from 10am to 2am every day, all day every day. I don't think A&M would ever let us record a record like this 'cause they would be like 'No, we want you to go into the studio with this guy who wants to charge you $100,000 to produce your record because he made big hit records in the '80s' and 'you need to record at this studio and not your studio because your studio is crap.' When the fact is our studio is great and this record sounds just as good if not better than anything we've ever done. We did it at our own place, we did it in three weeks instead of three months and we did it on our terms."

'Panic' was well received by hardcore MxPx fans but then they moved on to Seattle's Tooth & Nail. Said Tom, "We struggled with the idea to go back to Tooth & Nail for quite a while. There were no problems with SideOneDummy at all. We love those guys and we're really good friends with them. Basically it just felt like the right thing to do to go back. They were offering us a great record deal. We reconciled past differences, which to me was the most important thing out of all of this. We really felt like going back to Tooth & Nail would open up a new chapter to our band. We really needed something new, to be a catalyst, to get people to look at the new album in a different light."

One of the best songs on 'Secret Weapon' is the title track. Said Herrera, "It's a song for the common man or woman. It's about finding the strength within you to live a better life. To use our free will in a positive way." Another great song on the project is "Bass So Low", a call for people to resist the enticements of our modern technology. Said Herrera, "In that song, I'm not saying technology is evil, I'm just saying we let it become our lives instead of help our lives a lot of times. Anytime you're spending more time on the internet than you spend doing normal things then you're losing yourself. It's really hard to learn and to really grow as a person if you don't interact with others or interact with the real world."

Over the years the band have made the difficult move from the Christian marketplace to the mainstream and now back again. Jesusfreak asked the band why they were now back playing Christian festivals and shows? Explained Mike, "When we fired our manager. . .a few years back, we found out that we had been offered many of these festivals. But they were always turned down and never brought to our attention. So now that we know about them, we are playing many of them. We've always done Cornerstone because we knew about that early on."

For more on MxPx visit the MxPx artist profile