My Brightest Diamond: The eclectic singer loved by the hipster generation 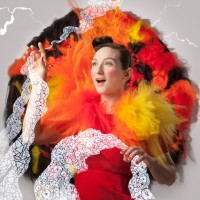 Classically trained singers don't often get the opportunity to record with black gospel legends. But that's just what happened last year to New York City's My Brightest Diamond, the artist name for singer, songwriter and multi-instrumentalist Shara Worden. In fact, it was My Brightest Diamond's vocal on the title track of the Blind Boys Of Alabama's 'I'll Find A Way' album - produced by Bon Iver's Justin Vernon - which made it one of the standout cuts.

My Brightest Diamond has found a niche of enthusiastic supporters by demonstrating a rampant eclecticism which mixes elements of opera, cabaret, chamber music and avant garde rock. Shara grew up in a musical family in Detroit, where her father played accordion and directed the choir and her mother played piano. Her uncle was a jazz musician and classical player, who taught the young Shara to play piano. She told journalist Rachel Cooper, "I really think he had a pretty profound influence on me, in some ways even more than my parents' playing did. I identify with him more now than I do even my parents, musically."

Singing was a significant part of her childhood too, and she gave her first public performance at the age of six. Remembered Shara, "It was a Christmas musical and I had the solo. I had to sing in my nightgown." As a teenager, Worden then headed to the University of North Texas to study opera. "When I was 18, there was really no other musical path for somebody like me. I think I'd only been to one opera in my life by the time I went to school to study it. I loved singing and I really enjoyed looking at the voice but I don't think there was anybody in my life who thought oh, you should go study composition or songwriting. It was just like, you're a girl, you're a singer."

While at university Shara released an album entitled 'Word' in 1998 under the name Shara. Following the completion of her BM in Classical Vocal Performance, she moved to Moscow where she documented several newly written songs and released them on CD-Rs with hand-made artwork as an EP entitled 'Session I'. In 1999, she moved to Brooklyn, New York and began performing and recording as AwRY, gathering a supporting group of musicians playing everything from wine glasses to wind chimes, and eventually added a string quartet after studying and collaborating with Australian composer Padma Newsome. She released an eponymous album, which was largely a reworking of songs from 'Word' and is often referred to as 'The Orange Album: Quiet B-Sides' in 2001, as well as a remix album in 2003. Shara Worden contributed xylophone, keyboard and backing vocals to the CD 'Recession Special' of Bogs Visionary Orchestra in 2003. 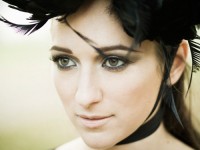 After meeting Christian musician Sufjan Stevens, she became one of his Illinoisemakers and took a hiatus from her own work to perform on his Illinois tour as cheerleading captain. When the tour was over, Worden renamed her project My Brightest Diamond and set to work on two albums: 'A Thousand Shark's Teeth', a collection of songs performed with a string quartet, and 'Bring Me The Workhorse', a more rock-oriented set that was released on Stevens' Asthmatic Kitty in summer 2006. My Brightest Diamond toured with Stevens that autumn in support of the album. In 2006 she did a Take-Away Show video session with Vincent Moon. In early 2007, My Brightest Diamond toured in support of the popular indie band, The Decemberists, as part of their Twilight In The Fearful Forest Tour. 'A Thousand Shark's Teeth' was released worldwide on Asthmatic Kitty on 2nd June 2008, with a US release following on 17th June.

Today Shara is surprisingly critical about 'A Thousand Shark's Teeth'. She told The Indie Handbook, "My criticism of 'A Thousand Shark's Teeth' is that it was very separate and because it was recorded over such a long period of time, there was kind of ideas behind it: I was really trying to work on strings and orchestration, that was really a priority, but the kinds of songs are really all over the place. So I did spend a lot of time thinking about the song order. And the songs that I sort of injected into the album were 'Inside A Boy', 'From The Top Of The World' and 'Ice And The Storm'. So those are all the more poppy, rocky ones and then I also really manipulated 'Pluto's Moon' from its original form. Originally, it had just been a string quartet then I made it into a guitar song. So I had to sort of reconcile myself to doing something over a long period of time and not really conceiving it as a unit. It was really more of a 'here are these ideas that I am going to play around with and see what happens.' This is the fruit of many years of meanderings. The whole time, when you're in the process of committing to an older idea, and presenting it in the present moment, you're like, 'should I really be doing this, or should I just move on?'"

My Brightest Diamond's next album was 2011's 'All Things Will Unwind'. The album actually began as a project to compose music for a programmealled The American Songbook Series. The title was inspired by a conversation Worden had with a friend about the sun burning out. Wrote the Asthmatic Kitty website, "At once accessible and intelligent, the songs were written exclusively for celebrated chamber ensemble yMusic (Bon Iver, Antony & the Johnsons, The New York Philharmonic & Rufus Wainwright) and they are featured on each track. The range of influences on All Things Will Unwind are as eclectic as its' author, but listeners will recognize hints of Roberta Flack, Regina Specktor, Edith Piaf and Antony & The Johnsons throughout the album. Inspired by becoming a mother, chats with legendary performance artist Laurie Anderson, presidential addresses, and class warfare, Worden is metabolizing her influences as only she can- with playful, profound originality. 'All Things Will Unwind' is a picture of an artist maturing; considering joy and pain, beauty and horror, yet bravely standing in the tension between the two - and singing about it."

Today My Brightest Diamond is still performing and planning her next recording. On 30th of this month, she will be playing at a free concert in Chicago's Millennium Park. The 39 year old singer remains one of Christendom's most intriguing talents.