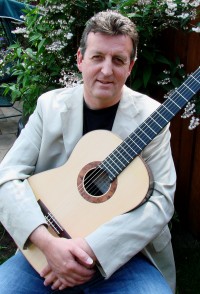 Four albums of instrumental versions of hymns and worship songs have established classical guitarist Nick Fletcher in the UK Christian retail market. But now his album of haunting original compositions 'Cathedral Of Dreams' is taking this most gifted of musicians to a wider audience, receiving as it has extensive airplay on national radio's Classic FM. The Sheffield-born guitar virtuoso spoke about his new found exposure. "To have a national radio station such as Classic FM promoting my music is a great honour. Many classical guitar CDs get released all the time by wonderful guitarists but haven't had the airplay they deserve so for Classic FM to make mention of 'Cathedral Of Dreams' is amazing! There is however, in the classical guitar world, a strange paradox which I have never understood. Steel string players would never dream of performing other people's music! Dave Bainbridge, Phil Keaggy or Gordon Giltrap play what they have written whereas the likes of John Williams, Simon Dinnigan or Craig Ogden only perform works by other people. This was never the case in the past. The work of performer and composer was always linked. The roots of the classical guitar were established by the likes of Fernando Sor, Mauro Guliani, Francisco Tarrega, Barrios to name but a few. At some point in the past the idea of performing and composing became separate in the classical world and I have never fully understood why this came about. But this may explain Classic FM's interest, as to have classical guitar recordings of music composed and performed by the same musician is very unusual."

'Cathedral Of Dreams' is a deeply emotive and astonishingly eclectic album spanning a vast range of influences from the baroque era to Iberian, Argentine and Brazilian dance forms. The dazzling musical soundscapes also include rhythms from Eastern Europe and traditional music from the Hebridean Isles. Nick spoke about his musical eclecticism. "I have a very wide range of musical interests. The classical guitar has a long history of which I feel proud to a part of but into that musical stream feed many other tributaries. Folk, blues, jazz, flamenco and all forms of ethnic music have fed into the river of the classical guitar. The instrument has many cousins in the form of the six and 12 string steel string guitar, mandolin, lute, etc, and of course the electric guitar. It is a wonderful melange that is now shaping the future of this beautiful instrument. I have played many other types of guitar but the delicate poetic nature of the classical seems to suit my own musical sensibilities more than any other type of guitar. I am passionate about South American and Spanish music, which of course is the main stay of the instrument, but I also love jazz and classical music, in particular Jean Sibelius, Mozart, J S Bach, Arvo Part and Keith Jarrett."

The recording of 'Cathedral Of Dreams' took place in October 2007 at St Luke's church in Holton Le Moor in Lincolnshire with Dave Bainbridge, the co-founder of Celtic fusion pioneers Iona, producing, engineering and playing keyboards. The sessions are vividly etched in Nick's memory. "What stand out for me are three things. Firstly the joy of recording in a church with great acoustics rather than in an uninspiring recording studio was a wonderful experience. Working with my old friend Dave Bainbridge was great as I needed to work with someone whose musical judgment I trust and who is also highly creative and skilled as an engineer. Dave is all those things which are very rare to have in one human being! Another thing that stands out in my memory is the pain! We had the sessions originally scheduled for September but I had an accident which damaged my left hand middle finger and couldn't play for weeks. I was not back to full strength with the finger when we recorded but we didn't want to put it back any further than October as it could get too cold in the church to play for long periods of time. However, the results were good but by the second day I was getting a lot of pain from my finger."

Of all the dazzling variety of works on the album, the most ambitious is a 24 minute guitar concerto in four parts "Iberian Fantasy". Nick explained how it came about. "'Iberian Fantasy' was a composition that came about through Dave Bainbridge and me improvising. We just played for hours and recorded everything! We sifted through what we played and found many, almost complete, ideas which could form the basis of a large orchestral type work. We then set to work orchestrating the parts and developing thematic ideas. It was a great joy to work with Dave as he is such a wonderful musician and whose creativity knows no bounds." 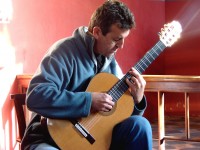 Nick was born in Sheffield, Yorkshire, in 1960. He started to play guitar by the age of 12 and by 1976, after being inspired by such guitarists as Steve Hackett, Jan Akkerman and Steve Howe, Nick took up playing the classical guitar and after watching Christopher Nupen's documentary about the legendary classical guitarist Andres Segovia, Nick started to become more serious about the instrument. Nick subsequently studied the classical guitar for three years with David Taplin at Huddersfield School Of Music where he also became interested in the music of guitarists such as Ralph Towner and Bill Connors and started to write some music for the instrument. At this time, around 1980, Nick met Dave Bainbridge, who went on to become a founder member of the band Iona. The band Dave and Nick formed together became known as Plan B, in many ways a kind of prototype for Iona. They also played together in a jazz fusion type band called Staircase. After these early bands split up Nick started to do many sessions for various companies and artists and formed another fusion band called Trivial Pursuit. By the early 1990s playing the solo classical guitar was to become the main focus of Nick's musical activities.

In 1994 Nick recorded an album of hymns and worship songs for Kingsway Music, 'Classical Praise Guitar: Soften My Heart'. Although not quite reaching the phenomenal sales of similar classic guitar/worship albums by Rob & Gilly Bennett, 'Classical Praise Guitar' did sell well for Kingsway Music and similar projects, 'No Strings Attached' (1995), 'Chords Of Grace' (2006) and 'Six String Hymns' (2007), were subsequently issued. Instrumental albums of worship music often attract accusations of "Christian muzak" from the critics. So was Nick embarrassed by these albums in his CV? "Not at all. Those CDs I recorded for Kingsway have touched many people's lives and that is the role of any musician so I have no regrets. Actually they were a tremendous challenge to record, mix and edit two CDs of material in five days and were hard work. I learnt a lot about arranging and recording the classical guitar from those sessions which was very beneficial to my current CD. I don't think I could have done this recording without having recorded those CDs."

As well as the Kingsway albums Nick has recorded an album of lullabies for classical guitar for Dorling Kindersley. Becoming more involved in record production in the mid 1990s, Nick also produced five Celtic music recordings. He also started to give many recitals of the classical guitar but writing music for the guitar started to become his consuming passion. Some of Nick's best ever recordings have been those on which he has collaborated with Dave Bainbridge. Nick contributed two beautiful tracks, "Silver Moon" and "Red Sun", on the various artists 'Songs For Luca 2' while in 2007 Fletcher and Bainbridge released through Kingsway Music the album 'The Breaking Of The Dawn' featuring deft arrangements of contemporary hymns by Stuart Townend and Keith Getty and named by Cross Rhythms one of the best albums of 2007. But it's Nick's own compositions which are now receiving ever increasing acclaim. Nick's solo guitar works are published by the eminent Canadian classical guitar publisher Productions d'oz and two volumes of Nick's guitar works have been published with more to follow. Now with the release on Iona's Open Sky Records of 'Cathedral Of Dreams' the acclaim is coming thick and fast. Not that Nick is resting on his laurels. As he said, "I have just sent off a new batch of compositions to my publisher in Canada which will be published over the next few months. I hope to record most of them for my next project which hopefully will once again be on the Open Sky label. I have plans to record a new work for guitar and choir! This will be a more meditative work which I am sure will be of interest to Cross Rhythms readers."

Hi nick all been well i hope to come to your lunchtime concert a Sheffield Catheaderal. aall the best and God Blees you and your family.