Nicole C Mullen: The American diva with a message for ya

In the years that I've been doing this music journo gig, I've sort of developed a habit of bumping into Nicole C Mullen. Our paths have crossed several times. I can remember my first ever Dove Awards in 1998; sitting in the backstage press area in what was then known as the Nashville Arena when an extremely proud David Mullen introduced his wife to us as the first African American songwriter to win the Song Of The Year award for their composition "On My Knees" (a hit for Jaci Velasquez).

Two years later - at GMA again - I was randomly going through all the important-looking suites in the Renaissance Hotel, when I came across her, just sitting waiting for someone to turn up. I wasn't scheduled to interview her, but cheekily asked for an interview anyway - and got one. Then there was the interview in Milton Keynes the following year, during which I found myself explaining the finer points of UK garage to her. Going back even further to 1991, I can remember buying her long-forgotten debut CD from her first attempt at a solo career.back when she shared a nickname with Michael Jackson's pet chimp (wonder how much I'd get if I put that on eBay?).

This time round, the invitation to interview Nicole has come from her management over in the US. We were in the last few days of 2004, and she was here to help one of London's mega-churches see in the new year.and, of course, to plug her latest album, 'Everyday People'.

We started off by talking about the new album. "The concept for it was birthed when I was in Africa last year: in Uganda and Kenya," said Nicole. "I didn't go to sing; I went with Compassion International to see their sites and to meet some of the children that we sponsor. While we were there, I met a lot of people who'd heard a lot of my music already, and I was very surprised by that. It hit me that the albums that I do included them. It included people of different ethnic groups and geographical locations and economic backgrounds, and it was something for the everyday person - not just for the elite, or whites or blacks; not just for Americans, but for everybody. A lot of the songs were birthed with that ideal in mind. So it was inclusive when it came to that, but at the same time was exclusive in the fact that it had to exalt Jesus Christ. That was not a negotiable. The style of music is, the instruments are, but the content is not. The content had to display the love of Jesus Christ to a hurting world, and at the same time, it had to be for everybody."

Many of the songs on 'Everyday People' take their inspiration from real life situations, or are about people Nicole has known or heard about. "Bye Bye Brianna" was inspired by a blind girl who drowned, whilst "Dancin' In The Rain" is about the death of a friend's spouse. "Valorie" tells the story of a fellow church member who maintained strength in the face of poverty, welfare and a handicapped child. After coming up with the concept and title of the album, Nicole discovered an old Sly & The Family Stone song with the same title, whose sentiments fitted the message she was trying to convey.

And then there's "Message For Ya" - her collaboration with funk legend Bootsy Collins. "Bootsy used to go to our church in Cincinnati, New Life Temple, a long time ago," said Nicole. "One of my cousins kept in contact with him over the years, and he'd said that whenever I went into the studio again he wanted to be a part of the album. Back when we did the 'Live' CD and DVD, he and his wife came and sat in the audience.and again he said, 'You know, I want to be a part of the next thing you do', and I said 'Okay.' So when I was in the studio working on the song 'The Message', which at the time was called 'Sister Girl', I had a bare track with the lyrics and the melody, and I thought, 'Let me send this to him and see if he feels anything.'

"I sent it to him, and he called and he was like (at this point, Nicole does an eerily accurate Bootsy impersonation), 'Hey Nicole, I'm feeling this song! I think I want to put some stuff on it!' He sent about 16 tracks, just full of love. He put vocals, guitar, bass, keyboards.all kinds of stuff. We mixed it together with what we already had, and.before we knew it, he'd put the love on it, and that's what you have now!"

Nicole has been singing since she was two years old, and writing verses - if not actually songs - since she was 12. Both her grandfathers were Pentecostal pastors and so every Sunday, Nicole, her parents and two elder sisters were singing somewhere. "My parents were both deacons in the church, so we would always have to sit on the front row," she recalls. "I would say we were in church nine days a week! But we had a lot of fun.

"I was eight years old when I gave my heart to Jesus. I was actually trying to get out of a spanking that my dad was going to give me. So I made this deal with God that if he got me out of this whipping, I would give him my heart that night. And he actually did! So I gave him my life, and he took me seriously, because I was serious, and I've never been the same since. I'm definitely a testimony that God not only saves you; he also keeps you."

After finishing high school, Nicole moved to Dallas to go to university. It was there that she met blue-eyed soul boy Tim Miner, who helped her secure a deal with the now defunct Frontline Records label (bizarrely, Frontline signed her thinking she was a rapper). She recorded two albums for the label - 'Don't Let Me Go' (1991) and 'Wish Me Love' ('92) - both of which bombed. After Frontline folded, Nicole built a career behind the scenes, working mostly with David Mullen - the record producer who would later become her husband. At the end of the '90s, she signed to Word and launched her second attempt at a solo career, which has so far yielded five hit albums.

"I think my albums are all like stone-steps on each other," commented Nicole. "They all have a common thread, even though they vary in different styles. They all have their moments of vulnerability, where it's autobiographical, or holding up a mirror, saying 'this might be about you or about me or anyone else; take a look into it.' I think that's on all the albums - from the first Word one ('Nicole C Mullen'), to the second ('Talk About It'), to the Christmas one, to the live one and on to 'Everyday People'.

"The music evolves on each one of them, and it becomes where I'm at. This is what I like today. Tomorrow it might be something totally different, but this is who I am. At the same time, there's the common thread of my beliefs and my values, which are founded first in the Word of God. The rest is just icing on the cake." 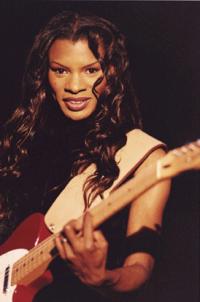 Nicole is something of an anomaly in the still-too-segregated-for-its-own-good US Christian music scene - a scene in which you're automatically a gospel act if you're black, and a CCM act if you're white (and invisible if you're Hispanic, unless you're in Salvador, or your name's Jaci Velasquez). In all her years of turning out good quality albums, she has racked up several CCM accolades. But it has only been with 'Everyday People' that Nicole has finally cracked the Black Gospel charts.

"It is ironic," she said. "I've always wanted to make sure that the albums I made included my people group, and everybody else's too - that's always been important to me. But I think even more so on this last album; there was more of an intentional push. And to see that people are actually getting it is something you can't manipulate. It still shocks me. In the past, most of my albums have been sold in the CCM market. And it is ironic, because I'm a woman of colour; I've never been white and never wanted to be white; I'm glad God made me the way he did; I've never tried to be something I'm not. But God's given me favour in the CCM market as well as the black gospel market. And now I think God's trying to broaden the platform - and I'm excited to see what he's going to do in the future.

You are truly a Woman of God. Your music has touched so many lives. I love My Redeemer and When I call on Jesus. You are doing a great work and may God continue to guide, strengthen you and your family and may the lives you touch give praise and glory to God.

I LIKE THE SONG WHEN YOU CALL ON JESUS I HAVE THAT SONG ON MY CELL PHONE.

Hi Nicole,
My six year old granddaughter has written you a letter. I have been unable to find an address for your fan club. Can you please get that to me as she is anxious to put a stamp on the letter and send it to you. Have a blessed day. We love your passion for Christ. God Bless You-Colleen Berger

i love this song man u rock

Hi Nicole , I really do not know where to begin ,but know that you and a few other christian artist are an inspiritation to me. I have been writing songs for a while now , and I write to communicate with my heavenly father when I can't express it , I sing it and I hear Him answering me,in that I written a number of songs and at the age of twenty eight , I am working on a demo, if you have any advice,or help you could offer me I would love that ,thanks for keeping it real God Bless

Nicole, you are fabulous. Fabulous! I can't wait for you to come out with a new album; I plan on buying your greatest hits - 'cause I've worn all your other ones out! Everyone laughs when they hear "Freedom" coming out of my SUV with a Republican sticker on it! I don't care. God is for everybody. Even for a scotch/irish/native american like me!

You are such an inspiration to all people, black, white, and tan! I recently saw one of you Live concerts on DVD and I was blown away by the energy you gave!
I have been writing songs ever since my mother died, how do I get those songs out there? I have the melody and all for the songs the Lord gave me. Should I start an ensemble? God bless your ministry.

The children love your music in Tucson. I work at a suburban Baptist church on the north side of the city - not much color in our church. For the last two summers we have used your songs in the our children's ministry. The kids accually lead the worship there and they loved dancing to your upbeat rhythms. We used the Freedom, All aboard, and Talk About it songs. Just thought you should know.