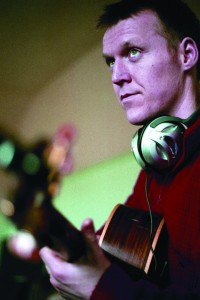 Sarah: When did you first lead worship?

Nigel: I've played the guitar for 20 yrs but in public only for about 10 yrs, which is when I became a Christian. The first time I played in a worship team I wouldn't allow them to plug my guitar in, I just stood at the back and strummed along! My involvement increased as the need required. I have been singing in Church for the last 8-9 yrs, which also began when I filled in for people who were away.
When I became a Christian we (Helen and I) were at a Baptist Church for 3-4 years. I first led at a weekend away when the lady who was leading at the time (who is now also part of the Vineyard) lost her voice and couldn't sing. Basically, if I didn't lead the worship, no one else would. I ended up leading in front of about 20 people and I was terrified! After this I gradually got introduced onto the rota and over the period of a few years I got involved more and more until I finally began co-ordinating it fully - God dragged me into it really! At the Baptist Church, being the worship leader meant arriving early, setting up chairs, setting up PA and rehearsing with the band, and then clearing up again afterwards. It was a pretty thorough grounding in church life and a very busy morning!

When we arrived at Nottingham Trent Vineyard no one knew I played anything for at least 3-4 months. I got involved in serving tea and coffee and was happy doing that. Again, it was only when they really needed someone that I got involved in the worship team. Over the next few years my involvement increased until I ended up co-ordinating the team there.

Sarah: When did you start writing songs?

Nigel: I have always really wanted to write worship songs more than secular songs, although I would really love to see Worship songs make it in the Secular Industry. That is part of what this CD is about - recording worship songs that people can worship to and really enjoy listening to. I have written music for as long as I have played the guitar really, although 98% of it either ends up in the bin or stays between God and me, for no one to ever hear. However, in the last 2-3 yrs I have felt that God has been telling me he wants the Church to be singing about what he is doing in us specifically. So, in terms of actually writing songs to be used in public worship, it has been a relatively short time. I had some significant input from Brian Doerksen when he came over to the UK. He prompted me to take song writing more seriously!

Sarah: How do you filter out songs for public worship from those that are private?

Nigel: Sometimes this is difficult! Often there are songs that are applicable for both. When I write a song an idea develops in my head - often coming from something that particularly strikes me when I hear it in a sermon or a conversation. Brian described this idea as a 'song vision.' At the moment I am actively trying to write songs for the Church, so if a phrase drops in my head I ask 'is this what God is saying to the church, does it apply to us all, or is it specific to me?' If it applies to the church then I will develop it further but I am letting the others fall away for the moment.

Sarah: How long has the current band been together as a worship team?

Nigel: For about 2 yrs

Sarah: The band on the album generally plays each week in Church, How do you generally select musicians for the church group and for the CD?

Nigel: It's difficult doing a Church CD. About 2 yrs ago I felt it was time for the musicians in Church to split into bands. This was tough and I had refrained from doing it for some time because one of the main things I want in the worship team is unity with all involved. This is obviously harder to achieve if we are split into separate bands. We now have 5 bands that play in church; we have a morning and an evening service. I originally selected the bands with a view to achieving a balance between experienced and less experienced musicians in each group. The band you will hear on the album were simply grouped together in this process. We connected really well straight away and all had an inclination to practice hard, and to try and follow God in it all. Currently it seems that the songs we are writing are the ones being used in Church. It just seems that God is using this group of musicians at this time.

Sarah: In terms of musical style and influences, how would you best describe the music from 'Hold On.' Would you say it directly reflects your personal tastes and influences, or is it more a culmination of the whole group's?

Nigel: Looking back 18 months when I felt that God was laying down the vision for us to potentially record this album I had a strong feeling that he was telling us to develop our own identity. I love what other people are doing, such as the Soul Survivor and the Burn Service guys (St Albans Vineyard), and I love some of the stuff coming from the USA, but I wanted a CD that people would recognise came from us. I wanted it to have a 'Trent Vineyard' sound.

Other influences on our style have come from secular bands such as Coldplay, Feeder, Athlete, Radiohead and Doves.

Sarah: What was the motivation behind the album in general, why / how did it come about?