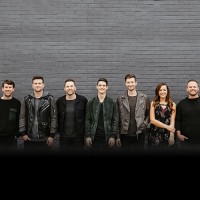 Ever since Australia's Hillsong megachurch broke through to international acceptance, very large churches from all around the world have been developing modern worship ministries which, as well as servicing the needs of their congregations, can in some cases develop into recording artists and touring units to take their original songs around the world. This is the case for North Point InsideOut. Formed at North Point Community Church in Alpharetta, Georgia in 2012, the group released the albums 'No One Higher' in 2012 and 'Hear' in 2015 as North Point Music. Both reached Billboard's Christian Album charts, 'No One Higher' making number 19 and 'Hear' number two.

It was North Point's "Death Was Arrested" song which went around the globe and is now being sung in thousands, if not tens of thousands, of churches. North Point InsideOut's worship leader Seth Condrey spoke to the Hallels website about the song. He said, "'Death Was Arrested' originally started a few years back when our drummer, Brandon Coker, was taking a walk in a cemetery in south Georgia when he came across a tombstone that got his attention. On the tombstone were the words, 'death arrested his progress,' speaking about the gentleman who was buried there. Brandon kept that phrase in the back of his mind, and a few years later he and some other worship leaders from our church got together at a camp and started tossing around the idea of writing a song about the resurrection. They wrote the song, with this amazing gospel message, and sang it at that camp. It has just exploded in our church, is changing lives and has been such a blessing to steward for this season. I think in the beginning it caught us by surprise. We knew from the very beginning the impact it was having on our students and that there was something special there. But I don't think we imagined that it would impact churches outside of our church."

Since their worship megahit, North Point InsideOut have signed with Centricity Music and their EP, 'Nothing Ordinary', has registered with many churchgoers. Seth Condrey told Hallels about the EP's title, "'Nothing Ordinary' comes from a line in the song that we wrote called 'We Are Royals'. It says, 'This is nothing ordinary. There is power in the name we carry.' We believe that 100 per cent. The movement that Jesus started on this earth is something that transforms lives. It's not just something that happens without the hand of God. It's his power! It's the spirit that he gave us. We want not only to sing and lead with that, but we want every church and every person in the world to experience the power of God in their lives. It says in 2 Timothy 1:7, 'For the Spirit God gave us does not make us timid, but gives us power, love and self-discipline.' We believe there's power in the name of Jesus and that it is extraordinary."

On 30th August this year North Point InsideOut released a five-song EP, 'Abundantly More'. The title track features Seth Condrey and Heath Balltzglier, who co-wrote the song with Matt Armstrong and Ethan Hulse. Heath Balltzglier said, "The song is a reminder that in Christ, we have been given everything we need for life and godliness. Scripture says we are more than conquerors and that there is no lack in God. All the joy and the peace that I could ever need comes in seeking him and his Kingdom first."

In the past, Seth Condrey has recorded, as a solo, three popular Spanish-language albums, so it's no surprise that a Spanish-language version of 'Abundantly More', 'Mucho Mas', will be released in the near future. Clearly, there's an abundance of modern worship still to come from the Georgia-based ministry. Said Kevin Ragsdale, director of North Point Music label at North Point Ministries, "When North Point's church partners in Latin America began asking for the songs so they could translate them into their own language to sing at their churches, this became missional for us. So, every time we release a song in English, we plan to simultaneously release it en EspaÃ±ol. When people sing and are moved by the songs in church, we want them to be able to find the songs, and have the songs take them back to that moment they had in church."