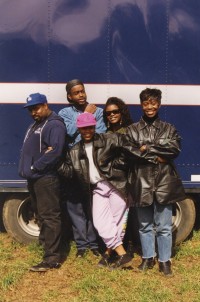 It was 1984, and Black Gospel music seemed on the point of a major breakthrough in Britain. The Inspirational Choir and The London Community Gospel Choir were both signed to major labels, and all of a sudden gospel choirs began turning up in all kinds of unexpected places on our television sets, even in the lower reaches of the pop charts.

When major success eluded the choirs all hopes were pinned on Lavine Hudson's debut album, released on Virgin in 1988 with considerable promotional backing. But somehow Hudson, possessor of what some have considered Britain's finest gospel voice to date and the toast of Detroit, failed to convince the great British public to buy her album in sufficient quantities to dent the charts. Another attempt by gospel to crossover into the mainstream appeared to have floundered.

At the outset of the 90s both protagonists in the romance between gospel and the secular record industry seem to have cooled. People within the gospel scene speak of stagnation and a general lack of innovative and creative artists coming up. One group whose career is causing a stir however are London-based Nu Colours. Having signed to Swedish label Cantio and toured extensively in Europe, their first album has been picked up by Sparrow in America. Recently they were nominated for a Dove Award for Best New International Artists, and have just returned from the Awards Ceremonies in Nashville. It seems that Nu Colours may be the latest British gospel contenders for the big time.

I spoke to the group's main man, one time musical director for The London Community Gospel Choir Wayne Wilson, in his Chingford home. We were joined by lead vocalist Fay Simpson and Wayne's baby daughter Leona, who was doing her first interview. We began at the beginning, with the genesis of the group.

"The group started in October 1988, when myself and Lawrence Johnson were actually involved with LCGC, I was asked to produce the new album for the choir and I decided to change the whole concept and direction of the project away from a choir album to a group album. I felt there was a market for a group of this sort of sound, music and direction, that could appeal not just to the Christian audiences, so I brought several singers together like Fay, Patricia Knight and Priscilla Jones and from there we did this album and released it out in Europe in 1989. We had a great tour, we toured Scandinavia, Germany, Hoi land and Denmark, and it was really good."

So how come a group of singers and musicians from London ended up on a Swedish record label?

"We'd been working with them with the choir for about three years prior to this album - we actually did a live album in Sweden a couple of years ago, so we had a relationship with them anyway, we know them quite well. I sat down with them and said I really want to change the whole concept of this project, make it something entirely new. After careful consideration from both sides we went for it."

Although the album is now quite old, it still sounds fresh, and is a bold step into the crossover territory colonized by the likes of BeBe and CeCe Winans. The group has brought together some fine voices - Fay Simpson particularly impresses and both Lawrence Johnson and Neville Forbes have tremendous potential. The album has already clocked up encouraging sales in the first few weeks of release in America and is hovering around the lower 30s in the Billboard gospel charts. After months of rigorous touring, the group feel they have matured, and can now far surpass the performances on the album - indeed, they seem pleasantly surprised that it has been so well received in America. The US connection came about through their unusual policy of forsaking the UK and touring extensively in Europe, where they were seen by luminaries from the American gospel scene.

Why did they originally decide to concentrate on performing outside the UK?

"It was because the record company and the promotion company were based in Sweden, and we had an existing market because of LCGC, so it was easy to launch the group first in those markets and then start approaching other territories and start building up from there."

There seems to be a lot of support for black gospel music in Europe. What was your favourite concert from the European tour?

Wayne: "The Globe involved several artists from the States, like the jazz gospel group Take Six, who I believe won two Grammy awards in 1989, so they were in demand. Plus BeBe and CeCe Winans, who are doing very well in the secular commercial market. It was because of doing the concert with them that a lot of important people from America got a chance to hear us, and were really surprised to hear something of that quality coming from the UK for the first time. So it started from there and people became a lot more interested in what we were doing. Word got around in the States and people were talking about us, which can't be too bad."

Did they get to meet BeBe and CeCe?

Please i am grateful to God concerning your organisation.Please can you creat a network with us in Africa and other parts of the world?I for one has a group but we need support.