Four years between albums is a long time to leave it. But when you're tilting for the Big Time, patience is much needed. Tony Cummings spoke to Lawrence Johnson of NU COLOURS. 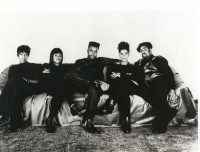 The end of May will see the release in the UK, on Phonogram's Wild Deuce label, of the Nu Colours album 'Unlimited'. Its emergence will bring to an end one of the longest running waits for a second album ever, even by the tortoise-like manoeuvrings of corporate lawyers, high powered managers and all the business paraphernalia that goes on when a major attempts to 'break' a new artist.

For Nu Colours aren't a bunch of young hopefuls putting out some cheerful three-days-in-a-16-track demo disguised as an album. Nor, even, are they the latest contender to become Album Of The Month in the Word Record Club. For Nu Colours have entered a world where budgets are big, egos bigger and where Stevie Wonder or BeBe Winans aren't people whose images stare at you on telly but friends who call you up and come to play on your album. Nu Colours have the world at their feet, at least the American subcontinent part of it. For it's in the USA that the group's album is first to be launched. With 'Unlimited' Phonogram hope to capitalise on America's interest in all things British, soulful and funky.

Nu Colours, or Colours Of LCGC as they were originally called, released 'Man Within" through Swedish Christian music label Cantio in 1989. Four years is a long wait by anybody's thinking. Why has a new album taken so long, I asked the group's man-mountain Lawrence Johnson. "Well, at the time we started we were obviously trying to get a direction. When we put the first album together, it was very much an album of what was left regarding LCGC. We spent a lot of time trying to get the direction right, trying to get the right personnel within the group. At the time we did 'Man Within' it was very much a collaboration of friends we'd worked at within the gospel circuit. After doing that album we then took time to get a tighter five-piece outfit that would be a group. So the first album was very much a collection of friends. 'Unlimited' is the real Nu Colours. We took a lot of time to get the personnel and the direction right."

It was Sparrow Records picking up on the Cantio album and getting it away in the Christian music market that brought Nu Colours to the attention of evangelical Americans. But getting a release and a US Christian radio hit is one thing. Landing the big record deal is something else. "It just grew and grew," chuckled Lawrence. "We were getting offers. In the States four major labels wanted to sign us."

But how did Nu Colours born, bred and living in London end up signing with the American arm of an entertainments multi-national? "Fay (Simpson) and I had to go to America," explained Lawrence, "and while we were there different record companies offered us deals. But then we met with Polygram who put their plans on the table. We spent a lot of time trying to get the right type of deal. Cantio was a small label and the emphasis was really on Sweden, and not the rest of the world. So we left Cantio and started looking for other labels and that's basically why there's been such delay."

Two singles have been released by Phonogram and both have done well without becoming the smashes record execs slaver over. "The first single called "Lies" was a cover - we rearranged some of the lyrics on that. The second song we had out as a single was a song called "Power" which I co-wrote. Both of them charted, the first one got to 52 and the second one got to 55. It's very, very competitive in the mainstream soul/dance market so seeing two singles charting obviously made us very pleased. But what we are after is very much more than being some dance group who get a number one single then you never hear from again. We are a very much more long-term group. I wasn't really into the idea of just going for the quick hit, we want to really take time, show people that Nu Colours have something special to offer."

What about the debate that runs and runs, at least within the pages of Cross Rhythms, about compromising lyrics, Christians getting worldly and the whole moral and spiritual dilemmas of 'crossover'? What did Lawrence feel about the crossover controversy? He thought before replying, "Well, at the end of the day we are gospel artists. Nu Colours wouldn't know any other way. We have decided to stay with what we know. That way then would mean we would be as good as anybody else. To try and venture into just becoming a soul band or pop band would be a situation where we would be working out of Ignorance. As it is, I believe Nu Colours is working to its strength - gospel music, so what we felt we wanted to, what I've always wanted to do is to maintain the performance element of what we're doing."

Immediately after we spoke Lawrence, Fay and the guys were due to fly out to the States to shoot a video. Didn't all the globe-trotting mean they were becoming disengaged from the local church? "We're all members of churches and we go whenever we're home. Church is life and blood to us. Church is where we receive blessing," Lawrence said.

Lawrence is adamant that Nu Colours and other gospel groups like them have the potential to make a spiritual and moral difference in a pop music culture that has become obsessed with its hedonistic pleasures. "As a Christian I'm tired of seeing Madonna, Michael Jackson, Prince have the negative effect they're having on young people. We have got so many talented black artists as well as white artists who are Christians and yet we never get a chance to be in a situation where we can make some sort of difference and make kids say 'I want to be like them.' I think that is something that has been given to us by the Lord to try and do. We don't feel that we are the only group doing it. We don't think It's going to come easy. Nu Colours are going to have to work hard. Vocal talent alone is not enough. It's going to need spiritual integrity as well."