Ohio Avenue: The Alabama trio with the "Catch Me" turntable hit

The appearance on the Cross Rhythms radio station's playlists of "Catch Me" by American band Ohio Avenue brings to international attention a trio from Alabama who have been tirelessly offering their brand of modern rock since 2005. The vocalist, guitarist and keyboard player with Ohio Avenue, Derek Williams, gave his reaction to the news that the three Cross Rhythms stations were giving airplay to "Catch Me": "That's awesome! We feel so international now! 'Catch Me' is a song about change. I like to be in control and when I go through change and things start moving so quickly that I can't keep my hand on it all, I don't like it. No one really likes change. No matter what kind of change it is there is still the feeling of you losing grip of what you had before and of losing control. In the middle of that free falling feeling, sometimes you do just have to let go and trust God to catch you."

The band consists of Derek Williams, KC Mitchell (lead guitar) and Chad DeFoor (drums). Explained Chad, "We have had a few bass player changes in our band. We are currently using bass tracks with our live set and it seems to be working out really well for us. The band's vision was to play original music that could influence people in a positive way."

The band started as worship leaders in their local church, but the group soon felt God taking them in a different direction. They created a new project that focused on writing original music, which eventually became known as Ohio Avenue. Their name was inspired by a street in Indiana where lead singer Derek Williams grew up. Explained Derek, "When my parents separated, my mom felt like God was leading us to Alabama and away from the city I grew up in so we could start over again. We left a lot of comfort and security behind to follow God's leading. When we decided to start the band, all of the band members left things behind that were comfortable to us to step out into the unknown. It reminded me of how I felt when we moved from Ohio Avenue to follow God for the first major time in my life."

The band have two independent EP releases, 'Make Me Believe' (2006) and 'Make Me Believe Extended EP' (2007). Despite relative newcomers the band were able to get well known producer Barry Blair (Audio Adrenaline, Bleach) to produce them. Their first single, "Close To Me", was one of the most requested songs on the Jon Walden Show at 93.7 WDJC in Birmingham, Alabama. Ohio Avenue landed opening slots for bands like Kutless and Superchick and performed at national Christian music festivals including Cornerstone, Enfuego and Rock The Light. The big step up however was their first full-length project, 'The Sound', released in late 2009. Produced by Adam Smith (Brooke Barrett Smith, Britt Nicole) 'The Sound' is a punchy set of melodic rock with "Catch Me" being a particular standout. 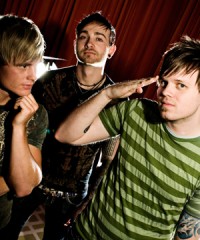 Cross Rhythms asked KC whether Ohio Avenue were happy to be labelled a full on ministry band. He said, "We don't change who we are, how we act or what we play no matter what type of venue we're in. So if some people want to call us a 'ministry band' that's fine, if some people want to call us just a 'rock band' then that's fine too. We try not to label ourselves with anything that may limit us to a certain demographic. Nevertheless, 'ministry' may not be obvious in our title as a band, but as individuals it's the most important thing to us and sometimes feels like it's the only reason we still leave our friends and families at home to pursue music."

Already Ohio Avenue are writing songs for the followup to 'The Sound'. Said Derek, "There are always new song ideas floating around. The hard part is trying to balance everything out so we have time to actually FINISH the songs, ha ha."

Cross Rhythms finished their interview by asking KC what spiritual lessons the band have learned in the last year or so? "In the past year I've learned and relearned 365 spiritual lessons. Should I list them in alphabetical or chronological order? Just kidding. One main lesson we've learned: The only thing you can FULLY rely on is God."

They came to my college and played last month. Really great guys and great music. I love their CD.
I never knew they played with Kutless before though (one of my favorite bands)!
I hope word spreads of this band and they get more known. I'd like to see and hear from them some more in the future.