New rock band from Toledo, Ohio, SANCTUS REAL give their responses to the famed quizmaster. 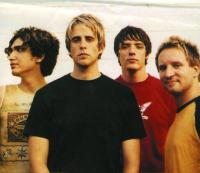 What's your favourite Sanctus Real song?
"Say It Loud". I wrote the song after graduating high school in 1998 and we've recorded it three times now because we really love it.

Who's your rock 'n' roll hero?
Steven Tyler of Aerosmith.

What was your response when you learnt that your 'Say It Loud' album had become the best selling rock debut on Sparrow Records?
With Sparrow putting out such great rock bands as Switchfoot and The Elms, it was a great honour for us.

Do you fancy trying extreme sports?
I wouldn't mind giving motorcross a try.

We understand it was a talent contest run by a local classic rock radio station which gave you your big break. What happened?
We heard about it and entered at the last minute. We came in number one, then got a chance to play our first club show, followed by several months of touring. So far we've played all over the country.

Anything you particularly want to do this year?
Get in shape. That's the one thing I'd really like to do. I just struggle with discipline.

You made independent albums before you got signed. Were they a help in landing you a record deal?
Chris and I went to GMA week in Nashville with our backpacks filled with copies of our last indie CD. We passed them out to everyone we saw. A week later the phone started ringing off the hook. Sparrow execs flew to Toledo, saw us play and the rest is history.

What keeps you excited about touring?
People that normally would not respond to our kind of music have found out about us, come to our shows and had their eyes opened. Some have accepted Christ.

What's the most important thing for the band?
Being real, just as our name implies. Our songs talk about our real life experiences and relationships, especially our relationship with God. More than anything, we hope people will see how much we love God.