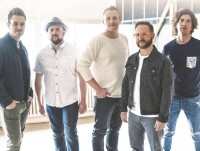 THE FIRST new music for two years by Grammy-nominated rock band Sanctus Real has been released. The single "Safe In My Father's Arms" features the band's new lead vocalist Dustin Lolli. Said the band's guitarist Chris Rohman, "It was during a particular season of walking through so many unknowns when this song was written. We had to take a moment and look back so we could see the path God had brought us down. Once we did that, we wanted to write a song that expressed the joy we felt knowing God had been with us through it all and what it feels like to be held so lovingly by him."