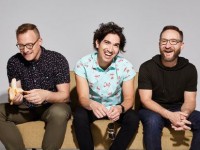 TO HELP those in Texas affected by Hurricane Harvey rock team Sanctus Real have released their single "Changed" two weeks early. The release is to raise money to directly help the flood-stricken community of Rockport, Texas. The band was scheduled to perform in Rockport at Seafair on 15th October.