Oleta Adams: The R&B singer turning to gospel and entering the CCM charts 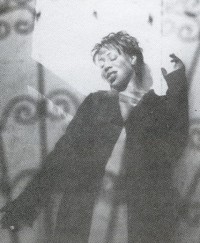 By any perspective, whether you're looking for fiery, soulful traditional gospel or R&B-laced contemporary. Oleta Adams' surprise move into God-songs with her' Come Walk With Me' album is a quality product. It has even produced for UCB Cross Rhythms a major inspirational turntable hit with the title track.

Oleta's rise to the top in showbiz came through the unlikely route of Britain's Tears For Fears. On their 'The Seeds Of Love' album they thanked a then unknown Kansas City R&B singer and piano player for "authenticating our soul". The Tears first heard Oleta perform at the KC Hyatt lounge while on the road a couple of years earlier. Adams describes her show in those days - with a trio, doing three one-hour sets five nights a week - as a setting not unlike her current live nightclub performances. And famous musicians often dropped in for a nightcap after their own shows -KISS, James Taylor, whoever was coming through town. "I didn't bother them," Adams says, "they didn't bother me. When I heard Tears For Fears were in the audience, I thought, 'How nice, but what are a couple of British techno-pop boys going to do for me?'"

It was over two years before the band's Orzabal tracked Oleta down on the phone; soon after, Tears For Fears invited her to sing on the album. In fact, her duet with Orzabal on "Woman In Chains" opens 'The Seeds Of Love', establishing a vibe that is indeed soulful. Adams then did a six-month world tour with Tears, her white baby grand on a pedestal at centre stage, her soulful voice and presence a balm in the rough waters of an emotionally turbulent, high tech sea.

Raised in the church as a minister's daughter, Oleta found singing gospel music came as a natural talent. By age 11, she was leading four different choirs in her father's congregation. She walked away from the faith for a while, she admits, but returned to it just months prior to recording with Tears For Fears. "In 1987," Oleta says, "I made that commitment to Jesus as Lord."

Her three albums on Fontana/Mercury took her to pop prominence with her debut release, 'Circle Of One', garnering the hit song "Get Here" (the unofficial anthem of American troops in the Gulf Way), two Grammy nominations and a tour with Michael Bolton. 'Evolution' followed in '93 as well as a tour with Luther Vandross. then in '95 'Moving On'. Oleta's eclectic approach adds touches of pop, jazz, classical and light funk to her R&B and gospel-tinged numbers. The New York Times noted: "Oleta performs within the pop lexicon without letting it transform or cheapen her talents. Her classically trained voice is nuanced and she coaxes quiet tears from her listeners as often as she inspires spontaneous, one-person standing ovations. She dares to be overtly inspirational, vulnerable and loving."

In 1996 Oleta recorded 'Come Walk With Me'. "The circumstance worked out for me to work with a person I trust completely. A friend of mine, Raina Bundy, is vice president and general manager of Harmony Records. She invited me to do this project with her, and she's probably one of the few people I would trust with it. It was a wonderful opportunity that I did not want to pass up."

About the album Oleta comments, "I didn't do it for entertainment purposes. I had something to say to people. I hope someone will listen, and their lives will be changed, that they will come to Christ. That's why I made this record. Gospel records, realistically, are a labour of love. I didn't do it for money or other reasons."

For this album, Adams wrote five songs herself and gathered the rest from Christian friends and her home church's United Methodist hymnal. Of her version of Charles Tindley's "Beam Of Heaven" she admits, "I had to do something from the Methodist perspective, but I was raised in the Baptist Church (and) you know you can't escape that gospel and Baptist connection - after all, I was raised during the Mahalia Jackson days."

The difference in preparing a gospel album, says Oleta, is that "I got the material from the source, from the Word. I usually try to do that anyway. When I write or sing a song, I want it to be something that I can relate to. When I write tunes about a relationship or people or whatever, I usually look around me or inside and find those things that seem to be true to a lot of people. Otherwise you're just writing a bunch of fiction. In gospel music, the Word has already been written. You're just trying to express it in a way that assists people to come to Christ."

But Adams doesn't buy into a separation of her work as either Christian or secular.."If you look at the songs I've written (for the general market albums)," she says, "like 'Love Begins At Home', we're still trying to save families, we're still trying to save lives. I meet people all the time who've heard my music and have heard the Lord in my music, even before this gospel album. I think that's the way it should be. A tree is known by the fruit that it bears. If you're being faithful, people are going to see that; they're going to see that the Lord is a part of all of your life. In all my interviews I'm clear that my faith is central to my life, whether it's Oprah's show or with Regis and Kathie Lee. I've never made it a secret that I'm a Christian. A gospel set is always a part of my show. I just tell the audience not to worry - nobody's going to become a Christian unless they want to.

"In everything I do," concludes Oleta, "I'm true to myself. The only thing I know how to create is what I already know. People ask, 'How long you been singing for the Lord?' and I tell them, 'All my life.' The Lord gave me the gift and the resources to use the gift so I can't separate it."

Tony Cummings acknowledges the use of an interview Oleta gave to Brian Q Newcomb originally published in CCM magazine.

In my opinion Mrs. Oleta Adams is an extraordinary Talent & her Come Walk With Me cd has brought me comfort in some very uncomfortable moments in my life. I RESPECT her as a artist & as a Human being. She is never in Tabloids & carries herself as a woman of God. A lot of today's fare I say artist now a day lack the Passion that Mrs. Adams exhibits. May God continue to bless her. Oh and I say her Voice is Absolutely exquisite. Blessings

I love Oleta's voice and the songs she has written. I only wish the sheet music was available for songs like "I just gotta sing my song" and "I just need to hear your voice". Does anyone know how I can get my hands on these two?