Out Of Eden: The sisterhood of song

From talking to the animals to three unique albums, OUT OF EDEN have certainly progressed from the days of singing at local churches. Ruth Dodd gets the low-down. 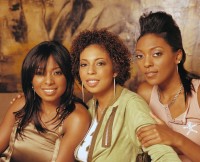 In 1994, the foundation of Gotee Records was built around three sisters who called themselves Out Of Eden. Lisa Kimmey, Andrea and Danielle were of course those sisters who brought a whole new R&B vibe to Jesus lyrics. Their success has been truly phenomenal. Over 450,000 lifetime sales; an appearance on Brandy's Moesha sit-com; their song 'Greater Love' on Eddie Murphy movie Dr Doolittle; and phenomenal radio success in the USA.

From starting in Nashville, Tennessee, the trio went on from dancing and singing before their mother to singing for dc Talk member and co-founder of Gotee Records Toby McKeehan. Remembers Danielle, "Toby wanted to sign us and then shop us around and get us a record deal. Well, no one would sign us because they wanted to put us in the black gospel section, but we're not black gospel at all. That wouldn't work so Gotee Records actually came about so we would have a record company that knew which kind of category to put us in.

The first album they released under the wing of Gotee was "Lovin' The Day1. "That went really well for us, it was kinda like a breath of fresh air for the industry, something new. We actually had to fight a lot of battles to get people to hear it and understand it. Then we came up with "More Than You Know1 which opened even more doors and established us.'

On being asked how they broke into their current circle of high profile pop and R&B stars it seems there can be one answer. "A lot of times it's just God opening a door otherwise no one would have heard our music. Like Dr Doolittle, that was a record company thing. Then we appeared on a brand new show Moesha after a writer heard our CD from a friend and then decided we had to be on the show. So little hook ups like that have been happening throughout our career.

Eldest sister Lisa co-writes the group's material, hearing and retaining not only melodies but full vocal arrangements in her head. "Singing with my sisters is like a dream because they catch onto ideas so quickly and always have, more to add.' Their latest album 'No Turning Back 'reflects their perspective that being a Christian doesn't mean that you are suddenly living in a problem-free zone. "Lyrically, I think it's the deepest thing we've every done because in it we're trying to show that as Christians we go through a lot of hard times, stuff that we think nobody else may go through, or stuff that a lot of Christians are afraid to address. We sometimes want to pretend everything's always great. But we're here to say it's not always easy. Then again we don't have to be in the dumps, we don't have to be in despair because we have Jesus Christ to bring us through whatever we're going through:

However, it is not only their deep Christian faith which come across on the latest album, it is also clear that the band have another message they want to share. "A lot of our ministry naturally comes from a girl's perspective and I just wanted to write an answer to all the slow dance, bump-and-grind songs to let girls know the right idea of love, and that true love really does wait."

There is n doubting that Out Of Eden's faith is very important to the band, it's evident in their music and also their day to day life. "When you're in the presence of God it changes you, it makes you a completely different person. If you're always surrounding yourself with worldly things then that old man comes out. Whereas when you're in the presence of God, God renews you completely. I would just say it's so import to stay in the presence, to stay at a place where you're in God's will, where you're reading the Bible and you're praying because that's the foundation of our faith, to have a relationship with Jesus Christ and without that we can't stand. It's very, very important to get to know who Jesus really is."

Their latest album, released in July, has a very wide appeal as Danielle comments, "We're so excited about this one. It definitely has a really good dance feel, it's one of those 'gotta tap your feet' things. Also, it's got some of the prettiest ballads we've ever done."

Not only that but the album also features guests such as the Katinas, GRITS and Knowdaverbs. The hottest news is that the sistas are planning to tour Europe. "Well, as far as Europe goes, we're doing the Flevo Festival in Holland and we have a show in Sweden. As far as England (is concerned) we're trying to get there but we haven't made it yet."

Until these supremely talented ladies do so, we Brits will have to make do with the breathtaking 'No Turning Back' CD.