Paul Bell: A Small Town Boy with a guitar and an itch to travel 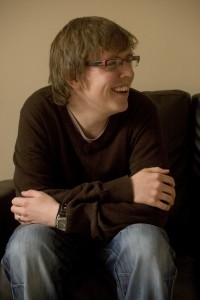 Paul Bell has moved around a bit and currently lives in Nottingham. Despite this, the talented singer/songwriter has achieved a sizeable fanbase drawn to his warm and witty observations of life while his trickle of albums down the years, 2006's 'Human Conditions', 2009's 'Name In Lights: Live In Sheffield' and 2011's 'While We Sleep Tonight', show him to be a consummate crafter of a memorable pop song. With his latest album 'Small Town Boy' getting some favourable reviews now seemed an appropriate moment to quiz the songsmith about his musical career. I began by asking him whether he was able to get a living out of his music. He responded, "I think what they call it now is a portfolio career. The website designing pays some of the bills, the music stuff pays some and I've got a paper round as well." He also occasionally plays on other artists' projects though he was hazy about the details of his latest venture. "I think it was a live worship album. We're not supposed to speak about these things, but occasionally we enhance a few things on a live worship album. I entered into the spirit, so we recorded it all in a tent in the studio."

I asked Paul whether the 'Small Town Boy' album title referred to him. He responded, "I guess there's a little bit of autobiography and a little bit of inspiration from other people's lives. You could say I'm a small town boy. That's from a song called 'California', which talks about the fact that I've never been to California. I was sat there one day thinking, 'Wouldn't it be exciting to fly off round the world, go to California?' You hear those songs about Route 66, '(Sittin' On) The Dock Of The Bay' - such evocative stuff comes out of America and you go, 'Wouldn't it be great to do that?' I was sat in my new hometown, an ex-mining town: it doesn't feel quite as exciting. That was part of the thought behind it, but then in the chorus it turns round, thinking about where the real important things are. It's not to do with where you are, it's to do with family, relationships."

Of the songs on his new album one which is attracting particular attention is "Four". He recounted, "I was playing that at Spring Harvest this year and a lot of people were saying that song had meant something to them. That was inspired by my kids, four and two years old. It's called 'Four' because more things rhyme with four than two, I suppose. You get this real enthusiasm from young kids, that excitement and wonder at life. I love that. You don't get a lot of cynical four year olds. 'Bend' is a song that uses a metaphor of trees that bend in the wind. If the strong winds come, if they've got that flexibility then they bend; if they don't have that flexibility then they're blown down. A few people in my circle are going through some tough stuff: 'I hope you bend, I hope you don't break' - about having that grace, that capacity to have a bit of give-and-take. There are a few different sorts of songs on this album."

So on his album, what was the most Christocentric song? "I can't remember who said, 'Songs about the light and songs about what we see by the light'. There isn't a lot of Jesus-centred songs as opposed to the last album: 'While We Sleep Tonight' was very much a prayer. There's a song called 'Love Is Happening' that talks about God being in those situations where we think it's not likely that you'd find God - difficult situations where we sometimes say, 'Where is God?' God is in the middle of those situations. There's more metaphor than straight-up references of Jesus. It's in my mind when I'm writing, but it's not always at the centre of the lyrics. It's not an intentional thing, it just seems to be the way that the songs have come."

In the past Paul has been known to perform and record songs about slightly unusual subjects - biscuits, for instance. Are there any oddball songs on 'Small Town Boy'? "Not on this particular one. There is a song on the second album which was about biscuits; one about my sock drawer, one about things I should've learnt. On the last album there was a song about jumpers - the benefits of jumpers. On this one I guess the daftest one is about kids, 'Four': 'I wish that I was four/I'd get to dress up more/Spend more time outdoors/I wouldn't have to pay the bills/I'd get Calpol when I'm ill.' It's more whimsical than just being daft."

Previously a number of well known musicians have played on Paul's albums. This continues with 'Small Town Boy'. He explained, "I decided to work with a couple of different producers that I hadn't used before - just to get a different perspective on the songs, a different sonic landscape. This one we worked with Dan and Matt Weeks, who you might recognise from various CD sleeves. Matt Weeks is a bass player, but also plays a number of other things - he plays some great brass on the album. Dan Weeks is a drummer, but he also plays a lot of things. They brought some great sounds to the album. This time we used an extra guitarist, a lapsteel player - guy called Russell Smith. There's a lot of that sort of slightly Americana, slidey-type stuff going on in there; it's just a really nice texture. Different sounds."

Considering the large number of gigs Paul has played in the past, has he managed to retain his enthusiasm for music-making? "These things develop as your priorities change, but I still enjoy travelling, I still enjoy singing and writing songs. Particularly writing songs feels like it's part of who you are, in a sense: that's part of your creativity, and it would be a shame not to have that out there. I keep writing the songs that come, just seeing where it takes it. There are a few ideas bubbling under the surface. I tend to go in seasons: it seems like a big sprint to get to the line writing an album, then it takes a few weeks or a few months to get back into it."