Paul Bell: A song-by-song run through of his 'First Light' album 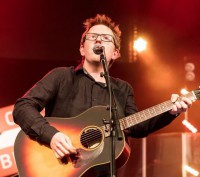 "Beautiful And Brave"
The journey of this song started when some friends I'd not heard from for a while posted some news on Facebook. They'd given birth to a beautiful daughter, Beau Matilda, but sadly Beau was born very premature and only lived for a couple of weeks. Beau's mum Jody wrote so beautifully about their loss, and also about the way they and their friends had chosen to remember Beau with something called Beautiful And Brave Fortnight to mark the anniversary of Beau's short life. Everyone would do something beautiful or brave. I was really touched by the way they had mixed their grief with hope and I was really inspired and wanted to share the story and the sentiment, and to remember Beau Matilda, which means "beautiful and brave".

"Down The Middle"
We so often want to point to the issues outside of ourselves, rather than face up to our own failures and inadequacies. We all have the capacity for beauty, brilliance, goodness and also the potential to make a real mess of things. As Aleksandr Solzhenitsyn observed, "The line separating good and evil passes not through states, nor between classes, nor between political parties either - but right through every human heart."

"Even When You're Gone"
This was one of the first songs I wrote for this project. My Dad passed away in 2014, and this song came out of that experience. Like ripples on a lake, or the planting of a seed. . . we don't always get to find out the consequences of our actions or the effects of our affections. But looking back, I can still recognise the legacy of the kindness I've been shown by my Dad, and by others. I see it in family, in friends, in myself. So this is a song of hope and confidence that the love we show to others makes a difference far wider than the small part we see in the moment.

"Look Back, Smiling"
When we look back on life, I'm convinced that the most precious things are the times we spend together. Not just online, but face to face. Where we're accepted, we're known, we're loved. I wanted to write a song that celebrates those genuine connections, whether fleeting or lifelong.

"Not Goodbye"
This is probably the most personal song I've recorded, about the experience of losing someone close to me. There is sadness, but also hope mingled in for a promised reunion. This is for Dad. I'll see you someday, on the other side.

"Mend The Cracks With Gold"
When something is broken it's easy to throw it away, or replace it, but in the Japanese ceramic technique Kintsugi, broken pottery is repaired with a glue mixed with gold, to become more beautiful than it was before. The cracks become a feature, part of the story of the object, and are celebrated. I wrote this as a song of hope for those who feel messed up, or broken, or who feel like their mistakes rule them out. It could be better than it ever was. . .

"So Bright"
This is one of a few songs on the record which are songs of belonging, songs of togetherness. I love those opportunities to gather, to bring our questions, our worries, our failures and our hopes and know that we're accepted. There is reassurance and comfort that comes in that moment.

"Love. . . It's Gonna Be Fine"
It's my privilege to perform at some wonderful festivals around the UK, and this song was written for Greenbelt 2015 where I was performing. The theme that year was R S Thomas' poem The Bright Field and it was beautiful to sing it there and be told by some in the crowd that it summed up Greenbelt for them. In a world where we often divide into our separate camps, or rush on to the next thing, there is something really beautiful and healing about taking a moment to gather together.

"Things No-One Knows"
I wanted to write a song about questions. There will always be areas where we don't see clearly, some of the answers to the "why" question will be bigger than we could get our heads around. Faith doesn't give us all the answers. In many ways it gives us something better - the promise that God will walk with us.

"Safely Home"
At every stage of life, at its beginning and even its end, I believe we can know the love of a heavenly Father. This was another song of comfort. Do not worry.

"What Matters In Time"
The record finishes with some words of encouragement, however unqualified I may be to give them. In many ways, it's a song I'm singing to myself. To keep leaning into love and wonder and hope. To keep a soft heart in the midst of difficulty and to resist independence in favour of interdependence. I can be slow to catch on to the most important things.