People Who Do People: A look at Christians tribute artists

TV's Stars In Their Eyes has demonstrated that "Tribute" Artists and Bands have a huge following. Surprisingly, there are a number of Christians now working in the field. George Luke spoke to Roy Orbison, Tom Jones, Elvis Presley and Belinda Carlisle... kind of. 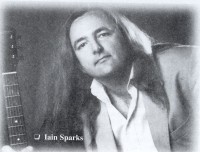 These days, it goes almost without saying that when a band or solo act hits the big time, there'll be at least a dozen look-alikes or "tribute" bands following. Millions tune in to watch Stars In Their Eyes on Saturday evenings, and groups like Bjorn Again, No Way Sis, and assorted takes on the Spice Girls (including one made up entirely of men in drag) pull in audiences nearly as large as those of the artists they imitate - and cost less to see, too (sometimes they even sound better than the real thing!) For struggling musicians, musical tributes have become one good way of pulling in regular work, whilst waiting to be discovered (as yourself, of course). Here, we meet four of the growing number of Christian musicians who've made it as tribute acts.

Iain Sparks Is Roy Orbison
When an agent first suggested to lain that he audition for the lead role in a West End musical based on Roy Orbison's life story, his immediate reaction was to laugh his head off. "It was the most ridiculous idea I'd ever heard in my life," says lain. "I couldn't sing like Roy Orbison; I certainly didn't look like him. But the agent talked me into it and I went along. We had a week's rehearsal, and to my surprise I came second." This was enough to convince lain he could do Roy convincingly - and since then, his Big O Show has placed him in the top league of tribute artists in Britain today. Since childhood, lain had wanted to be a singer, but opted for a career in catering. He spent 18 years as a chef, during which time he cooked for the Royal Family and a number of celebrities (by coincidence, whilst he was auditioning for the Orbison role, Roy's widow Barbara was staying at the hotel where he had his day job). After becoming a Christian, the desire to sing returned. "I was lying in my bed one day, reading a Christian book," says lain, "and I just sensed that the Lord had stuck his head into a corner of the room. He said: 'lain?'; I said, 'Yes?' He said: 'Can you say this prayer for me?', and I said: 'Yeah, sure - what is it?'. He said: 'I want you to ask me for a musical ministry.' So I said: 'Sure Lord - can I have a musical ministry, please?' and he said, 'Sure! I want you to go away and think about it; tell me exactly what you want, and then I'll do it.' So after a week, I sort of phoned him back, if you like, and said that I just want to, you know, be a Christian songwriter and have reasonable notoriety in my locale. He said, 'Okay, I'm going to anoint you for it in two weeks time.'

"After another series of miraculous meetings with people, I ended up going to Mission To London. Someone there prayed for me. There were all sorts of exciting manifestations going on in people around me, but I felt disappointed, because I had one of the less interesting characters pray for me. It seemed like a bit of an anticlimax, but when I got back to my seat, I just thanked God for what he was doing. I got three colour photographs of me performing - which were at least 10 times bigger than what I'd asked him for. I set about writing my own album, which has taken an awfully long time to complete - it's been very difficult. But then again, I just can't believe that within a matter of months I'm right up there with the very top names in tribute artists. It's remarkable that I've found it so easy to imitate Roy Orbison, who's notoriously difficult to imitate."

Following a stint in Bible college, lain was one of the second intake of students enrolled at Kensington Temple's School of Creative Ministries. "I really believe that God wanted me to be there," he says. "It was difficult financially, but I did manage to complete the course with lots of miracles along the way. I really view that as my foundation. I think it was what God did personally, rather than the actual practical side of it - although that was very good. I believe that God did things in me then that have given me the staying power and the professionalism and the dynamic element of my personality and my performance on stage. He really put a strong foundation in there, and I wouldn't be where I am today if it wasn't for me doing that course."

Beside his tribute work, lain has worked with Stuart Hall and supermodel Kate Moss; appeared in television adverts, and did a spot of backing vocals for Barry Manilow on one of his UK tours. He was also at the 1995 BRIT Awards, in a choir accompanying Sting and M People's Heather Small ("both those gigs," he says, "sound a lot more glamorous than they actually were"). His main preoccupation, though, is his own singing and songwriting - and the long-agonised-over album is due soon. "A lot of people in the church criticised the kind of songs I wrote," he says, "because (a) they didn't have the name Jesus splashed all over them, and (b) they expressed quite a lot of melancholy, sad lyrics, pain and anguish, and about being far away from God - as we often do feel. But then God explained to me that I was a psalmist. He turned me to the book of Psalms, and pointed out to me that the name of Jesus wasn't in there, either, but he's there in every word and every breath.

"I'm a modern-day psalmist. My music is rocky blues, and it's really from my heart. It's not all about 'Oh isn't it a wonderful world' - that always reminds me of that old film Oh What A Lovely War. Some Christians walk around with this jolly attitude of 'I haven't paid the rent this month, all this calamity has befallen me and isn't it marvellous,' but the reality is, it's not jolly, and some people may well be living in denial. I find that expressing things in an open and honest way - as they did in the Psalms -has been very positive and healing. And a lot of people have been touched by the music; some of the songs have been known to bring grown men to tears."

Ian Scott Is Tom Jones
Ian Scott is Tom Jones... and Neil Diamond and Elvis and Sir Cliff just about anyone else he wants to be! Best known to CR festival regulars as lead singer, with the gone-but-not-forgotten After The Fall, Ian dreamed up the idea of becoming a tribute artist whilst on a redundancy-induced sabbatical in the Balearic Islands. 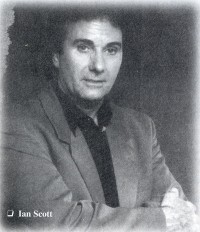 He recalls: "In July of 1995 - after four months of redundancy from the computer firm I used to work for as an analyst -1 went to Menorca and just lay on the beach. I thought: 'I'm not going to do anything. I'm just going to float for a few months and just enjoy life. I'd had a lot of pressure (at the old job). I didn't want to go back into computers - I doubt if I'd get a computing job, anyway.' They offered me another job, but I turned it down. I got out, went and sniffed the air, and looked at the birds in the blue skies for a bit. It was very nice, and I thought: 'Well, what am I going to do for the rest of my life?' I began to think 'I sing in a - rock band, and I can sing anything, because I've got a very high and low voice.' So I started to rehearse, and bought a lot of backing minidiscs and good quality backing tracks. I didn't know what I could sing, so I tried everything-and put a set together. I got bookings after bookings. I just took off like a flame - people wanted me here, there and everywhere. It got to the stage where I had to turn things down. Then I did a top of the bill cabaret, and from then on, it's just lit up. I don't have a Saturday free until next September. "In the middle of all this, I started doing impressions of Tom Jones, Neil Diamond and Roy Orbison. I could do Cliff and Elvis as well, but with Tom and Neil, the vocals are very similar. Most of my tributes are mainly vocal ones. I do look a little like Tom Jones, so I can do him, but when I do, I only sing his ballads -I don't think gyrating like Tom does is a good idea for a Christian singer!

"Someone suggested that I do Stars In Their Eyes, so I sent in a tape, and got an audition as Neil Diamond. I'd planned that if I got on the programme and got anywhere near the end, when Matthew Kelly interviewed me, I'd say: 'It's all right having your heroes and your look-alikes, but the one I most want to be like, Matthew, is Jesus.1 In the auditions, I got to the last 400 out of 80,000, so I knew I was doing something good."

Ian sadly didn't make it into the programme (at the time of writing this, he still hadn't heard from them), but by now was convinced of his ability as a tribute act. So too, was his audience. "I do these tributes now and get paid good money for them. It allows me to do things during the day, because I've got the weeks free. I've been into schools with my pastor; I've done prison work; and if I want to, I can play golf."

In addition to his music, Ian has ventured out into other areas of show business, and during the course of 1997, had a series of small acting parts on the box. These included appearances on the BBC programmes A Respectable Trade, Hetty Wainthropp Investigates and (wait for it) Tom Jones.

"I've got to be honest," says Ian, "I'm fed up of playing in churches to Christians who don't bring non-Christians. We can build Christians up, but I m fed up of going into churches and playing Christian music, and giving the gospel to Christians; they don't really need it. I want to reach the lost. Time's short."

Danny Owen Is Elvis Presley
If there was a 'World's Most Impersonated Singer' title up for grabs, The King would win hands down. Elvis impersonators are everywhere - and these days, they don't so much imitate him as re-create him in their own image. Amongst the different spins on offer, there's a Hispanic one (El Vez), a Chinese one (he runs a restaurant in south London), and even a lesbian one (Elvis Herselvis). Given the real Elvis' religious background, Danny Owen's Elvis Inspirational Concert is probably closer in spirit to the real thing than others.

Danny's showbiz career goes back a long way - back to the tender age of three. "My dad - he's retired now - was a comedian/singer, and I used to get up on stage at summer seasons and that sort of thing, and sing along with him on stage," he recalls. "At the age of 12,1 was a boy chorister at Covent Garden opera house in London, and I left school at 15 to become a singer."