Peter118: The punk band with the "Waiting" radio hit

When Cross Rhythms last wrote about the Stoke-on-Trent-based punk band they'd just amazed many by getting airplay on a major Japanese radio station. Now, three years on, things have taken a further leap forward for the foursome with their split EP with New Jersey's No Lost Cause being favourably received and one track from it, the storming "Waiting", getting played by the legendary radio personality Rodney Bigenheimer (the man credited as the first American DJ to give airplay to the Ramones, Blondie, Guns & Roses and The Sex Pistols). Having just returned from Peter118's US tour, Peter Field (now Peter Szczepanski) fielded some questions.

Tony: You've had various line-up changes since we last interviewed you. What is the current line-up?

Peter: Our current line-up is Peter Szczepanski - guitars and vocals, Janine Szczepanski - bass and vocals, Sam Critchley - drums, Alisha Hope Palmer - guitars and vocals. Janine joined on bass in 2015 when our previous bass player Andrew Derbidge moved to London. Janine had one week to learn the bass for a gig at a youth church, which she did and then joined the band on a full time basis. Sam has been drumming for Peter118 since 2014. Alisha is the newest member of the band and joined three months ago. Alisha is a worship leader at St John's Church in Burslem. We met Alisha through the church and it felt right for her to join Peter118. Alisha recorded vocals on the split EP 'In Stereo'.

Tony: Did Alisha and Sam accompany you on your US tour?

Peter: Unfortunately they could not come out on the tour. We were joined by guitarist Jet Wilson from CPR (Thumper Punk Records) and Kevin Gomez from A Frame (a surf rock band) who joined us on drums for the tour.

Tony: How many gigs did you actually play out there and were they all in California?

Peter: We played four shows, which were all in California, in addition to an acoustic performance for a G Rock TV episode. G Rock TV is an extreme sports and music TV show, which shares the Gospel through alternative TV entertainment.

Peter: Whilst there are Christian punk bands all over the country, I would say that the US Christian punk scene centres around California. There is greater church and record label support which helps the bands and Thumper Punk Records, Sky Burns Black Records, On The Attack Records, Indie Vision Music and previously Screaming Giant Records are all based in California. G Rock TV and Blast TV also give the Christian bands further exposure which encourages support. There are a few Christian punk bands outside of California such as Grave Robber and Flatfoot 56, and alternative labels such Tooth & Nail in Seattle are still thriving of course. However California is Christian punk's epicentre and has strong punk roots dating back to the days when 999 and Sex Pistols toured there in the 1970s. The scene grew.

Tony: How on earth did you get to meet Rodney Bigenheimer and how on earth has he given a play or two to "Waiting"? 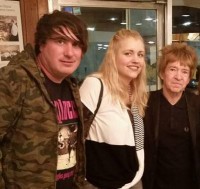 Peter and Janine with Rodney Bigenheimer

Peter: Rodney has been playing our music for over 12 months, previously on KROQ and now his new show on Sirius Xm, Little Stevens Underground Garage. Rodney has played "Waiting" around four times on this show and knew that we were in town so wanted to meet us. Rodney meets a lot of the bands he plays on the radio. Incredibly, getting airplay on his show, which is a secular show based in Hollywood, led to an amazing God moment where we were asked by one of his staff to pray with a friend's daughter who was ill with cancer. So God has really been a part of that journey into the mainstream music industry.

Tony: Tell me something about the recording of your three tracks for 'In Stereo'.

Peter: The 'In Stereo' EP is a more raw sounding recording than our previous pop punk style sound. I wanted an old school, more aggressive punk sound and "Waiting" became a product of this.

Tony: Why are you now known as Peter Szczepanski and how do you pronounce it?

For more on Peter118 visit the Peter118 artist profile