PHIL LAWSON JOHNSTON is one of the most sensitive worship composers in Britain. James Attlee talked to him. 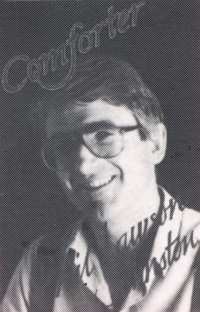 Phil Lawson Johnston has always stood slightly outside the mainstream of worship musicians who've come to prominence in the British church over the past two decades. Known principally through his work with classically-influenced worship group Cloud who took their spirit-filled and intimate worship style out from their base at Holy Trinity, Brompton to churches up and down Britain in the 70s and 80s and, as the author of songs like "We Will Magnify", "Jesus Is King" and "Give Me A Hearing Heart", after 15 years in the worship ministry Johnston remains his own man.

Although London-born Johnston came from a church-going background, it wasn't until he had left school, been to Italy to study Art History and returned to London that he came into contact with what he terms 'real Christianity'. "It was through hearing someone called David Mclnness speak that I first gave my life to the Lord. Having been involved with the drugs scene I went through a period being still involved in it even after I'd become a Christian - it wasn't until about two years later that someone talked to me about the power of the Spirit, and when I asked for that and prayed for that the change really happened."

There followed a year in which Johnston wrote a stream of Christian songs, mostly later discarded, a time of "purging and learning", which ended with Johnston and friends opening a Christian eating place called the Kitchen in west London. There Cloud was formed, and every Sunday night as many as 80 people would gather to worship the Lord. Eventually the group felt the need to belong to a wider fellowship and ended up at St Michael's, Onslow Square, which soon merged with Holy Trinity, Brompton, where they pioneered a then radical form of charismatic worship. "We began to really get stuck in there, particularly the evening service. We must have led worship there for 12 years. When the two churches came together someone had a vision of the gallery being full, which at that stage was far off- but it did happen five years later, with a congregation of around a thousand people. It was an exciting time, discovering new things as we went along, doing our own material but also trying to pick the best from all streams."

The team were particularly influenced by the Vineyard worship leaders - John Wimber visited in 1984, with fairly devastating effect.

"Although all along we had a tendency towards fairly intimate worship as a group, when we came across their stuff it was a stage further on, it added a new dimension. It wasn't just the songs, it was the whole atmosphere of what one was trying to achieve - a real meeting face-to-face with the Lord.

My main aim has always been to lead people into the presence of God and open people's hearts to the Lord through the worship so He can minister to them. What I'm happiest doing and feel most fulfilled in, is seeing people being ministered to during worship - healing and whatever taking place during it. That's my aim.

"I veer personally towards simplicity in worship because if you dress it up too much you distance yourself from people - I'd much rather give people something they want to say from their hearts to the Lord. As worship and praise becomes more high profile there is a danger of it becoming more performance orientated. At Spring Harvest, for example my own feeling was I didn't find there were many times when we actually worshipped - we didn't come face to face with God on too many occasions. We sang a lot about Him, and praised Him and danced and shouted and that's great, but a lot of it is quite a performance, quite controlled, tied down and buttoned up. I suppose to an extent you have to be with five thousand people, but having said that I think one could loosen up a bit and allow God to have more space with songs that are less rigidly structured.

I'm trying to see if I can track down a copy of the 'Mind the Gap' compilation of worship songs produced by Phil Lawson Johnson in the '80s, working with Holy Trinity Brompton. (My original cassette tape is now unplayable, unfortunately.) Can you provide any assistance in getting a recording?

I'm trying to get hold of some copies of the song 'I will change your name' on a CD for my sister. Is that possible?

Ive only just seen these requests and if any happen to read, this I can easily run off CDs of any of the Cloud albums if you contact me. I have also recorded a number of other albums including my latest, My Father, this year, and now available from me or from iTunes etc.

Just seen Phil's offer to do copies of Cloud albums and yes we would love some too. God spoke to me today through the lyrics of on your song certainly Free to Fly, The Promise, Hallowed Ground, The Vine and not sure if there were any others but certainly interested in those too. Many thanks.

Dear Phil,
I was really helped in my twenties while a medical student in London by your Cloud album with the song "Let the high praise of God" and by services at HTB where Cloud led worship. This was in the mid-eighties. Is it possible to obtain a CD of that wonderful album? The music and vocals are so pure. I can recall it now and play it from memory but it would be so nice to hear the album again.

Hello
Is there a link so I can purchase a cds of your albums for my mother. She has them on vinyl and would be a perfect present for her.
Many thanks
Emma

Phil, I heard you sing some years ago at a group meeting in Broad Chalke, Wilts. I bought your CD Worship in the room, Your Presence. Recently I lent it to Christian friends who loved it & I would like to buy two copies if this is possible. With thanks & best wishes, June

I was given the Cloud, The Promise cassette from an Irish believer in 1989/90 who I met attending a Queensway Church in Toronto Canada summer bible camp. The tape is tattered and worn, would love to find a cd or even a newer tape. So much of the modern "Christian" music has no ministry in it. Sad. But God has reserved for himself those who will not bow their knee to Baal.

Are there any early Cloud recordings still available?
I would love to have Free to fly, Watered garden or Hallowed ground, on CD if possible.

Had "Watered Garden" on vinyl for around 40 years. Just transferred it to CD (for private use) so that I can play it more often. Inspired words and music.

I still listen to Cloud on tape "You shall be as a watered garden" has been a theme song in my life. The tape is wearing out and I'd love it on CD

I am trying to get hold of a CD of CLOUD The Promise.
Still listening to the tape, loved it and still loving it.. The tape was given to me by my brother many many years ago.My brother has gone to be with the lord and this tape means so much to me.
I do hope to get a CD incase the tape refuse to play anymore .

I am since 2009 still reading Mr Johnston book "The Song of the fathers heart"and I love it.Part 3 is just beautiful,I've never heard any of his songs I would really like to.

I have two of your CD's "Worship in the Room" Volumes 1 & 2 which we have found very helpful in our small group. Is it still possible to get Volumes 3 & 4 of this CD? Thank you - Doreen