Philippa Hanna: About to tour with superstar Lionel Richie 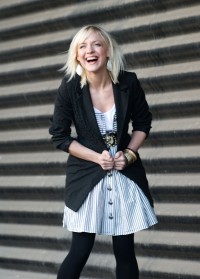 As the majority of Cross Rhythms readers will know, Philippa Hanna is British Christian music's best known female singer. But what may have escaped some fans' attention is that in recent times Philippa has started to attract more and more attention from the mainstream music industry. Now things have moved forward significantly for this most talented of vocalists for on 26th October at Birmingham's LG Arena Philippa will be kicking off a tour as support act for pop soul megastar Lionel Richie. So how has a singer moved from the rather insular confines of Christian music to the attention of the pop industry big time? Explained Philippa, "Things have been progressing steadily for me over the last couple of years, particularly since I started working with the Grammy Award winning songwriter and producer Eliot Kennedy. I've been able to do a few gigs with mainstream artists and at one of those a guy called Nathan, who works in the industry as a tour manager, saw me perform. He was very enthusiastic and one thing led to another and I was invited to do the Lionel Richie Tuskegee Tour."

When the invitation to join the Lionel Richie tour was made, Philippa admitted that she would wander around the house singing "easy like Sunday morning." In fact, when the invitation came through, she sat down at the piano with a friend and sang the Commodores' classic all the way through three times as a means of celebration! The Tuskegee Tour will be the biggest platform so far experienced by Philippa. She said, "I played before a crowd of around 10,000 at the Big Church Day Out event but there will be some venues on Lionel's tour with audiences of 12,000 upwards."

Philippa will be singing six songs acoustically. She is already familiar with the challenges of being a support act working before an audience where the majority of the people have never heard of you. "I'm aware of the support act dynamic," she said. "I've already done gigs with Laura White (of X Factor fame) and Graham Kendrick. I know that my role is to support Lionel and help people get in a positive frame of mind."

Although Philippa's final set list is still to be finalised, one song she will be singing will be "I Am Amazing", the singer's powerful antidote to the fake tan, crash diet, skin deep beauty obsessions of our modern world. "I am really looking forward to singing that song to the audience," she commented. "We're going to be offering the song as a free download so that people who hear it can text a number we'll be giving them and get it. It's an important message that people need to hear - that we are wonderfully and amazingly made by God."

Most Christian artists have to start their careers playing in church halls, sometimes to 10 people. What was the smallest gig Philippa has ever played? She responded, "About two years ago in Sheffield a friend of mine, Grace, asked me to play a concert for eight or nine teenage girls from her church. I really enjoyed it."

Everyone who has heard it is of the same opinion that Philippa's acclaimed live studio mini album, produced by Eliot Kennedy, 'Out Of The Blue', is possibly her best ever work. Did the success of the project mean that her next full length album will be stripped down and with a bluegrass tinge, like 'Out Of The Blue'? She laughed then responded, "It won't be so stripped down but it will be organic and with a strong folk and country flavour. As you know, I've been making music for quite awhile now but it seems that I've finally located a style which is truly me." There are some strong country music connections with Philippa. Her father, Pat Hanna, has been performing country music for many years. Pat, who has been a Christian for two years, will be releasing his debut album at the end of the year.

Philippa concluded our interview by reminiscing about her father, "When I was growing up I remember my dad singing 'Three Times A Lady' around the house. Now I'm touring with the great singer who recorded that song. God moves in mysterious ways!"