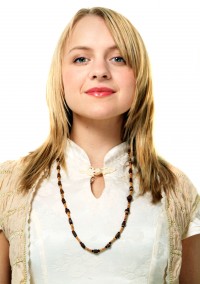 Bubbly British blonde singer/songwriter Philippa Hanna has bounded onto the Christian music scene with her debut album 'Watching Me'. The Northern lass has received a big welcome into the industry with her first release topping the charts of independent online sellers cdbaby, and since signing with Authentic Media in July 2007 she's shared a stage with worship leader Chris Tomlin and Scottish mainstream indie artist Amy MacDonald. We met up at a charity ball gig at Stoke's Trentham Church to chat about everything from her famous family, making mischief, going for God and even finding the right fella, and how music has been a constant through it all.

The Sheffield songbird grew up in quite a musical family. It's generally known that her two second cousins, Danny and Richard, were the core members of rock band Embrace. Her brother Stuart also used to play bass for Jamiroquai and currently plays for mainstream chart-topper Mark Ronson. So it's not surprising that Philippa possesses musical talent too. "I started singing when I was about knee high to a grasshopper," she said. "One of my earliest memories is of me standing in front of my mum and dad singing 'The Greatest Love Of All' by Whitney Houston. . . I'm not sure it was Whitney Houston standard! But it was then that they thought maybe I had some kind of gift perhaps. As I was growing up all I wanted to do was sing; all I wanted to do was be involved in music. It took a bit of a backseat when I was in my troubled teens but it always still there. I always thought, 'You know, some day I'm going to do something in music.'"

Like a lot of British teenagers, Philippa wasn't the most well-behaved young lady and admits to often getting up to the normal tricks and making trouble with her like-minded mates. "I think because I was always a bit different at Primary School, I was always singing and dancing and being an extrovert, I didn't always fit in," she said. "And so when I went to high school I thought, 'Right that's it, no more Miss Nice Girl' and I basically went off the rails just to make friends, like, got in with the wrong crowd." It was obviously a significant part of her life as she even wrote a song about it for her album. "Yes, 'Crazy Days'! It's a song that's sort of saying goodbye to my old life. My best friend through the whole of childhood - my mum and her mum were friends - we grew up together and we went off the rails together. We used to go out clubbing before we were old enough and we just had a crazy lifestyle and got ourselves into all kinds of silly situations. We even ran away for the day once, in our teens, stayed out over night and got picked up by police and taken home. There's a reference to that in the song. We had it cushti really but we wanted to believe we were persecuted and oppressed by our parents. All that, 'They don't understand me' stuff! It's ridiculous. My friend is not a Christian but she's grown into a beautiful young woman and is a mother of two now and she's got a great guy in her life. And I just looked at her and I thought, just thank God that we came through all that. Thank God. And thank God that we're living to move forward. I'm just so grateful that God did those works of protection in my life."

When chatting to Philippa now, its notable how naturally she talks about her relationship with God and how willing she is to talk about the change in her since her crazy days. She didn't grow up in a Christian home, was never taken to church and says she didn't even meet a Christian until she became friends with some people in Preston. "I met a Christian through music," she said. "We became friends and he had just himself become a Christian, so he was kind of going through that transition. It was just so weird to see the change in him! I really didn't think Christianity was something people do unless they were brought up in it. I didn't understand that God could actually meet with you and be real to you. I thought it was just a faith or religion. I was quite interested in spirituality though. I used to read horoscopes and I used to collect crystals and stuff, all that hocus pocus. I felt like there was something spiritual about life but I didn't know God. Anyway, I ended up going to a worship meeting, which I'd never done before. It was completely foreign to me and while I was there I just thought these people are loony tunes! I was just like, 'What's going on!' But then I thought there must be something in it because they're not loony tunes, they're focused, hard-working, amazing people who seem to have it all together. So I prayed. No one asked me to, I didn't go to the front or anything. I just prayed and said, 'Jesus, if you are real then please come into my life and show me that you're real.' I went home that night and went to bed as normal and woke up just feeling different. I felt like I'd met the man of my dreams. I remember getting out my New Testament and Psalms that had been gathering dust on my bookshelf and I read it and the Scriptures just started to come to life. That was the beginning of the journey really." 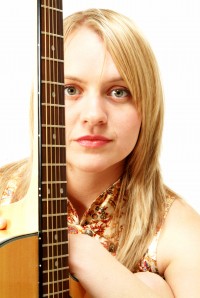 It seems as though a lot has changed for Philippa since that time and the music created for 'Watching Me' is a testimony to what's happened in her life so far. "I was basically building monuments to the journey I was on," she said. "The song 'Watching Me' in particular was about a revelation I had that I was predestined in Christ for works in him. I always used to feel like I had some kind of destiny over my life and I was, at the time, deceived into believing it was to be famous or a star or to have my name in lights. But actually my purpose is to glorify God and to evangelise, that's what I believe my call from God is. And any gifts I have I'm supposed to use for that. So that's where 'Watching Me' came from, just knowing that God's been with me the whole time."

Featured on her Myspace but not on her album is a track called "Mr Right" which was written by Philippa. She explains, "That song I wrote for somebody else. It was about waiting for Mr Right and this girl having a lot of attitude and going out and enjoying herself but never going home with someone randomly, knowing she was waiting for the right person. I just like the song, so I brought it back to life. It actually has got a good Biblical meaning and if you're going to be with anyone, wait for the right guy and marry him."

On the subject of boys there is one certain gentleman in whom Philippa takes a specific interest. Philippa and Joel Cana, drummer of fellow Sheffield-based indie group The Gentlemen, have been together for around two-and-a-half years now. She explained how they first got together: "I was quite good friends with Nick Noble, the lead singer from The Gentlemen, and so we were in the same circle for a while. We knew each other for at least a year before we kind of got together. Joel decided he quite liked me and sent me an email, because he's quite a shy boy. Then he asked me to go out with him for a coffee. And that's how we got together!" So will there be a proposal coming soon? "You'll have to ask him!" she said. "I don't think there's much point going out with anyone if you're not considering marrying them. We'll see what God does."

So with one year as a solo artist behind her the next looks set to be just as busy. Her next project will be to record a new album in the summer. "This next album is going to focus more on what it's like to be in a relationship with God and what life is like; just a really honest account. I want it to be like a resource for us to take into venues and have a great show that will really impact. I can't wait to partner with the great musicians I know to just make something really exciting." As well as that to look forward to, which is due for release in January 2009, Philippa is also soon to be a published author. Her book Watching Me will break down each track on the debut album and tell the testimony behind it. "It's also going to be going into the Scriptures that are in it, because that was kind of something that happened naturally. I didn't ever think, 'Hmm, I'm going to write something on Romans 8!' It was more like what I'd been hearing from preachers and what I'd been reading just kept inspiring me so the themes ended up getting into the songs."

If what's ahead is anything like what has already happened, the coming months are going to be particularly busy. "The last year was great. It was really, really good. It went from everything being a vision to things starting to come to pass and really seeing some fruit in it. One of the great things is that I've found a lot of favour in Sheffield with mainstream venues, with people asking me to play, people inviting me back to play and it's just really exciting. I literally stand in these places and say, 'Yep, Jesus is real and he's changed my life,' and then I sing about it. And they ask me back - they don't pelt me with olives! So, it's obviously God's plan and God's will that we should really be open about our faith. At the moment it's all going well."

I saw this beautiful lady on TBN this morning talking to Cynthia Garrott such a beautiful spirit and her singing is awesome love to see her live. Also she's from my part of the world Sheffield i was born in the next county Nottinghamshire so both northern ladies. God bless you Philippa Hanna xx

Met her and watched her perform in Newcastle. Lovely person...nothing sanctimonious...I liked her song "I'm Amazing."

I have to disagree with Ronetta! Phillipa performed at my Church last night and was absolutely awesome.. Great voice and guitar playing.. and more importantly a a warm, funny, captivating and down-to-earth person. Her inner beauty shone so brightly.
I wish her every success.

She is a bit over-rated-she can at least sing in tune but her voice is so very weedy and faltering-it sounds as if it will conk out at any minute.
I think she is a rip off!

love this lass...beautiful voice, beautiful spirit and fantastic songwriter. this album was on constant cycle in my car CD player til smoke was coming out of the stereo!!! LOL!!! Can't wait for next album...great inspiration for aspiring young female (and male) singer/songwriters!! Good on ya!