Puntin: The emcee making the transition from a 'Christian Rapper' to a 'Life Rapper'

Tony Cummings spoke to the award-winning rapper and producer PUNTIN 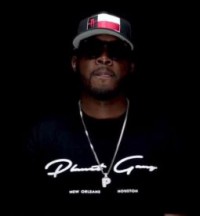 As long-time Cross Rhythms radio listeners will know, Puntin is a rapper from Texas who, in 2015, enjoyed a CR radio hit with "Supernova" from his 'Bananas Vol 4' album. Now the rapper is back with a new album, 'Legacy', so the time seemed appropriate to talk to the emcee. The first thing we asked was, having released an album 'The Paragon' in 2017 under his real name Greg Cooks, why had he now reverted back to the much-loved Puntin? He was quite candid with his explanation.

"It was hard getting everyone to follow the transition. I found that not too many of my followers/supporters even knew that I released an album under Greg Cooks. My team and I even went as far as taking the album down. We plan to re-release it in the near future under the name Puntin."

The rapper explained how he first got the Puntin name. "My mother gave me a nickname; she called me 'Punkin'. As I grew up one of my friends, an older guy, started calling me 'Puntin' then everybody started calling me Puntin. When I began to do music and was looking for a stage name I used G Dog, G Style, G this and G that. Then I decided to use Puntin; it was different, nobody has it."

Puntin actually began his career in rapping when, in 2007, he emerged as the not-very-cool Rap'n Rev through Worldwide Impact Records. Puntin began garnering national attention when he performed at the 2011 BET Music Matters Showcase in Los Angeles, California. On 14th December 2011 Puntin released his first mixtape, 'Champion', which pushed over 5,000 units on hotnewhiphop.com, and over 3,500 units on datpiff. Considering his buzz from 'Champion', Puntin released the first instalment to his mixtape series, 'Bananas 1', on 30th December 2012. The mixtape was downloaded 7,000 times, and viewed over 24,000 times on datpiff. The last three albums to the instalment were downloaded over 30,000 times and became an internet hit.

His independent album release, 'Back To The Basics', came out on 22nd April 2014 and it became his first Christian hip-hop album to chart on the iTunes Hip-Hop/Rap charts. Puntin went on to perform on the same stages as Kirk Franklin, Tye Tribbett, James Fortune and Ludacris. He has toured England, New Zealand and all across the US. Puntin has won the Texas Gospel Rapper Oof Tthe Year award in the Texas Gospel Excellence Awards in 2008, 2010, 2011, 2012, 2013, 2014, and was nominated for 2015. His friend, Bosston, is an artist in his own right who often acts as Puntin's road manager.

Puntin spoke about the soon-to-be-reissued 'The Paragon' album. "I'd always wanted to do an album that wasn't just totally a gospel or Christian rap project. I'd always wanted to do an album that didn't go against my morals, that didn't go against the word of God but something that people outside the Church could understand and comprehend." There were some intriguing guests on 'The Paragon', though as it turns out, Puntin didn't have to travel far to find them. For instance, V Cooks turns out to be Puntin's wife, Victoria.

Now, with 'Legacy', he's back with an impressive set. He says he had "a lot of fun" recording the project. "My previous were recorded at different studios throughout Houston. I recorded all of 'Legacy' myself at my home studio. It was good getting back to recording and producing everything myself. I feel I'm at my best that way. I have more control of the sound that I want to create. I produced, engineered and performed every single track on 'Legacy'. It's personally one of my favourite projects to date."

So what does the future hold for Puntin? "I've made somewhat of a transition from a 'Christian Rapper' to a 'Life Rapper.' I believe God has me in a different season and I'm enjoying the content that I've been producing lately. I'm not only making music that Christians can listen too, but music that unbelievers can also listen to without feeling a certain type of way. I believe in the end, the unbelievers will understand that I'm a believer, and respect that. And only God knows what else may come from that. I've lost a lot of my Christian-based supporters because a lot of them want the hardcore Christian message. I'm cool with that because I'm living what I'm doing and I'm at peace with it. I plan to continue the path that I'm on and hopefully gain enough devoted supporters and listeners to get to where my team and I can construct our own successful tours."

Been jammin to Puntin for a while now. He always finds ways to improve himself in his rap style, more lyrical, able to adjust to the latest sound, while still making dope beats.