Rachael Lampa: The award-winning singer returns with 'All We Need' 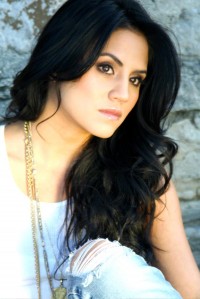 The release in the US on 27th September of the 'All I Need' album by Rachael Lampa brings the singer back into the full glare of publicity. The last time Cross Rhythms spoke to Rachael she'd already achieved more in three short years than most singers manage in a lifetime. Born in Ann Arbor to a Filipino father and a Hungarian/Irish mother she was singing at age four, winning talent contests at 12 and began her recording career at 15. Her Dove Award-winning debut album 'Live For You' produced four number one singles and releases 'Kaleidoscope' (2002) and the remix album 'Blur' sold well. In July 2004 Rachael released a self-titled album recorded with guests like steel guitar virtuoso Robert Randolph and rapper T-Bone. It was an eclectic set taking in pop, acoustic, R&B and even ska and compared with her previous releases it wasn't successful. The singer left Word Records who in 2006 released 'Blessed: The Best Of Rachael Lampa'.

By that time Rachael's career seemed to be slowing down though she did star in a film, Hidden Secrets, sang at the 2008 Republican National Convention, in December 2009 released a Christmas EP and a month later another independent EP, 'Human'. Guesting on the latter project was Grammy Award-winning singer/guitarist Jonny Lang. Later in 2010 Rachael, the award-winning soloist made the surprise move of joining pop R&B hitmaker Jordin Sparks as a backup singer on Sparks' tours with the Jonas Brothers and Britney Spears. Rachael explained her softly softly return to the solo spotlight. "I kept the team really small and purposefully boxed people out because I was scared to jump back into the world of labels and expectations. I did [the independent releases] for existing fans - I really only promoted it on Facebook and Twitter. I also got married shortly thereafter and that helped me to really get in touch with who I am: a daughter, a sister, a wife and a child of God who happens to love singing and music in general. At that moment, I realised I was ready to let people be part of that again."

When Lampa was ready to get back into the studio for an internationally released album, she partnered with management company Black Fuel Music (home to Word/Warner's Group 1 Crew, Arrow Records artist Shonlock and Tooth & Nail/EMI's Hyland and Ryan Stevenson) and settled on Universal Music Group for the release of her upcoming project.

"My new team is nothing but supportive of my vision and they're working to make sure my new music reaches as many people as possible," said Rachael. "They get what I'm doing and I get it now as well. I understand the privilege and the power of making music and I'm enjoying every minute of it this time around. Expressing myself doesn't just make me feel free in my music, but also free in my faith and life in general, it's all an intertwined journey."

While her recent indie releases experimented with a more acoustic sound, 'All We Need' includes plenty of the pop sensibility for which Lampa first rose to fame. Her press release described the sound of 'All We Need' as "wrapped around tasteful traces of R&B, soul and rock, listeners are sure to draw comparisons to soulful artists ranging from Stevie Wonder and Lauryn Hill to Alicia Keys, Adele and Natasha Bedingfield."

One highlight of the album is "100," co-written with her husband Brendan McCarthy and longtime friend and fellow artist Ginny Owens. Another is the ballad "Feel" which explores the emotional differences between men and women. Said Rachael, "This record is really just a reflection of my life and where I've been since you last heard from me. Lyrically, there's a thread of simplifying life instead of cluttering it. I'm one of those people who used to try pleasing too many people, only being able to give everyone 10 per cent instead of 100 per cent. Now my goal is to be an amazing friend to a few people instead of a lesser friend to a lot of people. There's a lot about letting the people I love know that I love them and talking about the things I believe."

The first single from 'All We Need' is "Remedy" which speaks of a diet of Jesus, family and friends as being the ultimate medicine for the pains and pressures of life. This autumn Rachael will be touring the US with Group 1 Crew, Shonlock and Rapture Ruckus on the Outta Space Love Tour.

After all the ups and downs of the past the Nashville-based singer is philosophical about past mistakes. "I found myself starting to wrap my identity in my music instead of in Christ. If something didn't go well career wise, then I started to link that to who I was and what I was doing wrong. Being off the merry-go-round helped me invest in relationships and build a sense of community that I was starting to lose."

Today Rachael is at peace about what the future may hold. "I try not to think too hard about the long road ahead, I just want to enjoy the ride this time. I'm just ready to take it all in, live in the present and hope it all leads to fun opportunities and life experiences."