Randall Goodgame: The singer songwriter with a thing about slugs and bugs 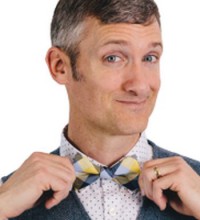 Of all the hundreds of singer/songwriters currently working in the demanding field of children's music, the one who unquestionably has the best name, and one that he was born with and didn't have to come up with a cheesy moniker like Gordon Goodnews or some such, is Randall Goodgame. As well as having such a child-friendly name, Randall also has considerable music credibility, being a long-time musical associate of the critically acclaimed songsmith Andrew Peterson. Randall's latest album, 'Sing The Bible With Slugs & Bugs 3', is selling well as he tours the USA with his witty and thought-provoking songs. He managed, though, to find time to talk to Cross Rhythms about his life in music.

Born Randall Kilpatrick Goodgame on 15th February 1974, by the time he was nine years old, he'd begun taking piano lessons with his older brother and younger sister. By 15 he was studying under blind Brazilian pianist Manfredo Fest and while in high school was performing in the jazz band of his high school in Clearwater, Florida. He studied music and biology at Birmingham-Southern College, and later, on weekends and vacations from college, was the keyboardist for Southern rock unit, Black Creek Band, who released an album 'Live From Gainsville' during his tenure.

In December 1995, Goodgame released his first album, 'Randall Goodgame'. Apart from one track, a cover of Bob Dylan's "I'll Be Your Baby Tonight", all the songs were composed by Randall, who as well as playing piano on the project, played acoustic guitar, harmonica, accordion and mandolin. Writing in Nashville's influential MusicRow publication, Robert K Oermann called Goodgame "the folkie find of the day" and his album "a superb self-made CD that's full of memorable melodies, stirring production, ear-catching lyrics and personable vocal." Said Randall, "I'm a big Bob Dylan fan and I grew up listening to all that stuff." By 1996 the Randall Goodgame Band had formed and he played a major festival in Augusta in 2000. Also in 2000 he recorded the album 'Arkadelphia', four years later the 'War And Peace' album, and four years after that, the 'Bluebird' EP.

Goodgame eventually began writing songs for contemporary Christian artists such as Caedmon's Call, Chris Rice and Jason Gray and in 2001 opened for Andrew Peterson. Two years later, he joined Caedmon's Call and Jars Of Clay on tour and ended up writing seven songs on Caedmon's Call's 2004 album, 'Share The Well'. It was to be three years later that a major switch in Goodgame's career came when he collaborated with Peterson in recording and releasing a children's album, 'Slugs & Bugs & Lullabies'.

I asked Randall to tell me about the insect connection. "I came up with the name years and years ago from a lyric from one of our silly songs that says 'God made slugs and bugs and rats and bats and nasty bees that don't say please and will sting your elbows and your knees if you chase them'. So I came up with the title, the name 'Slugs & Bugs' from that CD just because it was fun and it rhymed. Today, those slugs and bugs have characters that are part of our animation and our videos; all the CDs have characters on them. We have a TV programme coming out later this year that will have some of these characters, the slug and the bug, it's Doug the slug and Sparky the lightening bug. I'm writing picture books." 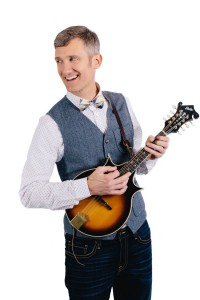 The popularity of the 'Slugs & Bugs & Lullabies' album led to Goodgame being invited to compose songs for the hugely popular cartoon series, VeggieTales. Commented Randall, "We raised our kids on those great silly songs, 'Where's My Hairbrush?', 'Cheeseburger' and all of that stuff. But when they came calling, it was a huge honour. Andrew and I were just so excited but I can say that they did come out with a collection of the most popular silly songs of all time. We wrote the number one song, 'Monkey. . .If it doesn't have a tail then it's not a monkey', Andrew and I did."

Goodgame came up with a 'Slugs & Bugs Christmas' in 2010 and 'Slugs & Bugs Under Where?' in 2011. He even released a 'Slugs & Bugs'-themed curricular for Vacation Bible School. In April 2015, Parents Life magazine reviewed Goodgame's 'Sing The Bible With Slugs & Bugs', saying it "possesses a high-quality artistic sensibility that few children's CDs maintain", adding that the songs would "have children memorising Scripture in no time." The album was nominated for Children's Music Album of the Year at the Dove Awards in 2015.

'Sing The Bible With Slugs & Bugs 2' was released in 2016, and now volume three is out and selling. Said Randall, "It's been super exciting this new record, having all these fantastic artists joining in. On the very first track, one of my all-time favourite singer/songwriter artists, Sara Groves, is on with me and it's two verses, one from 'Hebrews' and one from 'Cautions', the passage about Jesus, 'he is the image of the invisible God' verse four of Creation. One unique element to this record is that all the Scripture verses are either the words Jesus spoke or passages that are about him or his life and his work. All the records have themes, this one is the life and words of Jesus. Some of the other artists on there are Mike Weaver, from Big Daddy Weave, he sings on the passage from John. Bart Millard, he's the lead singer of MercyMe, and of course there was just the movie that came out about him, he sings all the parts on the passage from Matthew, 'men shall not live by bread alone but by every word that comes from the mouth of God'. He is amazing on it, his voice is a wonder to behold. Then there's another guy, Propaganda, who's a hip-hop artist from California that just does a brilliant job. One of the fun things about doing music for children is that people, who doesn't want to do something great for kids? So generally when I'm asking around if people are open, if their schedule is open, if they've got time, if they're in town, a lot of time they are game to join in. It really makes it feel less like my record and more like the Kingdom, the body of Christ, celebrating Scripture and providing something for families to listen to."

I asked this most gifted of songwriters whether he felt that, now that he's continuing to get huge demands for his children's ministry, everything else has to go on hold. He responded, "Well, you could put it that way although really it's kind of gone the other way around where I felt such a deep and resonate calling from the Lord to do it that I have just not felt compelled to do anything else. Once I started along this road it just fit me like a glove. I endeavour to try to be excellent with my craft, which sometimes in the area of providing resources for children, children's resources have never been accused of being the most excellent, as far as artistically."

One of the significant things about Randall's songs is that they often resonate with adults as well as children. He explained, "When I see how the Gospel has impacted my own family, it feels like the Lord has given me a real sense of calling for communicating the joy and the love and the truth of the Gospel to families. So when I show up at a concert I'm praying ahead of time for the parents and the kids, thinking about what the Lord might have in store for them and however he sees fit to use me. Whether it's that everything goes great and all the technology works and it's a huge packed crowd, or the light bulb in the projector blows and everything goes crazy, kids are running all over the place. Whatever the Lord has in store for that moment I trust he's got me there for his pleasure and I just try to use my gifts for his glory."

I spoke to Randall about the ongoing debate about whether Christian communicators can be truly creative and not try to shoehorn John 3:16 into every song. Responded the songsmith, "I have grappled with that my whole career. As an artist, I do feel a real sense that I'm at my best when I'm not trying to be propaganda for the Gospel, but I am trying to express the truth about God as he is to me in as artistic and creative a way as I can. But also part of your job as an artist is to serve the listener. It's never to just about you. An artist is never just a servant, so if you are the kind of artist that is called to serve the Church, then by the nature of that roll you should fashion your work to serve them. Now, what I think artists get in trouble with is they may want to play in churches but they don't really want to serve the way that churches want to hear it. I think those can be right, artists can be trying to be authentic artists in their own way and churches can say 'we don't want that'. What I think often churches miss out on though is, if churches are only looking for things that they've already experienced, they're only looking for the cookie platter kind of, it ticks all the boxes, then they might not get challenged or encouraged in the ways that true artistry can challenge and encourage. I think that the Lord has given artists particular callings to speak in ways that the lay person often isn't able to, that's what makes them artists. There's a responsibility on both sides to listen to the Lord and to not be afraid. The artist must not be afraid to serve the Church in a way that is thoughtful towards them and churches must also not be afraid to listen to something that maybe hasn't traditionally fit in the mould they have experienced in the past."