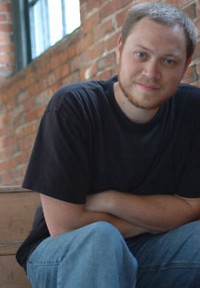 Not many ordinary family men can claim to have recorded eight albums, performed on tour with Caedman's Call and Nichole Nordeman and written the first in a series of children's fantasy novels. But then Nashville-based Andrew Peterson is no ordinary dad. Best known in the UK for his 'Carried Along' album debut of 2000, the acoustic-based songsmith now has a children's book The Ballad Of Matthew's Begats out in the US. Based on the lyrics of a song from Peterson's Christmas album tracing the genealogy of Jesus, the book has been enthusiastically received Stateside. There is a heavier literary work due to be published in the US in the new year. He spoke to Infuze magazine about his new work On The Edge Of The Dark Sea Of Darkness. "This is the first of what will probably be a trilogy," he said, "in which we discover that Darth Vader was Frodo's father, and that Tumnus was Gurgi's best friend while they studied at Hogwart's under Morpheus and Count Olaf! . . . I'm holding out for movie rights."

Andrew clearly has a healthy sense of humour. He has been working on the book for four or five years now. "I've been really bashful about it, but finally mustered the guts to take it seriously and was blessed to find a publisher for it [at] Waterbrook Press/Random House," he said. "I've loved books for even longer than I've loved music, so I'm still freaked out that I'm actually publishing one." But up until this point in his career, Peterson has been writing and performing songs on his acoustic guitar "as a frail and simple gift to God" for 17 years. He described his style as "folk music in the literal sense, meaning that it's music for the common people. It's not too lofty, artsy or hard to understand."

In 1996 he and his wife, Jamie, met guitarist Gabe Scott and the group went on the road together across America. From the beginning Andrew said that "if I wanted to play music, then I should make myself available to whomever wanted to listen." The threesome performed to audiences from elementary school kids to the elderly. "We didn't have the advantage of a CD that people could take home and look over the lyrics and figure out the songs," Andrew explained. "So, when I write a song, I have to make it clear because the audience is only going to hear the song one time until we see them again in six months."

Then, one destined day, lead guitarist and songwriter for Caedman's Call, Derek Webb, came across Andrew's website. Derek was so impressed with Andrew's lyrics that Derek spontaneously invited him to open for Caedmon's Call at an upcoming show. No one else in Caedman's Call had heard a single note of Andrew's songs until he started to play that night. They were so impressed that the band turned down appeals from numerous major-label artists to place Andrew on their nationwide 1998 tour.

In the spring of 1999 Andrew signed with Essential/Watershed Records. His first album, 'Carried Along', debuted in the Top 10 on both SoundScan Christian Adult Contemporary Albums Chart and Billboard's Top Internet Sales ahead of Sting and Faith Hill. It also made an impact on CCM Magazine who named it in their top 10 albums of 2000. Andrew's country-tinged acoustic pop music kept to the simplicity of his unsigned days on the road, but is by no means shallow. "Honesty, truth and art all rolled into one thing is a rarity," said Peterson. "To me, the pinnacle of what makes a good song is something that everyone can relate to, and at the same time, it's beautiful. Making it beautiful is the hardest part. There are a lot of honest and true songs that are just lousy."

Andrew's second album, 'Clear To Venus', was released on the infamous September 11, 2001. The songsmith spent the following several months performing church concerts in the hope of bringing light to a hurting nation. During that time Andrew's wife decided to stay at home with the couple's three sons while Andrew toured. Gabe also went off to explore other avenues after five years of backing Andrew on guitar and vocals. Then one weekend, the singer/songwriter retreated for a weekend to the hills of Kentucky where he found inspiration for his third album while reflecting in the gardens of a monastery. 'Love & Thunder' is "peppered" with reflection of the previous year as "the theme of suffering, the long, hard journey of faithfulness, and ultimately redemption in the depths of our pain kind of crept out during the making of the album." It was recorded with a number of accomplished talents such as Alison Krauss, Cliff Young (Caedman's Call) and Randall Goodgame and was produced by Dove Award winning Christian music veteran, Steve Hindalong.

Since 2004, Andrew Peterson has recorded five albums; 'Behold The Lamb Of God', 'The Far Country', 'Appendix A: Bootlegs And B-Sides', 'Slugs Bugs And Lullabies' and 'Appendix M: Media/Music/Movies'. By the title it's easy to guess that the fourth in the list was Andrew's first move toward the children's genre. Two of the songs from the album were even used for the newest video in the best-selling Veggie Tales series called 'The Wizard Of Ha's'. He teamed up with Randall Goodgame on the 2006 record. "I've never made a record where I laughed so much," said Andrew. "The studio is usually a place of precision and jaw-clenching effort. You can spend a whole day on one guitar part - for some of us, two whole days. But with this record, the bulk of the recording was done in a week. A lot of the parts are results of spontaneity, like the 'yo-ho-ho's' in 'Dreams' and the big band-type background vocals in 'The Post Office Song'. We had a ball."
Despite the obvious changes in this album compared with his others, Andrew explained that the target audience is the same fan base he's always had. "A big chunk of it is parents - people in roughly the same place in life as Randy and I. We both know what it's like to drive around in the car with screaming or laughing kids, forcing ourselves to play that annoying children's record one more time. We wanted to make a record that might be easier for the parents to endure. I hope we pulled it off."
Andrew's creativity is greatly affected by his perspective of the ultimate Creator making us in his image. "Pardon me whilst I geek out for a minute and mention a little known author named J R R Tolkien. He wrote a monumental essay that partly dealt with creation called On Fairy-Stories. He coined the word 'sub-creation' and pointed out the God-given urge we humans have to create; since we have been created in the image of a creative God, we also were made to and find satisfaction in creating, whether by painting or spinning tales or making music or cooking cheesburger pie. I see songwriting and storytelling as a remarkable gift - a tiny glimpse into the satisfaction, the care and labour, and ultimately the delight our God had in making us and our world. My first novel is a fantasy-adventure story, and I got to experience that sub-creator's delight in a new way when I saw the characters I created coming to life on the page, doing things and saying things I wasn't expecting, living in a world whose rules I dreamed up. Who knows the mind of our God? Who can fathom what it's like for him to reign over a world that he made, a world moving forward in time, occupying actual space, peopled with humans with free will? Writing this book gave me a new, humbling understanding of God's power and goodness."

The novel, On The Edge Of The Dark Sea Of Darkness, about which Peterson is very excited, is due out in March 2008. "It's about three kids in a sleepy town that's crawling with snaky soldiers called the Fangs of Drang, not to mention the dreaded toothy cows or the marginally sane Peet the Sock Man, who wears socks up to his elbows and speaks mostly gibberish. The kids uncover a secret in their town that just might kill them dead. Sounds fun, eh? It's got a crusty old pirate, a haunted manor, a maggotloaf, sword fights, and three brave siblings who may or may not have been inspired by my own children. The rest of the series is a Big Fat Secret. I haven't even told my editor yet. Just know this: there are no talking lions. Just danger, mystery, and the loathsome toothy cows of Glipwood Forest. Watch out."