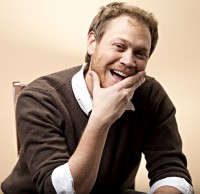 On 30th March Centricity Music are releasing one of the most eagerly awaited albums, 'Resurrection Letters Vol 1' by singer, songwriter and author Andrew Peterson and as a precursor to that has already issued an EP 'Resurrection Letters: Prologue'. Both his 2012 release 'Light For The Lost Boy' and his 2015 set 'The Burning Edge Of Dawn' have been critically acclaimed (Including 10 square reviews in Cross Rhythms) and sow the Nashville-based songsmith to be one of the most talented crafters of songs in the whole of the music world.

About the evolution of 'Resurrection Letters' Peterson wrote on the Rabbit Room website, "10 years ago I had a crazy idea. I was in the studio working on an album that was, more or less, about the resurrection of Jesus. This was due in part to a fresh reading of C S Lewis's The Great Divorce and a first reading of N T Wright's Surprised By Hope. Album titles are tricky, and I happen to think that finding the right one is crucial - something that ties together all the lyrics and evokes the proper vibe for the sound of the record - so when I noticed the songs were unified thematically by the resurrection, I mentioned it online somewhere. A listener in Oklahoma named Tim posted a comment that said, 'Really looking forward to these resurrection letters, Andrew.' Thus, an album title was born. High five, Tim.

"Once we started really digging into the songs, though, I had the feeling that they were more about the way Jesus's resurrection plays itself out in our lives rather than the resurrection itself. What if, I thought, this was part two of a larger work, and part one was specifically about Jesus rising again? Since we were already entrenched in that album and I couldn't exactly stop everything and write a bunch of songs about the greatest moment in the history of the universe, I hatched the dubious plan to stay the course but title it 'Resurrection Letters, Vol 2'. 'It's weird, so it's great for marketing,' I told the label, and bless their hearts they went with it.

"So I found myself for the next few years explaining again and again why there was no volume one. By then I realised my folly. Not only was it a weird idea, partly inspired by George Lucas's Star Wars prequel stunt, but it set up high expectations for volume one. And then, of course, I remembered that things didn't exactly go so well for the Star Wars franchise and the awful prequels we all love to hate. I was genuinely worried that my own prequel would be the Phantom Menace of my career. Not only that, there was the daunting prospect of writing a body of songs about the Christ's resurrection - daunting mainly because I didn't have a clear sense of how to go about it. Should it be narrative, like 'Behold The Lamb Of God'? Should it be avant garde, like an artsy Bon Iver record? Or should it be a bunch of corporate worship songs about Easter? All that to say, I found a lot of good reasons to put it off, and released a few books and four albums between the release of volume two and now.

"Listeners asked me again and again about volume one, and I would wince every time. Honestly, as the centrality of the resurrection became clearer and clearer to me, from a theological standpoint, the less I felt up to the task. If God gave me any talent as a writer, it was ultimately for the purpose of bringing him glory, of drawing attention to his goodness and his gospel, for the building of his kingdom. That can flesh itself out in many ways, vocationally speaking, but for me it means writing the kind of songs I've always written - wannabe mashups of Rich Mullins and James Taylor, with a bit of Paul Simon, Toad The Wet Sprocket and Marc Cohn thrown in. The birth of Jesus as 'the Lamb of God who takes away the sin of the world' is of utmost importance, and I did my best to write about that with the 'Behold The Lamb Of God' album - but it's only part of the story. The gospel, after all, isn't just about the birth and death of Jesus - it's also about his victory over death and his promise to return. For the early Christians, the resurrection was central to the story. And it's no overstatement that if Jesus didn't rise from the grave then there would be no Christianity. But again and again the apostles staked their lives on this crazy fact: their friend had been tortured, murdered and buried, and then one day he showed up again in the flesh, complete with the scars to prove it. How can you explain the birth and propagation of the church apart from this fact? Why would these people have been willing to die unless they had seen, in the flesh, the defeat of death in the resurrection of Jesus? I can think of no other satisfying answer than this: it happened. And if it happened, I must do my best to write about it. 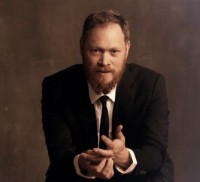 "Sooner or later, I had to step up to the plate and take a swing. Earlier this year, with fear and trembling, I told the label it was time. We put it on the calendar, thereby imposing that great and terrible motivator called 'a deadline'. We secured my old pal Ben Shive as the producer, which was fitting since he was also at the helm of volume two. And then time marched me inexorably closer to the first day in the studio, in October of 2017.

"My last two albums, 'Light For The Lost Boy' and 'The Burning Edge Of Dawn', were autobiographical, dealing in large part with a long, dark journey into - and just barely out of - what was a three-year depression. They're not sad albums, necessarily, but they're heavy. Having survived that valley, I was ready to stand in the sunlight on the opposing hill and sing out with joy to the God who had carried me through. It's not as if everything is groovy all the time now, but as far as I can tell, that particular gauntlet has been run. That winter is over. My depression (or whatever it was) didn't really end in an obvious, definable way, but one day I realised I was talking about it in the past tense. I've been aching for songs that reflected my own resurrection from that season of death, good and beautiful and necessary though it was. In that sense, I'm glad it took 10 years to write this album, because I understand the resurrection better now, and long for it more than ever. My dream for 'Resurrection Letters, Vol. 1' is that it would be the kind of record people turned up to 11 on Easter Sunday, when the world gets its first blush of spring after the long winter, when the cherry trees are in blossom and daffodils are bursting from the ground and Christians all over the world celebrate something that happened - it really happened - two millennia ago.

"But again and again the apostles staked their lives on this crazy fact: their friend had been tortured, murdered, and buried, and then one day he showed up again in the flesh, complete with the scars to prove it. But it felt odd writing about Christ's victory over death without spending at least some time on his death itself. That led to the idea of Resurrection Letters: Prologue, which is - let's face it - a prequel to the prequel. (I can already hear the jokes about me waiting another 10 years to release a prequel to the prequel to the prequel, called 'Resurrection Letters: Title Page and Contents'.) In the spirit of Lent, the season of fasting that precedes Easter, we put together 'Prologue', a collection of five songs that take us from the last words of Jesus on the cross to his interment in the tomb. And then comes the long wait for Sunday morning.

"My hope is that the listener would use those five songs during Lent and Holy Week to dwell on the terrible road Jesus had to walk in order to conquer not just sin, but the grave. My hope is that they would defer listening to volume one until the breaking of the dawn on Easter Sunday - and then that they would sing them out at the top of their lungs, loudly enough that the world would wonder what all the fuss is about. The hope proclaimed by Scripture is that Jesus, now at the right hand of the Father, is making all things new, and that includes you and me and all of creation. My hope is that these songs, however they're used, would wake up a bright longing in peoples' hearts for the coming kingdom, for our resurrection, prefigured in Christ's.

"This is our hope, and I'm still surprised by it. The stories are true."