Red Fist Revolution: We get the lowdown on an exciting new "4-D rock opera" 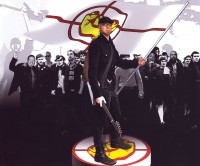 Regular Cross Rhythms readers who've already been grooving to the turbulent, System Of A Down-style "The Bomb" by Red Fist Revolution will already be aware of the launch of an exciting new act, though, as so often happens, singer/songwriter and multi-musician Ben Stewart - the man behind Red Fist Revolution - is no wet-behind-the-ears newcomer. In fact Ben, otherwise known as Trooper Chrysalis, is an experienced journeyman from the Californian rock scene. Before Red Fist Revolution Ben had been a member of the band Conspiracy Of Thought, a Californian band who'd clocked up seven albums, toured the US and had shared the stage with acts like Bad Religion, Kings X, Stavesacre and even a fledgling Linkin Park (back in their Hollywood club days).

Ben/Trooper explained how Red Fist Revolution's stunning 'The Fall Of Goliath' gradually took shape. "The chapter in my life titled Conspiracy Of Thought was coming to an end in 2010. I had been through quite a trial during that period. It was a time of intense spiritual warfare. In 2007 I purchased a '06 iMac computer, but it wasn't until 2009 that I started using the GarageBand programme. In 2010, as COT was ebbing, I started recording demo pieces. They were filled with the spiritual and physical struggles I was experiencing. Simultaneously, a friend and COT road-crew member, Tim Wilkinson, was in the process of taking music production classes. He needed a guinea-pig for a couple of recording sessions, to put some songwriting principles into practice, and asked if I was willing. I had just recorded the first version of 'Down In The Valley' (the opening song on 'The Fall Of Goliath') and said that he could use it as a test subject. Tim came over to my house and together we took the song apart and rebuilt it using his class' principles. The results were palpable, the song was better then it had been. I got excited. Tim got excited. He went home that afternoon and the next day I wrote and recorded 'The Bomb', emailed it to him, and the rest is history. Tim saw a theme in the music early on and as an aside said that it would be cool to create a concept album. Over the next week I wrote the Trooper Chrysalis blogs (http://redfistrevolution.blogspot.com/) and the broadcast scripts for the Goliath Global Network (http://www.youtube.com/redfistrevolution). The Red Fist Revolution was born. We tried to link a David and Goliath story to current events and a deeper spiritual journey. This was about nine months before The Arab Spring in Tunisia, Egypt, and beyond. The Lord was most definitely leading us in a prophetic direction... The entire album was recorded at my house, with my '06 iMac, a Shure SM58 microphone, and using GarageBand software. We took a very White Stripes approach to the recording process and had a total blast. When the principle tracking was finished Tim and I took the recordings to Love Juice Recoding Facility in Riverside, California, for mixing with Dave Swanson."

Amongst the several extraordinary tracks on 'The Fall Of Goliath' is "The Bomb" with its hypnotic hook, "The bomb.you love it, the bomb.you love it, the bomb.you love it 'cause it makes you feel good." Trooper Chrysalis spoke about this most unusual of Cross Rhythms turntable hits. "Tim and I had talked about creating catchy repetitive choruses and at the time I was going through a retrospective Oingo Boingo faze. We were talking about double-entendre in music and I thought it would be interesting to use the phrase 'The Bomb', meaning a weapon of mass destruction, but in the common vernacular it meant something was 'cool'. Well, there's nothing more uncool than bombs in general, so I thought that was perfect. I linked the idea of the Cold War struggle against Soviet expansionism, and the US strategical defensive plan (the Single Integrated Operational Plan: SIOPs), to what we see in modern guerrilla warfare. I wanted the song to have a Love and Hate perspective. We love the bomb: the thing that 'keeps us safe,' and yet we hate the bomb: the thing that brings wanton, non-discriminatory, unbiased, death. Christ's words on the cross, 'Forgive them, for they know not what they do,' really fit. In the story this is the point where Chrysalis begins to realise that he has PTSD from the struggle against Goliath, and that he has become obsessed with the struggle itself."

Another equally powerful track on the concept album is "30 Pieces". Said the musician/songwriter/producer, "'30 Pieces' is the point in which Trooper Chrysalis is turned over to the Goliath Martial Police (GMP) by 'friends' within the rebellion. The song oozes Scripture: I Corinthians 3:12-13 (when we are persecuted we answer kindly), Luke 6:29 (turn the other cheek), Isaiah 53:7 (lamb to the slaughter), Matthew 26:15 (30 pieces of silver)... Trooper is struggling with how to respond to his betrayal with some kind of dignity. He wants to hate them, but at the same time he can understand their fear and desperation. It's a hard, hard thing to 'Love your enemy,' especially when that enemy was a friend. From a personal perspective '30 Pieces' was a song about my own life's trial. Someone close to me had done some things to undermine my personal and professional life, some of them publicly. They made some pretty savage attacks. I was reeling from the blows, but my wife, friends and church all encouraged me to be an example of Christ. It was one of the hardest things I've ever done... and I had it easy. True persecution is so much worse."

One track on 'The Fall Of Goliath' is particularly close to Ben's heart. "'Marching To Valhalla' is particularly meaningful to me. On April 21st, 2010, my grandmother died. I had only been working with Tim on the project for a couple weeks. On the night of her death, after our family had gathered at her bedside, I went home and wrote a poem... 'She's waging war on bended knees/Eyes shut tight to the Summer breeze/Her heart is an ocean, open wide/This Autumn leave takes flight/Marching to Valhalla, marching to Valhalla/Marching through, you're comin' home.'

"The theme and concepts were perfect for 'The Fall Of Goliath'. Tim and I had talked a lot about what happens to Trooper Chrysalis after Goliath, and we really liked the idea of him fading. In the CD booklet Trooper writes, 'We have fought the good fight. We are on our last march.' The struggle against Goliath was a war, and Chrysalis had become a warrior of prayer, of self-sacrifice and a walker-in-the-way of Christ. It made sense that he would march to where the warriors go... Valhalla. In the last song, 'New Jerusalem', we give a glimpse of 'Valhalla' as described in Revelation 20:4, 21 (no more death, and streets of gold). In honour of my grandmother we left the lyrics as 'she' instead of 'he' for Trooper Chrysalis, but I think it still works. She was a warrior of prayer herself, and a picture of grace. If only I could do so well..."

Almost as impressive as the eclectic soundscapes of 'The Fall Of Goliath' which on individual tracks takes in influences like Muse and Nine Inch Nails yet, in the words of HM magazine, "is bouncing around between styles, with guitars, pianos, synthesizers and loops," is the arrestingly designed sleeve. Explained Ben, "I have worked for years with a brilliant graphic artist, Brian Norwood. In September 2010 Brian and I started meeting to create the imagery for the Red Fist Revolution. Brian saw a bigger picture with the concept of the artwork for the album, and like Tim, he suggested that because the album was a concept/story the art should follow suit. After the first day's meeting we had the flag of the RFR created. When we got together a week later I had drawn-up a series of crude sketches following the story and songs. We cobbled the blogs of Trooper Chrysalis into the idea of the artwork, and those sketches slowly came to fruition. There are a few hidden messages in art and text for those who look carefully; lyrical references made visual, and scriptural references (both in the art and the videos). This art explosion has worked into all the aspects of the rock opera; from costumes, to actual flags for both Goliath and the RFR, to the graphics of the Goliath Global Network. The minutiae became extreme. The videos, story and artwork for the album all started flowing together. We made sure that Chrysalis was in the same clothes during the filming as he was in the graphic booklet, and as he is in the live version of the show (just like a movie or musical). Brian and I worked once a week for five months straight to create it all. It was a blast..."

Considering the hugely ambitious nature of 'The Downfall Of Goliath' and the conservative nature of US Christian radio stations media response to the album has been excellent since its release on Florida's YoungSide Records. Commented Ben, "We ran 'Down In The Valley' as the first single, but stations have been cherry-picking their favourites. 'Downing Again', 'Class War' and 'Valhalla' have all received play. The reviews have also been surprisingly good."

One thing Trooper Chrysalis is keen to emphasise is that it is much more than an album. He enthused, "We are a fully 4-D rock opera incorporating video screens, acting and live music. We take our audience on a journey of struggle with Trooper Chrysalis and emerge triumphant on the other side. Our first full performances of The Fall Of Goliath are scheduled for the end of October. We're hoping to take the RFR on the road for summer festivals in 2012, and eventually to Europe."

The final words from this rock visionary closed our talk together. "Just like a person can't divorce themselves from the world of political reality we live in, neither can we divorce ourselves from the spiritual world we are a part of. As Paul says, 'Christ is all, and is in all.' I think it's humorous that the two subjects people want to avoid most are religion and politics. Yet it's those two subjects that engulf the vast majority of our lives in this mortal coil. We cannot escape them. Best to embrace them and try to reflect Christ in our actions as we walk through them."