Reliance: A playlisted EP from a Southern California punk band. . .from Arizona 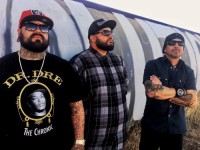 When it comes to radio play, the truth is that few stations will give any exposure to independent releases. Maybe a local station will give a play or two to a local band who've gone to all the time and trouble to release a single, EP or album, but to get further than that is beyond the capabilities of most independent artists, even when they've released something of top quality every bit as good as big budget record label releases. Cross Rhythms is one of the few radio stations, Christian or non-Christian, prepared to audition for possible play every independent release it receives (subject, of course, to an artist's style of music falling within our format).

In view of this, the punk/modern rock band Reliance, from Arizona, have recently achieved a milestone in their short life by having their EP 'Crashing Down' selected for airplay on all four of Cross Rhythms' radio stations. And their achievement becomes even more impressive in that not one but FOUR tracks from the EP have received or will be receiving Cross Rhythms play. Clearly, the time has now arrived to tell Cross Rhythms' readers about one of the best unsigned acts it has encountered for years. With this in mind, I spoke to the band's drummer, Matthew Clark, and guitarist, Albert Padilla.

Tony: Can one of you tell me all about the band?

Matthew: Albert and I met years ago when my wife Christine and I started an indoor skate park out here in Prescott, Arizona - just reaching youth, making a positive impact, a difference in their lives, sharing Jesus with them. We ended up running into Albert at the local mall. He was introduced by one of my friends, Jimmy Collins, and I heard that he was a really good guitar-player, very talented, and had an awesome relationship with God. I started talking with him: 'Why don't you come on out to the skate park? These kids are amazing, they're full of fun.' I told Albert, 'Come on in, and maybe you can start doing worship for the kids? Give it a heavy edge and it'll impact the lives of the youth.' Albert was like, 'Yeah, let me see about that.' So I guess he prayed about it and he came. Got him up on stage and he started playing guitar. One thing led to another, and Albert and I started playing together. I go way back in the punk rock era, and so does Albert. We started jamming together, and we had a unique fit, a chemistry that knit together really well. He started writing music and I started laying down drum tracks. We started doing an event every week for the kids called Back To Life. It was geared towards playing heavy-edge music, punk music. We ended up starting to bring in that music in our facility, the indoor skate park. Next thing you know, we're writing a lot of music, we started recording music, then we got a bass player. We've been through quite a few bass players. Billy Livengood, who is our bass player now, has been with us for a while.

Albert: Just for the record, though, he is the best that we've ever had. We had practise last night, and hearing Matthew and Billy was like butter in my ears.

Matthew: I've played with a lot of bass players, and Billy and I are tight. We have a really good chemistry. Not only that, he's an awesome man. He's a great fit for us. So we ended up forming the band. We were originally called C:28, which was Commission 28. We were out there jamming, doing all kinds of shows in Phoenix and wherever God would open up a door. This band has been through a lot. Albert lost three of his fingers on his picking hand.

Matthew: That's when we were in the thick of playing awesome shows with Voodoo Glowskulls - really getting out there. He ended up chopping off his fingers at his workplace. That was a hard blow for us as a band, but we stuck it out together. We prayed and knew that God had a plan for us. We were going to keep motivated, keep moving forward. I ended up developing and making a pick for his thumb so he could continue to play. We had fans out there learning our songs and Facebooking us: 'I've learned the songs. Albert can just sing on the mic - I'll play guitar!' It was a really awesome time for us because our eyes are open to the fact that there are so many amazing people out there that have a heart to help and to be a part of something. That helped us grow closer to our fanbase. What we really do is to go out there and make a difference to people's lives, to encourage. We were shown a lot of love, so that captivated us, and here we are today, talking to you way out in the UK.

Tony: I know you're from Arizona, but your sound resembles something from the Californian punk scene.

Albert: The funny thing is that me and Matthew are from California. Matthew was born and raised there; I was born and raised there too. I was born and raised in Long Beach and San Pedro. I think there's a unique sound. When me and Matthew started playing together, we understood that SoCal skate-punk sound. Not that you had to be there, but we were born and raised in that era when skate-punk was getting really popular. For me, when I started first playing guitar in like 1992, Pennywise was really popular, and No Offense, Lagwagon, Bad Religion were just coming out with their best albums. That kind of stuff is really ingrained in the way that I write and the way that I play. Matthew too has a lot of experience in that era, so when we come together - that era and Matthew's skill mixed with mine - it's just a chemistry. Billy has a lot of experience in Pantera, Slayer. He's a very diverse individual - one of the most diverse musical persons I've ever played with. Really awesome stuff, unique bands I've never heard of. You put all of that stuff together and you have a lot of good ideas and a lot of amazing players. It's not like you're playing with one-trick ponies who know how to shred, and that's the only thing they can do. We have a lot of history in one whole. 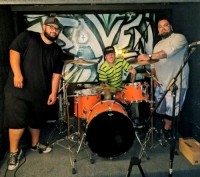 Tony: I understand you had some releases as C:28.

Albert: We had a couple of demos - homemade recordings. Our first one was called 'Redemption' and that came out 2015, then we had one called 'Take Cover' that came out the following year. 'Life Or Death' came out either the end of the same year or the beginning of next year. In 2017 we went to California as C:28 and recorded with Darian Rundall, who has recorded with Suicidal Tendencies and Pennywise. Our CD was titled 'Never Taste Death', and we have now re-released that as Reliance, and it's now called 'The Redemption EP'.

Tony: I'm struck by the quality of your 'Crashing Down' EP. I can't remember a band having four out of five tracks from an independent EP being selected for radio play.

Albert: Let's give credit where credit's due here. We went to Dave Klein in Los Angeles, the drummer of Agent Orange. Dave Klein is a recording engineer and a friend. He really made us feel comfortable in the studio. He made us bring out our creativity, made us feel relaxed, and I think that brought out the most and really made us play our best and lay the best tracks down. We have noticed because we've recorded a lot of demos in the past. After we were done with Dave Klein, we sent our tracks to the Blasting Room in Colorado to have Bill Stevenson of the Descendents mix and master it. We sent it over to Bill Stevenson, and he's a magician. Dave Klein gave us a warning when we got the recording: 'This is just a rough, rough recording. Don't expect it to sound loud and amazing and crisp and clear.' We heard it, and he was right. From the time that we sent it to Bill and Jason from the Blasting Room, we got it back in 10 days. Me and Matthew, sat in the car, had goosebumps. "Broken Bottles" and "Not This Time" - it sounded like a whole different band. We go, "That sounds so good. You can hear everything that we're doing." We were blown away.

For more on Reliance visit the Reliance artist profile