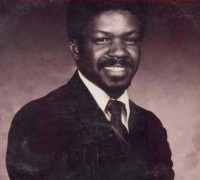 Reverend Dr C Dexter Wise is today a Harvard educated pastor and social activist who is probably best known as being the co-founder of Columbus, Ohio's Martin Luther King Breakfast, the annual event which brings in more than 6,000 people making it the nation's largest prayer breakfast. What many of the throng that gather for this event probably don't know is that this extraordinary minister of the Gospel is also a seminal figure in the development of Christian hip-hop. In the mid '80s Wise released singles and albums, one of which "I Ain't Into That!" gained UK release by Cool Tempo Records and peaked at number 14 in the dance charts. Although The Rappin' Reverend, as he was once known, has today many more activities to keep him occupied, he has never lost his passion for communicating the Gospel with today's youth.

Talking about his rapping days he said, "It seemed to me that it wasn't because the Church didn't have the answer, it's just we weren't packaging it in a form that was palatable or understandable or acceptable to them. I was the pastor of a large Baptist church, over a hundred years old, and you can imagine the kind of stir it caused when I became The Rappin' Reverend. In many ways I was a pioneer because I was rapping when no one else in the Church was doing it. And now everybody's doing it! It's very seldom now that you see a gospel album released without one rap song on it, or a little piece of rap on it. So in that way we kinda started it. But we took a lot of heat in the beginning."

Wise was called to preach at just 12 years of age. Four years later he would be officially licensed to preach and at the age of 19 he was ordained. Between the years 1977-82 Wise served as a pastor of Columbus, Ohio's historic Shiloh Baptist Church. His prayers, passion and powerful preaching saw the membership grow from six members to a staggering 500 plus in the space of a month. However, Dexter's finest and boldest hour was yet to come.

He explained, "I was 27 when I became its pastor; when I started rapping I was in my early 30s. So there was already a generational situation there. Some of the older people thought [my rapping] was the worst thing that had ever happened. But their grandchildren started requesting and quoting and reciting and rapping, and so then I became a hero. But originally it was like, 'I don't believe our pastor's doing that. It's so disgraceful and distasteful. It's terrible.' But ultimately everybody came around." Although rap and hip-hop have many of their musical origins in the Church (for evidence of this listen to the compilation album 'The Roots Of Rap' or Document Records albums of pre-war preachers like Rev J M Gates and Rev J C Burnett) the culturally conservative elements in the African American church were making the same disapproving noises about rap that they once made about the blues. But ignoring the cultural prejudice and lousy theology that labelled rap the Devil's music The Rappin' Reverend kept on going. He said, "God created the world through rapping, through speech. Rap goes back across our African heritage, through storytelling to music and so forth. If we go back far enough we find out that it's not crazy, it's just something we haven't dug up in a while."

Dexter's debut album "I Ain't Into That!" released in 1987 on a little label organised by the church created a lot of interest and the title track from it got considerable airplay in Detroit (not to mention a release on seven inch and 12 inch single in the UK). Said the reverend, "It was just obvious to me that it was more important to reach a lost generation than it was for me to worry about what people would think about me. I think that I did the right thing in that regard."

Dexter recorded a second rap album 'Crack Attack!'. Looking back at his time in the rap spotlight Dexter commented, "The funny thing about it is that I don't particularly like rap music myself - never have. I didn't like it when I did The Rappin' Reverend. But I saw that we were losing a whole generation of young people to drugs, to crime, to alcohol, just plain negative lifestyles". Even decades after his short lived recording career Dexter still encounters signs of his influence. "A lady came up to me about two weeks ago, and she's having a release of a CD, this Friday I believe. She came up to me in tears the first time I met her, saying how much she was influenced by my rap music."

Away from the music Dr C Dexter was a devoted family man, with wife Shirley (since 1973), his three daughters, Sybil, Sheri and Shonna and his only son Ceylon. Wise also has four grand-daughters. As well as preaching and teaching Dexter Wise is the founder and president of a community development corporation by the name of Faith No More. He told Cross Rhythms in closing, "You just kinda figure and know that the stuff you have is good; you put it out there and you trust it's helping somebody".

The opinions expressed in this article are not necessarily those held by Cross Rhythms. Any expressed views were accurate at the time of publishing but may or may not reflect the views of the individuals concerned at a later date.
About Ben Gilligan
Ben Gilligan is currently studying music journalism at Staffordshire University.

I would very much appreciate finding a recording of Dr. Wise rapping about the three in the fire from Daniel! I remember his doing the song at a school years ago. I am teaching Daniel in our Bible study!

I am a member of IFFM Nigeria, intending to attend the 10th convocation of IFFM next month.Am looking forward to Revd.Dr Dexter Wise,where I wish to use the opportunity of seeing him, discuss my music dream as an upcoming gospel artist with him. I love music and I would like Dr Wise to package me to the world,

i would like to know if your church organise the Fourth Annual Convocation of IFFM
Tuesday July 19 - Sunday, July 24, 2011