Of all the powerful and challenging songs on the critically praised album 'Nine Beats To The Bar' by the Nine Beats Collective, the most extraordinary is "#blessed" written and sung by Rev Vince Anderson. The reverend ministers at an Episcopalian church in Brooklyn, New York, and has recorded five albums. Vince's "#blessed", in addition to being a contemplation of the Lord's Beatitude "blessed are the poor in spirit," is a satirical critique of our materialistic culture.

The lyrics go: "Got up and read the news today/Will these bad times ever go away?/So much turmoil, so much strife/Glad it doesn't affect my life/Black lives matter until they don't give me another TV show/I can't watch, avoid this mess and thank my God I'm blessed/Let's go chase some Pokemon/And forget about all those who have been wronged/By a system that only cares for me/Not for the homeless guy on the street/I don't like real life reality/Just give me the kind that's on TV/You best believed I'm blessed, blessed, blessed/You know I'm blessed, blessed, blessed.

"Yes I'm #blessed./London this one's for you/New York City it's for you too/Good morning Babylon I say/Everything will go our way/Keep our air rarefied/Like our flats our souls are gentrified/We are a cut above the rest/Declare to the world we're blessed, blessed, blessed/I will fight to stay on top/My momentum can't be stopped/Humility it's not for me/Like Gordon Gecko I like greed/Privileged you know I am/I have been since time began/I've got the power I've got the wealth/You best believe that I'm blessed, blessed, blessed."

Vince explained, "The idea behind the song '#blessed' came when we started talking as a collective about how to communicate the Beatitudes to contemporary society where we live. I saw a problem in terms of how the culture uses the word blessed. I saw a problem and hence '#blessed'. You see on Instagram and Twitter 'I got a new job today #blessed' or they take a picture of their food on Instagram and '#blessed'. I thought it was maybe not a misinterpretation of the word blessed but definitely not a full interpretation. I wanted to create a satirical piece that criticises the way we used the word blessed and it was a character that isn't necessarily me - but on some days, it might be! But that idea that blessing is a personal thing, that we are blessed when we receive goods and services, is the complete opposite of what the Beatitudes are about. I felt that at some point on the album we needed to be prophetic about that and make fun of that materialistic notion to be able to get there." 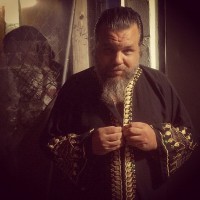 I responded by pointing out the materialism in the church where we get some TV preachers in their Â£10 million dollar homes and churchgoers who have little or no regard for the community beyond their own loved ones. Vince said, "The Church lives in the world, right, which is always going to have an element of people that use it to gain power and wealth. Very often they use the word blessed as a justification of that. It certainly isn't just a Christian problem; this idea that the more I get, the more I'm living right, the more I'm taking care of myself and my family. You hear this term a lot: 'I'm just trying to take care of my family'. Well, are you? Are you really trying to take care of your family because all I see is greed, all I see is you collecting things. Is that really taking care of your family? Because if you were taking care of your family, I would say that you would be concerned by the world that your family lives in. It's this very insular thing that I see. I see this not just as a Christian phenomenon, although as you mentioned it does become that because Christians insulate themselves into the particular tribe they call themselves and what happens is that all insulation does is become a place where you can gather up junk. It becomes a little fence for you to collect all the things that you think make you feel safe. This isn't it, this is not the Gospel, this isn't anywhere near the Gospel, this is the exact opposite of the Gospel. For me it's not just a Christian problem but right now I feel it's a universal problem we're dealing with, of people saying that safety is found by the amount of things that you have, and your portfolio. It is so far from the truth because everything else is crumbling around us but we have our wall of crap that we think will protect us - but it won't."

Vince was born in Escondido, California in 1970. He describes his background as an "upper-working-class background," his father was a salesman and his mother an educator. He said, "I was raised Lutheran which had its own particularities." After coming to faith Vince felt the call to be ordained. He said, "I wasn't quite comfortable in the Lutheran church so I was trying to find any church that would have me and have my people. The vision that I had for the church or that I felt God had for me, was that I wanted a church of misfits, because I myself am a misfit as far as society views me because I'm an artist - my mind goes in different places. Even though I was raised in the church I always felt like I was on the outside of it as an artist, I was marginalised. But I found a way into the church that I felt was real and authentic. I wanted a church that welcomed all my freaks, all my friends, all my artists, all my outcasts, all of my people who were marginalised that my friends in the church would be very suspicious of. I wanted a church of those people. It ended up with me forming my own church called Barstool Tabernacle at the back of a bar. Those people called me in a sense, it wasn't that I was a minister of the church. The people who actually wanted that church (who weren't Christians) saw me as their spiritual leader and said yes, so we had to make a church around this."

Possessing a prodigious keyboard style and a raspingly bluesy voice Rev Anderson began to record albums, the first in 2000 called 'I Need Jesus'. Then in 2004 came 'The Thirteenth Apostle' and then 'The Blackout Sessions'. Said Vince, "That was actually recorded during a blackout. We recorded it with a generator; just me on organ and rhythm machine. The great blackout, I forget when but when the whole of New York City had a blackout." Then came the wonderfully named 'Texas Barroom Revival', an EP with Boxcar Satan in 2004 and finally '100% Jesus' (2006). He said, "We're working on a live record currently because I don't like to record in studios. You hear the term recording artist, well I'm a live artist then. I feel like that's where the communication happens. We do a Monday night residency in Brooklyn and we're celebrating 20 years of every Monday night for the last 20 years at a club in Brooklyn."

Vince is music director and artist in residence at Bushwick Abbey, which is in Bushwick, Brooklyn. He said, "It's an Episcopal congregation and I write all the service music there. Steve Bassett (the songwriter and visionary behind the 'Nine Beats To The Bar' project) came to worship one day and saw me there and said, 'I think this is one of the guys'. He was travelling all over the world collecting all of us for the album. We were not trying to set the Beatitudes to music necessarily but rather provide a soundtrack to them, and not even a soundtrack but more of a soundscape. We were interested in collecting all of the Beatitudes and hearing them. What arose out of our collaborations resulted in the album. There wasn't a method of, you've got the lament, you've got 'blessed are the poor in spirit', you've got 'blessed are the meek'. It wasn't that kind of thing, it was more that we let this stuff soak in and rise to the top. I believe the album has a great deal to communicate to people."