Tony Cummings reports on RICK CUA who after playing with million sellers The Outlaws, and years of CCM stardom, has returned with a new album.

The release of Rick Cua's 'Won't Fade Away' album brings back onto the scene one of the seen-it-all, done-it-all figures of American rock music. Rick was or is a CCM recording star, one-time member of a million selling mainstream band, a record producer, head of a major Christian music publisher, a book author, a record company owner, a highly recorded session bass player and an ordained minister. It's been a 10 year gap between the release of 'Won't Fade Away' and Rick's 'Like A Cool Drink' album. Cross Rhythms began by asking the seasoned veteran what made him record a new album after such a long spell away. He responded, "Although I have loved all that God has allowed me to do in these past 10 years, I also felt a void. After much prayer and contemplation and a bunch of new songs showing up I decided to get busier with frontline ministry once again. Ministry has always been our focus but I am making even more room for it these days through music, speaking and the new CD."

So what could Rick say he'd learnt from his lengthy sabbatical? "God has big plans for us all as we move through life. Be true to who you are in Christ and the giftings and talents he has given you. Look straight ahead with confidence in Jesus and he will surely direct your steps!"

Rick is brimming over with enthusiasm about his new album. "I think 'Won't Fade Away' has all the DNA of old Cua records but with the natural progression that you would hopefully expect from a musician who is aware of the times both spiritually and sonically. I wanted this project to sound modern but not try to clone what the younger guys are doing. I feel this new CD is exactly who I am today which is a mix of what I have learned and loved throughout my musical and spiritual life."

'Won't Fade Away' was produced by Tony Morra. Commented Rick, "I have known and played with Tony for nearly the last 10 years. I love his drumming and Tony as a person. He is a fellow New Yorker and has incredible passion. He is a musician's musician and gets who I am musically. I listened to a few things Tony recently produced and knew it would be a great fit. Although I have worked with great A&R and label guys, getting to make a record on my own has allowed me to chase after the art 100 per cent and not the marketplace." 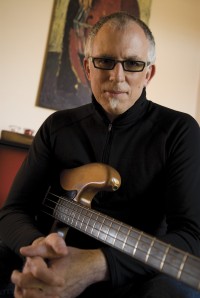 Originally from Syracuse, New York, Rick's Italian heritage is apparent in his first instrument - as a young boy, he started on the accordion. He eventually moved on to the piano, trumpet, clarinet, guitar and eventually settled on the bass guitar - and rock music. Membership in early bands fed his musical obsession and led to playing gigs by age 14 and an inevitable career choice. He played in a fairly successful regional group called CRAC (an acronym formed from the surnames of its members). Raised a faithful Roman Catholic Rick got saved when he attended a nondenominational Pentecostal church in 1977. His wife, Diana, who'd become a believer in 1972, prayed faithfully for Rick until he too found Christ. Rick continued to work in the music mainstream. He explained, "Those of us that got saved in New York at that time, we just got saved. We cleaned up our life, we loved the Lord, but we kept doing what we were doing career wise. We were professional musicians. We played music and we went home." In 1979 Rick joined The Outlaws, the Southern rock band who scored three million selling albums.

While still a member of The Outlaws, singer, drummer and one-time member of Wings Joe English introduced Rick to the fledgling world of contemporary Christian music and more specifically Refuge Records whose debut album with English had produced a number one Christian radio hit. In 1982 Rick's Christian music debut, 'Koo-ah' - recorded when Rick was still a member of The Outlaws - was released by Refuge. It too landed a number one Christian radio hit with the song "You Can Still Rock And Roll" which the Encyclopedia Of Contemporary Christian Music described as "a Joan Jett-like anthem promising youth that God and good music are not incompatible." In interviews Cua promised his audience that he would always be a rocker. "10 years from now I will not be turning out love ballads with violins." For the most part he kept his word as more successful CCM albums followed. In 1983 Refuge released 'No Mystery' which featured the fiery rock guitar of Ian Bairnson of the Alan Parsons Project and then, after signing with Sparrow Records the punchy blues rock of 'You're My Road' (1985) produced by Dave Perkins, Cua's frequent guitarist, rocked even harder.

More of the same came with 'Wear Your Colors' (1986) but by the time Rick signed with Reunion Records in 1988 executives were urging the singer/bassist to adopt a softer sound that "would attract more female listeners." 'Can't Stand Too Tall' followed with a radio-pleasing pop sound which included an acoustic duet with Ron Henby of The Imperials. 1989's 'Midnight Sun' produced big US Christian radio hits with a soulful Hall And Oates-style ballad "I'll Be Satisfied" and "Young Boy, Young Girl", a duet with Rebecca Sparks about exercising self-control until marriage. 1991's 'Within Reach' produced Christian radio hits with the rockers "Message Of Love" and "Heaven Won't Stop The Rain" while 1992's 'The Way Love Is', although rather disparagingly described by CCM magazine as "white bread power pop," scored with the turntable hit "What If?" In 1992 Rick left Reunion and formed his own label, UCA.

But though UCA albums 'Songs To Live By' (1993), 'Times Ten' (1995) - featuring the autobiographical rocker "Italo Americano" with a chorus in Italian - and 'Like A Cool Drink' (1997) contained some excellent stuff, Rick wasn't getting the radio support he had once enjoyed. But though Rick was no longer gracing the front cover of CCM magazine, he was very much involved in the industry. For five years he served as a music publishing executive. He said about that time, "My years at EMI Christian Music Publishing were wonderful! Although I had a pretty good grip on the business of music prior to getting there, EMI was a big dose of higher education! I was very privileged to work with my friends and relate to our writers as a music business professional and also as an artist/songwriter. I hope my decisions and advice to the folks I came in contact with were well balanced because of that."

Rick has also been an ordained minister for more than 15 years. He told Cross Rhythms about his church commitment, "Diana and I attend Grace Chapel in Leiper's Fork, Tennessee. We lead a small group and I am in rotation on the worship team. Church and small group life has always been a very important part of our lives. We pastored a home church for a season as well. I made the decision to seek ordination in the late '80s in order to line up with other men of God. I didn't want to be a lone wolf but rather part of a community of pastors and ministers united for a common purpose."

Rick thinks that the 'Won't Fade Away' album is "possibly my best work." He spoke about the title song on the project, which he co-wrote with Gary Sadler. "This song was inspired by final words from Fred Caserta, co-founder of Kingdom Bound Ministries, to Mike Failla the evening before Fred went home to be with the Lord. In those final hours Fred didn't say much but when he did speak we hung on every word. This song is a reminder to us all that Jesus will never fade away and when we have the Lord working in and through us.neither will we."

Another outstanding song on the project is "I Love My Life". Said Rick, "The idea behind this song was to write an anthem that celebrates our love for the beautiful life God has given us. We have so much opportunity and purpose for being alive. The bridge reminds us that we do have sorrow and pain but we do not go through our trials alone. With Jesus, and by lifting him up, we rise above the stuff that wants to drag us down. Gary Sadler dialled into the idea and made it happen as he always does. The guitar and bass following the vocal melody just before the chorus sets us up for the beefy hook that follows."

Rick is itching to get out and gig the songs on 'Won't Fade Away'. He commented, "I love to get out and play, I really do. I love teaching. But then, I love talking and teaching about worship and songwriting, and wrapping the Word around all of that. In recent years I have become aware of the fact that I am ministering as a player and as a coach. Not only passing along my experience through mentoring but by modelling it as well. Music is such a motivator. When you put the truth in music, and you hit that emotional nerve, it works. I feel called to build people up. My goal is to take the Word and Godly principles and attach it to music that is going to get them pumped up and want to sing along and want to believe what they are hearing and what they are singing.as an artist, that's what it's about."

rick is a very talented musician and friend...played together in different groups for years.give him a few pointers durring our friendship, and from there on he surrpassed great bass playing...i.m glad to be his music brother all these years...god bless..

Raised a faithful Roman Catholic Rick got saved when he attended a nondenominational Pentecostal church in 1977. His wife, Diana, who'd become a believer in 1972, prayed faithfully for Rick until he too found Christ. Rick continued to work in the music mainstream.
Although Rick would agree with your writing I pasted above, I find it arrogant and condescending being a lifelong Roman Catholic myself. The most essential element of being Catholic is accepting Jesus Christ as the Son of God and our Saviour, Who died on the Cross for our sins. No need to reply as I consider Born Agains as on the same side as me, too bad the feeling is not mutual. We (Catholics) are not going to hell for saying the Hail Mary.

Sorry, Tom, but Roman Catholics are not Christians at all. All those hail Mary's are not only a waste of time, but idolatry.