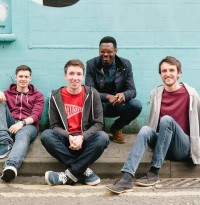 With their evocative electronica-tinged worship music, Salford-based Rivers & Robots have become mainstays of the British scene. Their albums 'All Things New' (2014) and 'The Eternal Son' (2016) have been praised by critics both in the UK and the USA. Their latest album 'Still Vol 1' has been released in CD and vinyl formats by Integrity Music and has surprised some of their legion of followers by being instrumental renditions of recent modern worship classics such as "Good Good Father", "The Lion And The Lamb" and "I Exalt Thee". Cross Rhythms met up with the band's singer, songwriter and keyboard player Jonathan Ogden and bass player Nathan Stirling and quizzed them about their last few years in music ministry.

Tony: How long have Rivers & Robots been going now?

Jonathan: I started it about six years ago as a solo, bedroom recording type project. Then from 2012 onwards we've been a band - coming up five years doing it that way.

Tony: I think you'd agree the Lord has blessed your steps.

Jonathan: Yeah, it's been amazing. When I first started out I didn't know if it was going to go anywhere. I liked writing songs and recording, and I just wanted to put something together, put it out. My initial vision was to see if it would reach some of my friends on Facebook. It ended up going round the world, and we get the opportunity to travel with it. It's amazing.

Tony: Have you been in the band since Jonathan started it, Nathan?

Nathan: I met Jonathan in 2012 over a sandwich. We made friends with each other, found out we were into the same styles of music and the same kind of Christian movements. We found out we're of the same sort of heart, and he asked me to join the band in 2012. So I've been playing bass for Rivers & Robots since 2012.

Jonathan: I'd never actually heard him play. I just knew I got on with him and I was like, "I want this guy in a band!"

Tony: Are you comfortable with being called a worship band?

Tony: When people hear the word "worship" they think of congregational worship.

Nathan: I think we need to expand our mindset on what being a worship band is. Some of that might involve singing together on a Sunday morning, and some of our songs could be used like that, but I think there's something about worship being an everyday thing. We spend a lot of time travelling around bars and clubs around the UK and Europe, leading worship for people in these different places; but it would be in a different context - maybe a context where non-Christians are there. I think worship is so much more than a one day thing. More than that - I don't want to get too deep, but it says, "The heavens declare the glory of God." Everywhere we go we can see the glory of God. Our songs don't have to be limited to a congregational setting. We can create art and create music that points people to Jesus and to the goodness of God. It doesn't need to be just a Sunday thing.

Jonathan: I think it's trying to stretch those boundaries musically as well. I wouldn't want it to be in a place where you could say, "This is a worship band," and you already have an idea of the sound of it - it's this style of music - because I think it can be varied, and so many different styles can be worship. Writing the massive congregational songs doesn't come naturally to me as a songwriter. I just had to write what was honest and natural to me. It's a different musical style but it's no less worship: I'm still singing to God, trying to glorify him through the songs we write.

Tony: How did Rivers & Robots come to sign with Integrity Music?