Tony Cummings charts the history of the ROBERTA MARTIN SINGERS 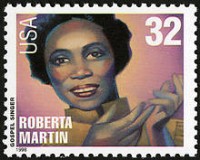 On 15th July 1998 the United States Postal Service issued four 32 cent commemorative stamps honouring four of the queens of gospel music - Mahalia Jackson, Clara Ward, Sister Rosetta Tharpe and Roberta Martin. Clearly those responsible for the stamps had a clear grasp of the huge importance of singer, pianist, composer, choral organiser, arranger and music publisher Martin who, before her death in 1969, had helped shape gospel music into the multi-million selling phenomenon it is today.

Roberta Martin was born Roberta Evelyn Winston on 12th February 1907 in Helena, Arkansas to William and Anna Winston. From the age of six, Roberta began to play piano and when the family, which included six children, moved to Chicago in 1917 continued to study piano. While attending Window Phillips High School, Roberta met Mildred Bryant Jones, the school's choral director, who began to instruct Roberta in piano and choral directing. Under Jones' tutorage, Roberta studied classical music and briefly aspired to becoming a concert pianist. But church was in her blood. She said in a 1964 interview, "I've been playing in churches nearly all my life, ever since I was so high. I started down at Pilgrim where I was the pianist for the Sunday School. At that time I was just interested in church hymns, anthems, choir music and secular songs. The first time I heard gospel singing as such was this lady and the men - Bertha Wise and her singers [from Augusta, Georgia]. Miss Wise played the piano for them. They came to our church, and oh, did we enjoy them. Actually, they were famous - they would go around to the National Baptist Convention and sing. They were not exactly singing gospel songs, but spirituals like gospel songs and the one that interested me the most was 'I Can Tell The World About This'. This was 1932."

Roberta was influenced by the blind pianist Arizona Dranes whose driving rhythmic mix of ragtime and barrelhouse piano playing was totally unlike the piano work of most religious recordings. In 1932, Roberta auditioned for Thomas Dorsey's and Theodore Frye's Young People's Choir at the Ebenezer Baptist Church, touted as one of the first gospel choirs. Roberta was hired as the choir's pianist due to her versatile skills as a singer, accompanist, arranger and director.

In 1933, Roberta Martin and Theodore Frye organised a male quartet with Martin as the accompanist and occasional soloist. By 1936, the group was renamed the Roberta Martin Singers. Writing about the early years of the Roberta Martin Singers Bil Carpenter wrote in his Uncloudy Days: The Gospel Music Encyclopedia, "Possessing a thick contralto, Martin was the lone female surrounded by Norsalus McKissick, Willie Webb, Robert Anderson, James Lawrence and Eugene Smith, who were all adolescents at the time. Martin's singers sang loudly and dramatically without a bass. Their sound was not harmonious. One could easily identify the backing voices. This lack of synchronicity made the group's urgent sound a distinctive and welcome change amid the repetitive quartets of the era."

Also distinctive was the material being performed by the Roberta Martin Singers. Taking the lead of her mentor, the Father Of Gospel Music, Thomas A Dorsey, Roberta recognised that one of the few ways one could earn money out of gospel music was through music publishing. She incorporated a publishing house in Chicago, the Roberta Martin Studio Of Music and was soon publishing her own compositions and those of other songwriters. By the 1940s, the group had become one of the first groups featuring male and female voices. Strong females such as Bessie Folk, Delois Barrett Campbell, Myrtle Scott and Lucy "Little Lucy" Smith Collier joined the group, adding a new flare. Other members at various times included Myrtle Jackson, Gloria Griffin, Romance Watson, Archie Dennis and Louise McCord. By 1947, the Roberta Martin Singers had begun their recording career. Their 78s on small labels like Fidelity, Religious Recordings and R.I.H. weren't particularly successful. In 1949, the group signed with Bess Berman's New York label Apollo Records who were by that time breaking all records for gospel 78 sales with Mahalia Jackson's "Move On Up A Little Higher". Although the Roberta Martin Singers' recording of "Only A Look" never quite reached the multi-million sales of "Move On Up", it was a major gospel hit and became a theme song the group always sung at the opening of their concerts. "Only A Look" was composed by Anna Shepherd but published by the Roberta Martin Studio Of Music. The song with lead soloists Bessie Folk and Delois Barrett established the Singers' sound.

Martin favored smooth harmonies and a subtle rhythmic dynamic in which her singers were slightly, almost imperceptibly, behind the beat. On slower songs Martin featured lead singers against a subdued background provided by the rest of the group; on jubilee and shout material she used the more energetic call-and-response technique typical of Holiness churches. Martin encouraged her singers to maintain their individual personalities, allowing the audience to distinguish each backup singer's voice rather than blending them into a single choral sound.

From 1949 to 1955, Apollo Records released a stream of singles, several of which were successful and, along with the early compositions of James Cleveland and Alex Bradford, brought money into the Roberta Martin Studio Of Music bank account.

As it turned out, Alex Bradford, a fine singer who was struggling to establish himself in the Chicago church scene, found Roberta's attitude towards him difficult to bear. In Anthony Heilbut's The Gospel Sound book Bradford reminisced, "'Roberta Martin and Mahalia owned Chicago. I remember when Bert introduced me. . .' and his voice becomes all phony gentility, 'Little Alec Bradford is with us, and we know him and we want Chicago to hear him', smiling one of her beautiful, deceitful smiles. . . Everybody was 'little' somebody to Roberta and Mahalia." 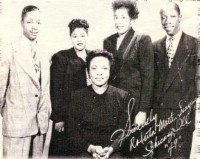 In 1957, the Roberta Martin Singers switched to New Jersey's Savoy Records. Big gospel hits such as "Certainly Lord" (1958), "God Is On The Throne" (1959) and "No Other Help I Know" (1961) followed. Savoy, who were discovering that the new big market in gospel music was the album, began releasing a stream of LPs by the Singers such as 'Spirituals' (1957), 'Grace' (1958), 'God Is Still On The Throne' (1959), 'Try Jesus' (1960), 'Since I Met Him' (1961) and 'It Was The Blood' (1962) all of which kept Roberta and her fiery gospel vocalists on America's gospel radio station airwaves. The international popularity of African-American gospel music affected Roberta. In 1963 the singer was featured at Gian-Carlo Menotti's Spoleto Festival Of Two Worlds in Italy.

As well as her vocal arrangement style, Martin was equally admired for her piano playing. In his book The Golden Age Of Gospel Horace Clarence Boyer wrote, "Roberta's piano style was marked by nuance and refinement rather than virtuosity. She played mainly in the middle of the piano, introducing chords - magnificently voiced - that she borrowed from the Western European classical music she had studied and that were new to gospel. She emphasized the first beat of each musical unit in the middle of the piano and provided her own response by answering this beat with secondary beats at the upper ranges of the keyboard. One of her trademarks was bringing a song to a 'retard' (slowing down) at the end, followed by cascading chords all the way to the upper extremes of the keyboard." In 1963, Savoy released the 'From Out Of Nowhere' album followed by 'The Failure Is Not In God It's In Me' (1964), 'He Has Done Great Things For Me' (1966) and 'Prayer' (1967). By then the gospel matriarch was battling with cancer though she did come back to record a final album with her Singers, 'Praise God (From Whom All Blessings Flow)'. That album featured the moving recording "I Have Hope", which was written by her good friend Jessie Jimerson (aka Jessie Jimerson-Phillips.) Her group disbanded upon her death in 1969, but the surviving members continued to perform as a group in reunion concerts into the 21st century. Many of the members later had solo careers, such as Delois Barrett and Gloria Griffin, who was the composer of the classic gospel song "God Specializes", made famous by the Roberta Martin Singers in concerts and recordings. Roberta Martin died of cancer on 18th January 1969 at the age of 61. Well known and very popular in the African-American community, her funeral in Chicago attracted over 50,000 mourners.

During the lengthy career of the Roberta Martin Singers the group had several best sellers (though the six million-sellers claimed by Rosemary Radford Ruether in her book Encyclopedia Of Women And Religion In North America seems to be an exaggeration). What is undoubtedly true is that Roberta and her Singers made a huge contribution to gospel music history. It's a shame therefore that Malaco Records, the company who bought the rights to the vast Savoy catalogue, have served the memory of the Roberta Martin Singers so badly. While another gospel matriarch featured on those 1998 postage stamps, Mahalia Jackson, currently has 139 albums listed on iTunes, Roberta's sole listing is the 1990 CD compilation 'The Best Of The Roberta Martin Singers'.

Hi. Where can I get the album "It was the Blood" by the Roberta Martin singers made in 1962. Thx. John James

I REALLY LOVE YOUR IN-DEPTH ARTICLES ON OLDER ARTISTS.THEY ARE MUCH MORE INFORMATIVE THAN WIKIPEDIA.

Thank you for this information. The USPS refused to issue a stamp in honor of Thomas Dorsey saying they didn't recognize religious persons for stamps. I see that isn't true.