Roly Johnson: Songs of a shepherd 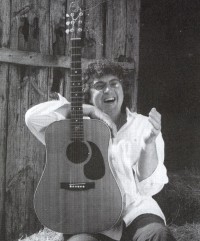 If the Biblical precedent of shepherding sheep of the woolly variety and strumming a stringed instrument in praise of God were foundational in creating a musical ministry of Davidic proportions, Roly Johnson would be a prime candidate for the post. Raised on the beautiful if bleak hills of Northumberland, Roly chuckles at my suggestion. "I just grew up on a hill farm in Northumberland and sheep were the mainstay of the farm. Sheep and people have a lot of similarities." He pauses before delivering the punch line, "But sheep are probably a lot more straightforward!"

Roly likes the country environment so it's inevitable that in my mind there is an image of Roly finding a quiet place on the hillside surrounded by sheep to strum his guitar and worship God. Has he done it? "Of course I have!" comes the swift reply. "Feels marvellous in the summer, when it's warm...never tried it in the winter! It's a peaceful sort of feeling. Sheep are quite peaceful animals if you leave them to wander and graze."

For Roly, the title song sums up the main theme of the album, as he explains, "The more baggage you carry on a journey, the harder it is to travel. You're always wondering if you've left something, or checking to see if you've got everything! Mostly we don't use half of what we carry anyway. If you change from planes to trains to taxis to buses and then end up walking, believe me, the less you carry, the better! It's the same in life. We spend so much time gathering 'things' that we end up being owned by the things instead of owning them. We carry our problems with us until we are so weighed down, we can hardly stand, instead of unloading them onto the Lord. Where we're going, we can't take anything with us anyway! What is it about life that makes so many of us ignore eternity? We spend our time gathering, acquiring, building...knowing that one day we'll have to leave it all behind. Crazy really!"

Admiral Cummings and I agree that the confessional "Paid My Dues" highlights everything that is good about Roly's music. Emotional vocals tell of his life in music as he explains, "I really have paid my dues! Travelling, writing, singing, struggling to make things work, make ends meet. I did anything to do with music, accepted even the strangest gigs because it seemed to me the only way to become a musician was to be one and live the life...which I did! I played with a band one night in a northern club...half way through the night, the committee decided to pay us off! The decision split the club right up the middle! They were fighting each other because of it. The guitarist went out the back and found two men throwing a guy against a wall...just 'cause he didn't like the band! They were hungry for blood."

Roly spent many years before and after his conversion to Christ playing in pubs and clubs. Roly's previous releases have included a single "Heaven Isn't Far" and a debut album 'Blue Skies Dark Nights' which were both self financed and released on cassette. For his latest album 'Travelling Light', Roly teamed up with veteran producer Rob Andrews and fellow musician Rob Ash to record at the legendary Chapel Lane studios and the result is a pristine shiny CD packed with well crafted songs showcasing Roly's fine voice and writing talents. Roly identifies the role of Rob Ash as a very key part of the making of 'Travelling Light' and acknowledges this by saying, "His ideas and commitment to the project were important as well as his superb guitar work. I love that! He also programmed rhythm tracks, played bass, mixed, engineered and he kept his cool pretty well...and survived!! Rob Ash and Rob Andrews are a great team to work with! "

Surprisingly one of the highlights of the album, the song "I Need A Saviour", was not written when Roly became a Christian. "I was already a Christian when I wrote this!" he confesses and continues, "Strange, really, that I should know my Saviour and yet realise that I need Him much more than I realised!"

That need is equally expressed on "Sweet Rain" but only because Roly's journey as an under-rated yet truly talented independent artist has been a long and sometimes difficult road. Roly is honest in his explanation, "One day, I just had to stop! I came to an end of everything I could do for Jesus, came to an end of words to say. I reached a place where I'd come too far to go back, but where I didn't have the strength to go on. I had no more resources left to rely on. I couldn't raise the energy to fight in this battle any more. I was finished! Everything I'd ever been involved in was history with nothing on the horizon. I was broke again and heavily in debt....I had nothing left to give. I was acutely aware of what God was calling me to do, and at the same time, I knew I couldn't do it! It was time to leave it all behind, to let the dreams and the vision fall to the ground and die. Time to move on. My life had to change...I knew that. What I didn't know was that my life had to end!

Reinhard Bonnke puts it so clearly, 'The Gospel is not an alternative lifestyle, it is an ultimatum!!' I could have called this song 'Brand New Day', but it is the sweet rain of Heaven that makes my new day possible!"

As well as playing gigs in the north of England, Roly has had the opportunity to travel wider afield and in particular has ministered in Russia. He explains, "I first went there in 1990 and travelled in and out intensively for a couple of years. Then it wasn't so often and then it picked up again! I remember my first trip. I had to travel on my own to meet Malcom Macpherson, the evangelist with whom I do a lot of my work. He'd gone on ahead and I arrived later. We descended into Moscow airport and it was grey, dull and wet! I was flying with BA and it was a lively, colourful, vibrant flight. I just didn't want to get off! I was the last person to leave the plane and I did so reluctantly. The airport itself was silent, dark and threatening with armed guards and airport personnel looking suspiciously (and impatiently) at me all the time. It took me ages to get over the culture shock."

In his trips to Russia, Roly has played in a variety of different venues. He thinks back and lists them, "Outreach concerts, church services, house groups, TV, universities, schools, I even played in a field recently!" He continues the list, "Theatres, auditoriums, trains! Anything that comes my way! It's always been like that and it probably always will. I'm a singer/songwriter and Russia is somewhere God chose to send me, so I sing and play my songs in Russia."

Roly takes a moment to reflect on some of the things he has seen happen in Russia. "I've seen all kinds of amazing, wonderful things that God has done while I was there singing and playing, but God always does these things in his mercy towards us, never because of us and usually in spite of us!! I'm more of an honoured spectator really, honoured because it is an honour to be where the King of the universe is at work. I've seen the blind see....the lame walk....the deaf hear.....all kinds of physical ailments healed as God moves among us....lives changed forever in the twinkling of an eye as someone is brought out from the kingdom of darkness into the Kingdom of light!! But it's all of God. He allows no-one to take his glory!"

If ever there was a grassroots artist who was working for the glory of God, it is Roly Johnson. He has reached a point where the eternal truths of the Christian life have become increasingly real. This is reflected on the album. I finally ask him about the song "I Wanna Be There" and Roly explained, "One day I got to thinking about Heaven! I mean, really thinking! This song came from that time. It's an amazing picture the Bible paints in the book of Revelation, when the angel puts that trumpet to his lips and blows. It's gonna happen! This age will come to an end some day and we will stand before the King of the universe and have to give an account of our lives and how we've lived on earth. I really do want to get to Heaven and I want as many people as possible to come with