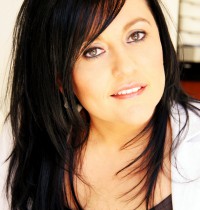 On 23rd and 24th June Kingston upon Hull's renowned Revive Church will be holding the Resonate event. Hosted by Revive's Jarrod Cooper, it promises to be a very special time with prophetic teacher Dan McCollum - part of the teaching faculty at Bethel Church, Redding, California; and Roma Waterman, the Australian founder of the Melbourne Gospel Choir and now an internationally known prophetic worship leader, songwriter, author and vocal coach (Roma was formerly a coach for Australia's The Voice/X-Factor). I first met Roma 14 years ago at New Zealand's Parachute Festival when she was one of the most popular figures in Australia's Christian music scene. I was keen to talk again to this most gifted and versatile of music ministers.

Tony: An awful lot is changed for you since we last met.

Roma: Yes it has. Then I was touring the world as a Christian singer/songwriter. I still do that but in more recent years I'm more leading worship. I'm probably most known in Australia as a spontaneous prophetic worship leader, that's what I love. And the thing that I love even more than that is raising up the next generation and training people. A couple of years back I started an online training school and I thought I'll just see how this goes and it exploded. We've got 9,000 students in 142 countries doing these courses. They range from singing lessons, to song writing, worship theology, worship leading. Vicki, Jarrod Cooper's wife, happened to do one of the courses and we became friends and started connecting. We started skyping and we've become great friends. She asked would I like to come to a conference in the UK, because she's actually started using some of the courses I put together in her training school, which is really exciting for us. So that's how the connection happened.

Tony: Does your training take in all stages, from people who are just beginning through to experienced worship leaders?

Roma: Yes, definitely. The courses are designed to be done at your own pace, in your own time. They are lifetime access courses. So if people are more experienced or more developed they might go through the course a lot quicker but there are all sorts of activations and exercises that people need to do. It depends on people's skills levels how much they want to contribute, how much they want to do. We find we have people from all different levels of experience doing the courses. We have people who are just delving into worship leading or just starting to sing who find it really valuable, but then we've also had people doing my singing courses who are backing vocals for the X Factor and The Voice and our vocal coaches themselves doing those courses. I've tried to cater for the beginner to the advanced singer. It just depends on the student, how much they want to put in, how much they get out of it.

Tony: Is there a particular emphasis in all of this on the prophetic? Are you encouraging all your students to be listening out for the now word of God and bringing that into their music?

Roma: That's a great question. Well, I get a lot of students from many different spheres so it's not all Christian which has been really interesting. So my singing courses, for example, are just straight singing courses. We've got people from the Middle East doing those courses and parts of Asia. We've got American war veterans who are in wheelchairs doing those courses. I actually got involved in trying to push those courses further than the Christian music industry or the worship ministry because I felt it was very valuable to do so. So that side, there are people from all walks of life. We've got a worship songwriting course and I've got a Releasing Heaven's Song course - I've written a book called Releasing Heaven's Song and the course is based around that on how to hear from the Lord and put that in as a worship leader or a musician, a song writer and practical steps around that. But also biblical replication and scriptural foundation because I find that a lot of people who love the prophetic, they need to know the word of God at the same time. I feel like we are very strategic as worshippers when we can move with the Holy Spirit but we also know what the Bible says about what we're doing. My worship courses do have a focus on the prophetic but the singing courses are just straight singing courses. It's interesting trying to navigate round that!

Tony: It's a very interesting time for worship ministry.

Roma: It is. I think the Lord is asking that all worship should be prophetic. I think we're scared of that word because everybody has an idea or they might have had a bad experience of what that means. Here's an example: I was asked to lead worship at a very traditional Bible college, here in Melbourne, Australia. And I'm thinking: why are they asking me? I'm the prophetic girl, I'm gonna scare people. I said to the Dean of the college, 'If I get an utterance from the Holy Spirit or if I feel to do something prophetic, can I do it?' And he said, 'No, I think you'll scare people off. Just play some songs.' Now, for me, that's really hard because that is my gift. Everyone has got a different gifting. For me, moving in the prophetic is like putting a pair of slippers on, I feel like I'm home. So I started to lead worship and I was going to be respectful, obviously, because that's what they've asked me to do. I started to lead and the Lord started talking to me saying, 'I want you to sing this out.' Oh, my god! 'This is so inappropriate that you're asking me to do this right now! Didn't you hear what the guy said?' So I'm having this conversation with the Lord as I'm playing the piano, and singing, and I'm getting sweaty palms thinking what can I do? And in the end, when you get that kind of unction, I would rather step out and be wrong than never step out and be right. That's my life motto.

I tried to use language that I knew people would understand, I think that's very important as a prophetic worshipper, not to use your own jargon. I said, 'When people pray, they pray from their heart and when we say to someone could you pray, could you lead us in prayer, a lot of people don't have words written on a page, they are reading the words that are on their heart; they are sharing something that is coming out of their heart.' And I said, 'I, as a worshipper, as a singer, I like to do that in song.' I didn't use the word prophetic once; I didn't use the word spontaneous. I just said, 'I would like to sing right now a prayer that is coming from my heart.' So I started to sing something out and when it got to the end all these people came up to me and said, 'Just before you said that the Lord started speaking to me and he said exactly what you sang out.' It was a big lesson that I learnt: the prophetic is appropriate all the time, it's just the way that you communicate the prophetic that is important.

I know I'm talking a lot but I wanted to say something also to what you said about the spirit of revival coming on worshipping. One of the things that we teach that I'm so passionate about: I love studying the history of revival. I read lots and lots of books on revivals that have happened around the world at different times and every single revival that you study had a sound. Billy Graham had Ira Sankey; Charles had John Wesley; modern day movements like Hillsong Music or Planetshakers in Australia, Bethel Music. Every revival had its own sound. Now, if that's true, as worshippers our role, our goal is to find that sound and that's our part to play in seeing revival come. I heard someone preach once that someone 200 years ago even said we could not tell you what came first; the songs or the message. They were so intertwined. I feel we're moving away from what is the top 40 hit that is gonna pull at people's heart strings to what is the sound that is going to carry revival. I have such an urgency and a hunger in my heart to see worshippers not just chasing after the awards or the accolades but actually thinking about the sound of firstly their church, then their region, then nation. What is the sound that we carry? That authenticity is going to break strongholds over the nations. I've got countless stories of people around the world that are doing this where amazing things have taken place. That's why I'm so passionate about the training aspect because I can go somewhere and do something and bless somebody but if I can be somewhere and disciple somebody to do it, it's happening all the time without me doing anything, do you know what I mean? I can go and have a cup of tea and cheer everybody on. We can do so much more.

Tony: Can you tell me a bit of your back-story, a rundown of your life so far?

Roma: I'll try and do this without being too Italian and talking a lot. I'm first generation Australian. My grandparents were Italian; they came out after the war in the '40s for a better life. My parents were seven or eight years old when they came to Australia. I grew up in a very loving, musical Italian family where the piano accordion was played at every event. I was taught the piano when I was four or five years old by my uncle. Ever since I can remember, all I've ever wanted to do was sing. Even before I was saved. When I was about 12 my mum got born again and I got radically born again too and just fell in love with the church, fell in love with worship. All I've ever wanted to do, I've never changed my mind. It's been hard. There have been years that interesting things have gone on. So when I was about 17 I recorded my first demo, two songs, started singing in churches and then when I got to 21 I signed a record deal with Word Australia - I don't know if you remember Word, Australia?

Tony: That first album, was that 'Talking Eyes'?